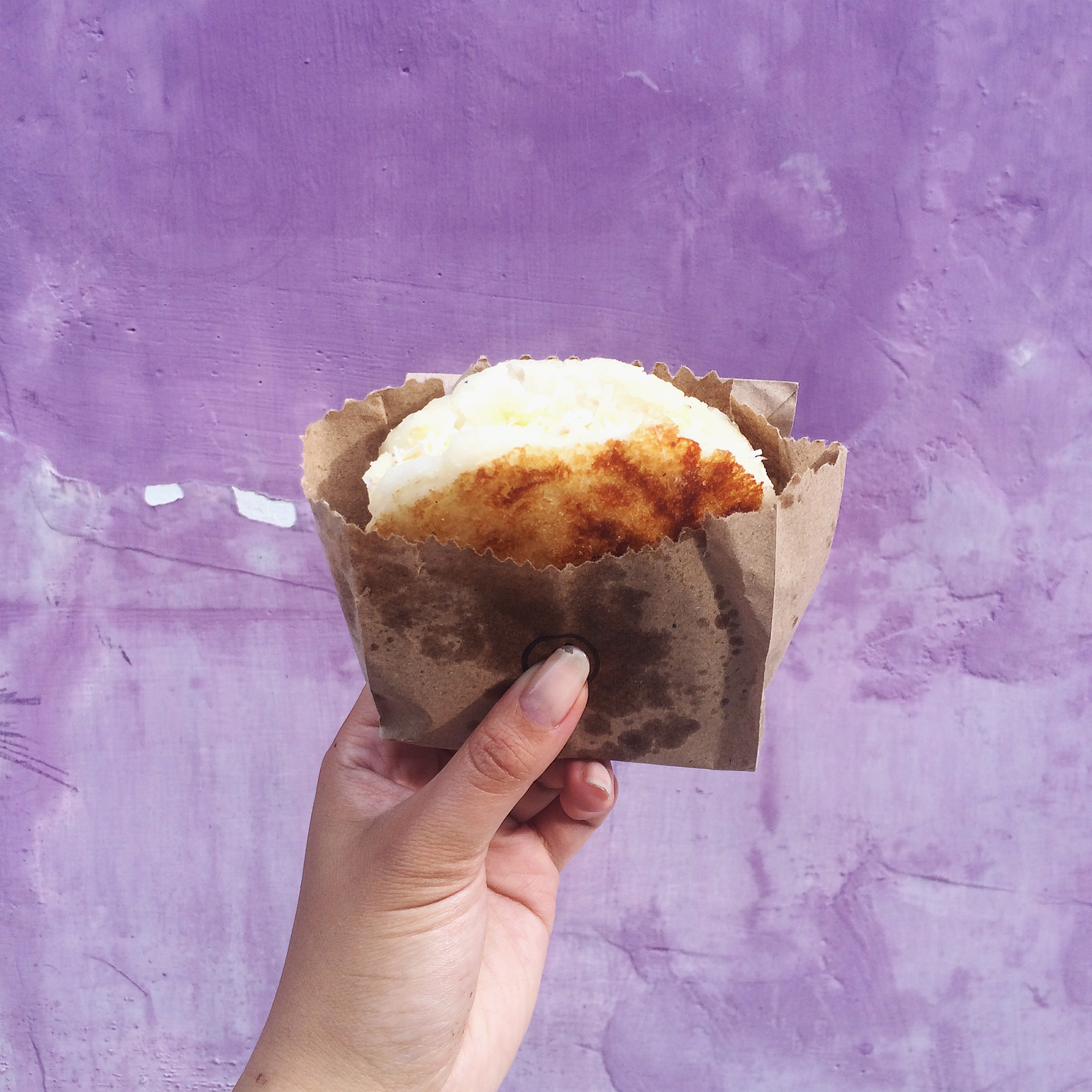 Before going to Colombia for the first time, I knew there was only one, authentic way I wanted to experience this South American country — by eating myself silly on Colombian street food.

When my roommate told me she had planned a trip to Ireland, I insisted that she absolutely had to have her first Guinness there. The first time I ever had one was in a little town in Cork. It was full and flavourful, reminiscent of their brown bread. When I returned home, deeply mired in vacation blues, I ordered the beer at a local bar but instead of being poured very slowly (because of how dense it is) from the tap, it arrived in a tall can and tasted so weak and watery in comparison.

Most of the time, food and drink is just better in the country it originated from which is why it’s a huge priority for me to try as much local cuisine as possible when I travel. This makes me transition back-and-forth seamlessly between a go-with-the-flow, up for anything persona to a terrifyingly shrill Type-A harpy with not one, but TWO bucket lists. Just for eating. Obviously. That’s why I always pack a loose-fitting muumuu.

My trip to Cartagena was no exception. I compulsively compiled my list of Colombian street food with the zeal of a portly child attacking their first post-“fitness” camp cupcake. One was a directory of restaurants that I wanted to hit, complete with notations of what dishes to try there. The second was for specific, local fare that I would try to make a point of tracking down and sampling before I left the country.

If you ever plan on visiting the vibrant and colourful Caribbean coastal city, devouring Colombian street food is the most authentic way to experience the culture. Try these 8 treats: 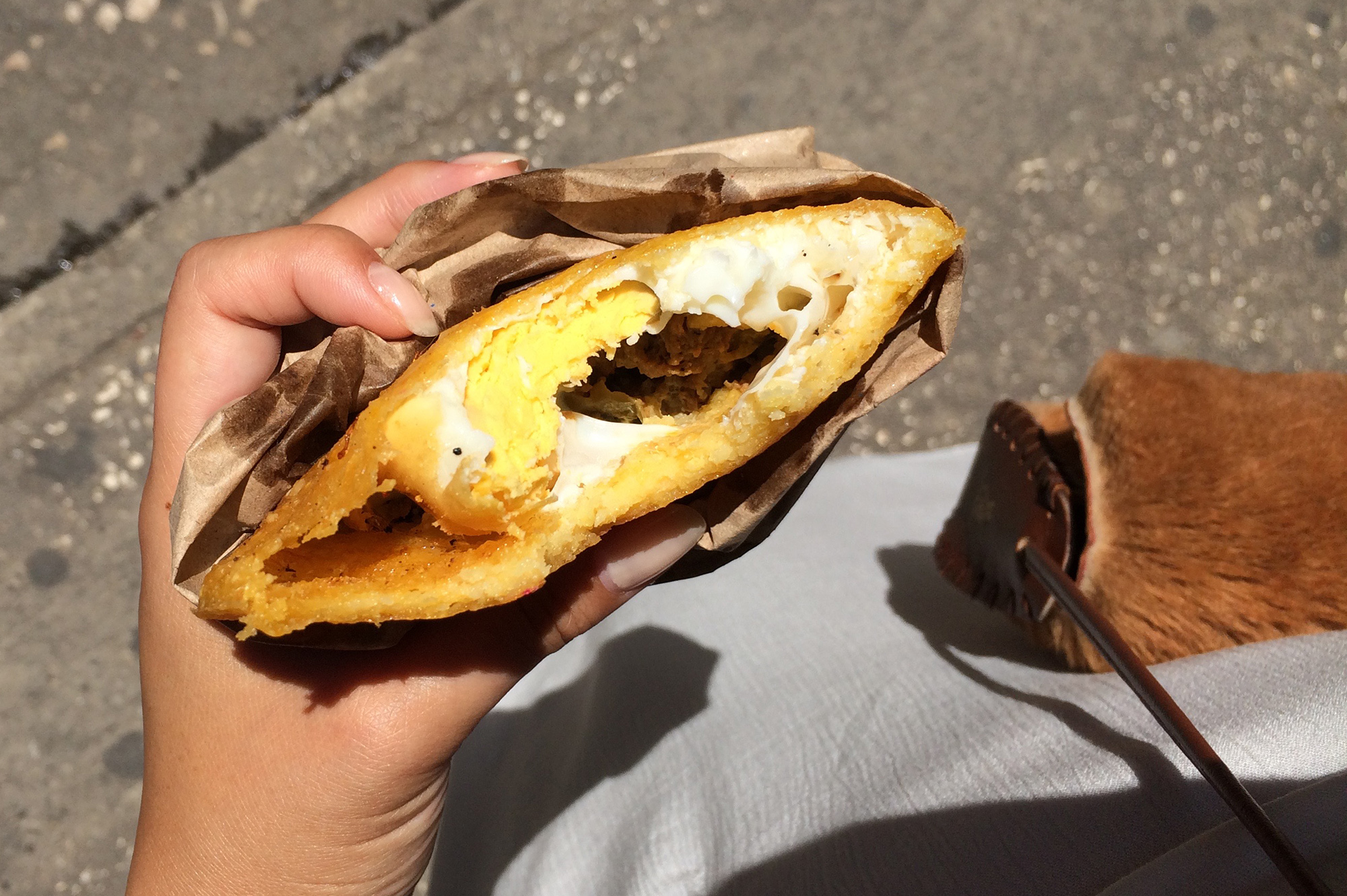 I’d heard of arepas before and they kept cropping up in lists of Colombian street food that I HAD to try but I didn’t realize how many varieties there were of these corn flour cakes. Occasionally we’d have the plain, pressed rounds with a side of eggs with breakfast but mostly we’d grab them from street vendors on a whim when a bout of hunger seized us.

Cooked fresh on a griddle, vendors would prepare arepa rellenas (stuffed arepas) filled with gooey queso (cheese) or my favourite, arepas de huevo that were deep-fried, golden yellow puffy pockets filled with a hardboiled egg, sometimes with cheese and meat. 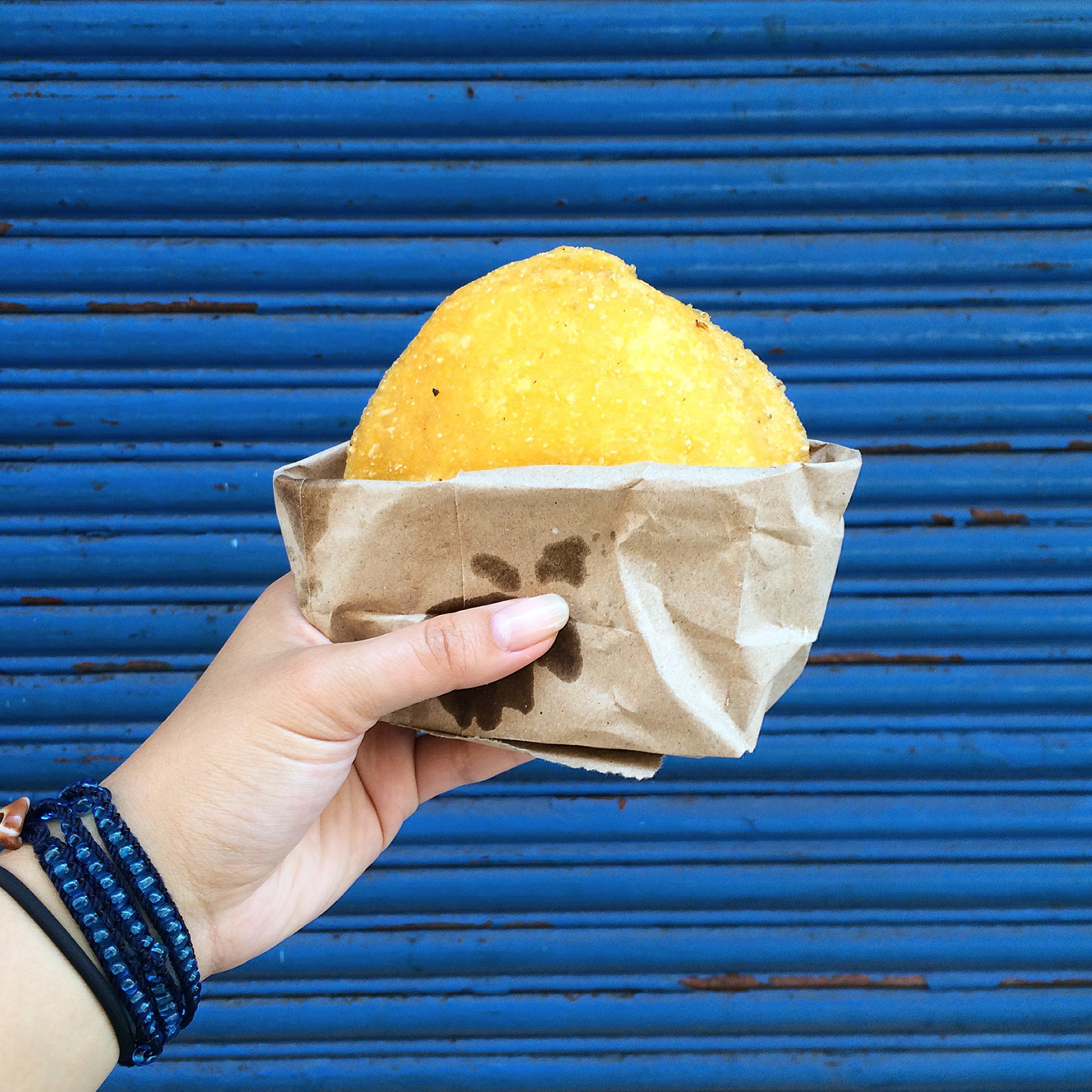 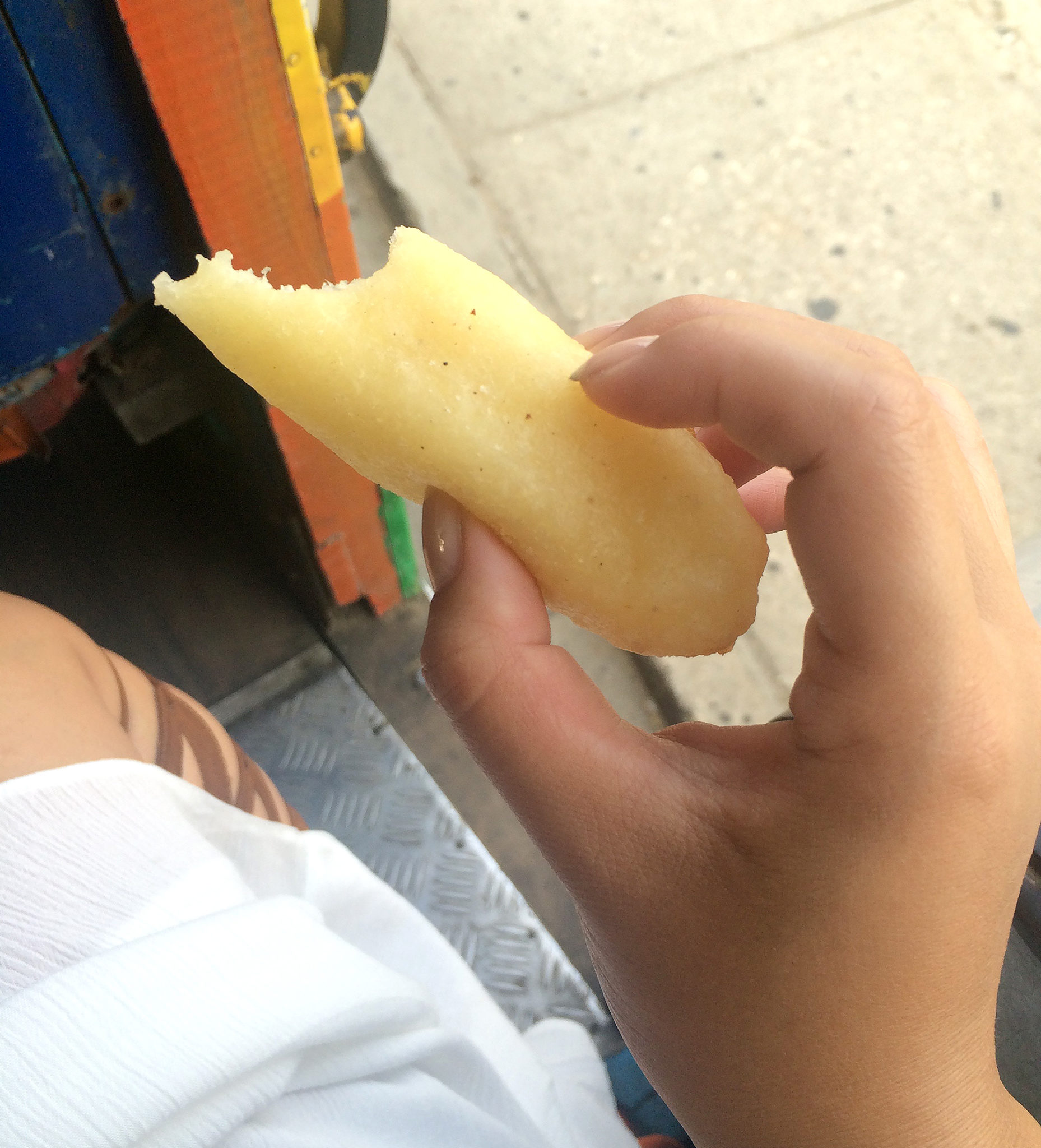 They don’t look like much, but I loved them! They’re torpedo-shaped yuca fritters, stuffed with either cheese and/or meat. This traditional Colombian street food is really filling as yuca is a root vegetable with a high starch content, similar to a potato. Really full from the arepa that I bought at the same time, I saved the carimañola for later but I actually preferred it cold, like cold fries. 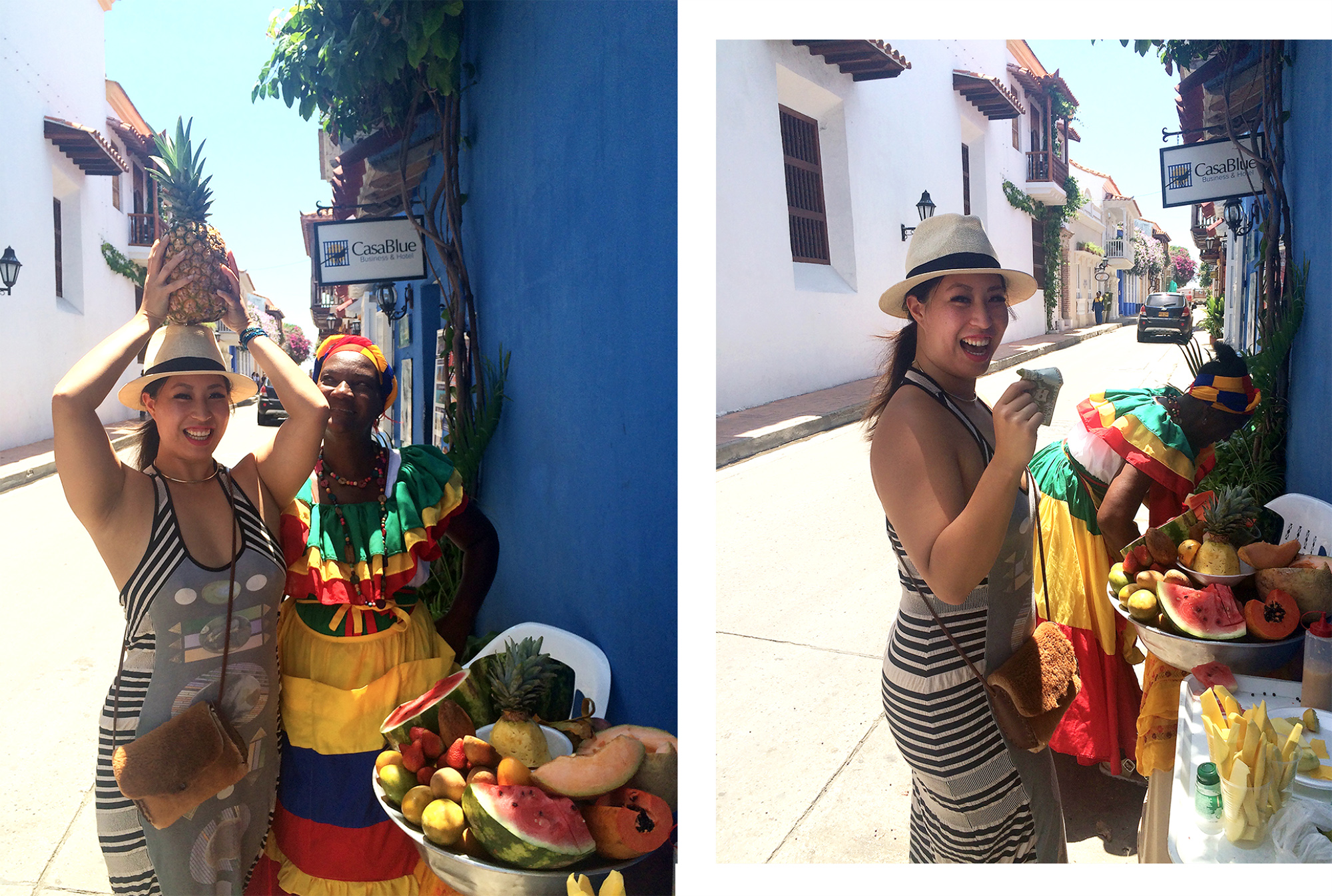 Ok, so fruit won’t really interfere with building abs as much as the rest of the items on this list but…fruits are carbs and some have a lot of sugar so they count for the purposes of this list! In Cartagena, I found locals so friendly, especially the women dressed in festive garb with carts displaying an impressive collection of Colombian fruits. They cut the fresh, juicy fruit, both familiar like papaya and watermelon and unfamiliar to me like lulo, drizzling it with condensed milk. 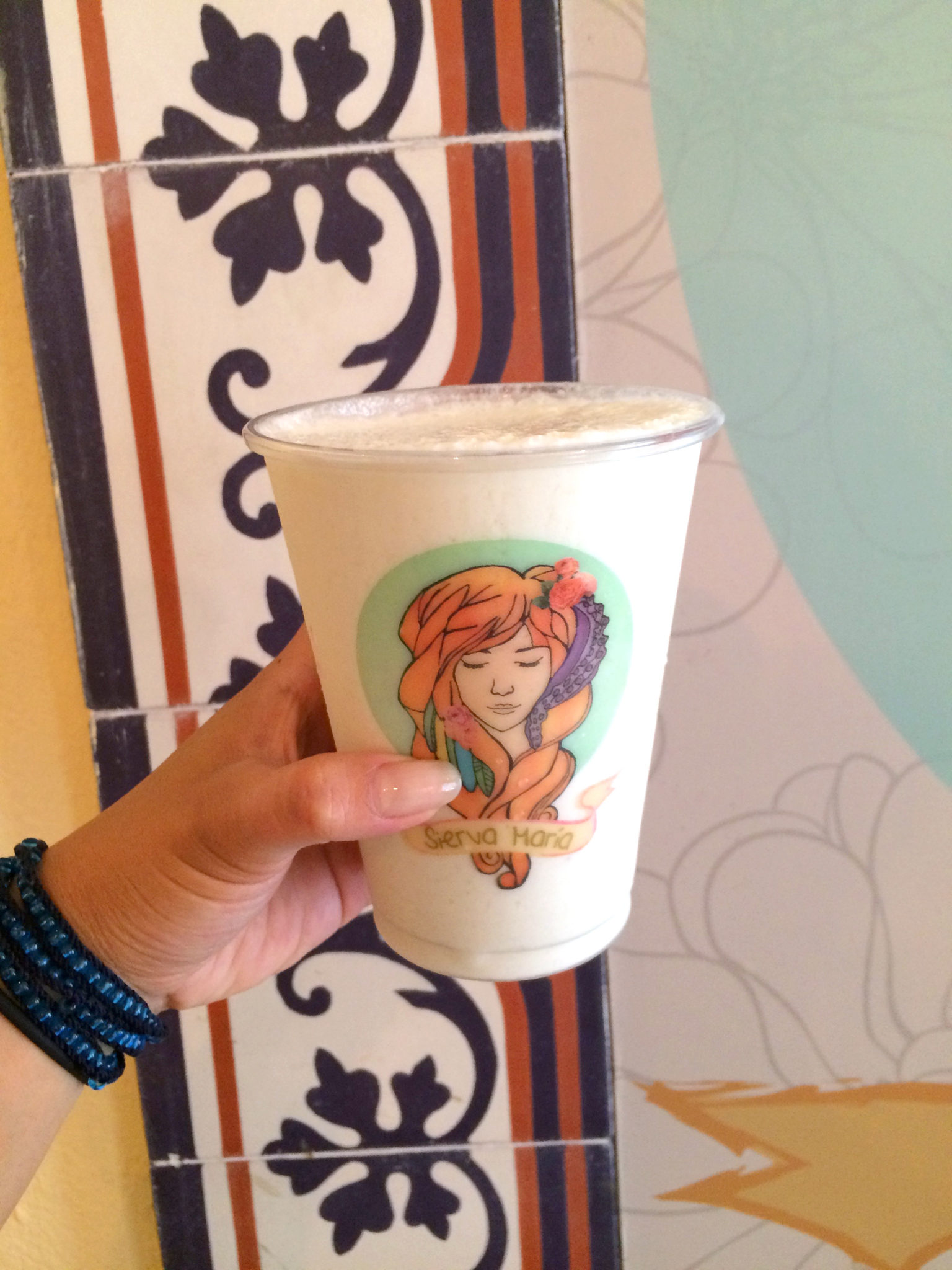 I was sweating balls in Cartagena. I would wash my hair and pin it into a low bun because I couldn’t bear to have my hair down. Limonada de coco, a refreshing blend of fresh lime juice, coconut milk, sugar, ice and a good blender, was the perfect remedy for the overwhelming heat. Searching for air-conditioning and wifi for a quick break before taking a city tour, we stopped into Sierva Maria for this smoothie to wash down the greasy street food we had picked up along the way. 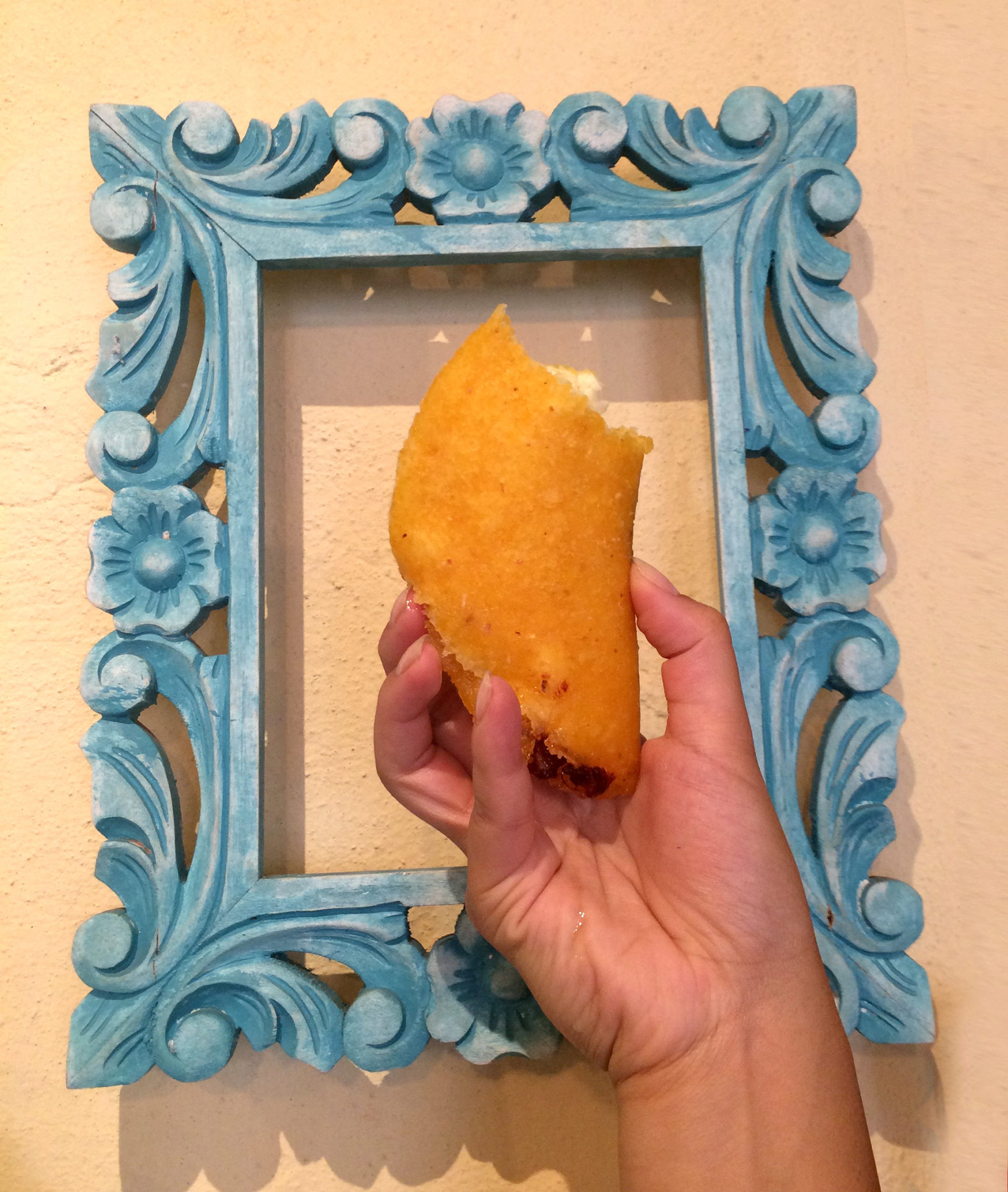 Like arepas, empanadas can be found at the majority of vendors in Cartagena and is the ultimate Colombian street food, tempting you with their flakey dough. They are typical Latin American pastries with a variety of savoury fillings like beef, chicken, pork, and cheese. Not all empanadas are made equal though so take the extra time to peruse the many stalls selling this snack. 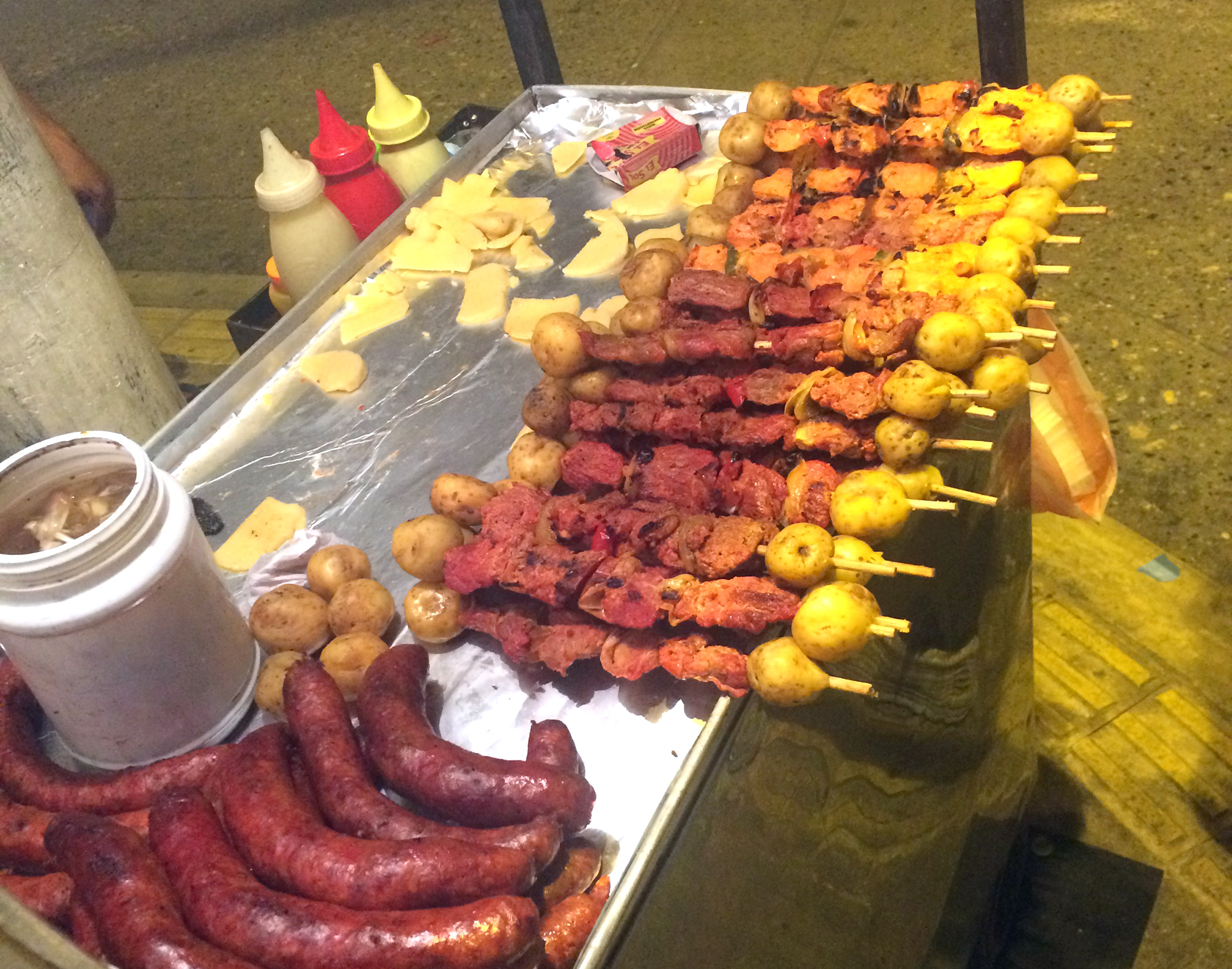 While I explored the Getsemani neighbourhood, I followed the heavenly aroma of grilled meat, potatoes, peppers and onions to a vendor located in Plaza de la Trinidad. In the midst of the lively chatter, the wooden skewers of meat that had been marinated in a mixture of cumin, cilantro, garlic, onions, salt, pepper, and olive oil were roasting on a grill. Could be devoured alone or with an arepa and a splash of fresh lime or dipped in mayo or ketchup. 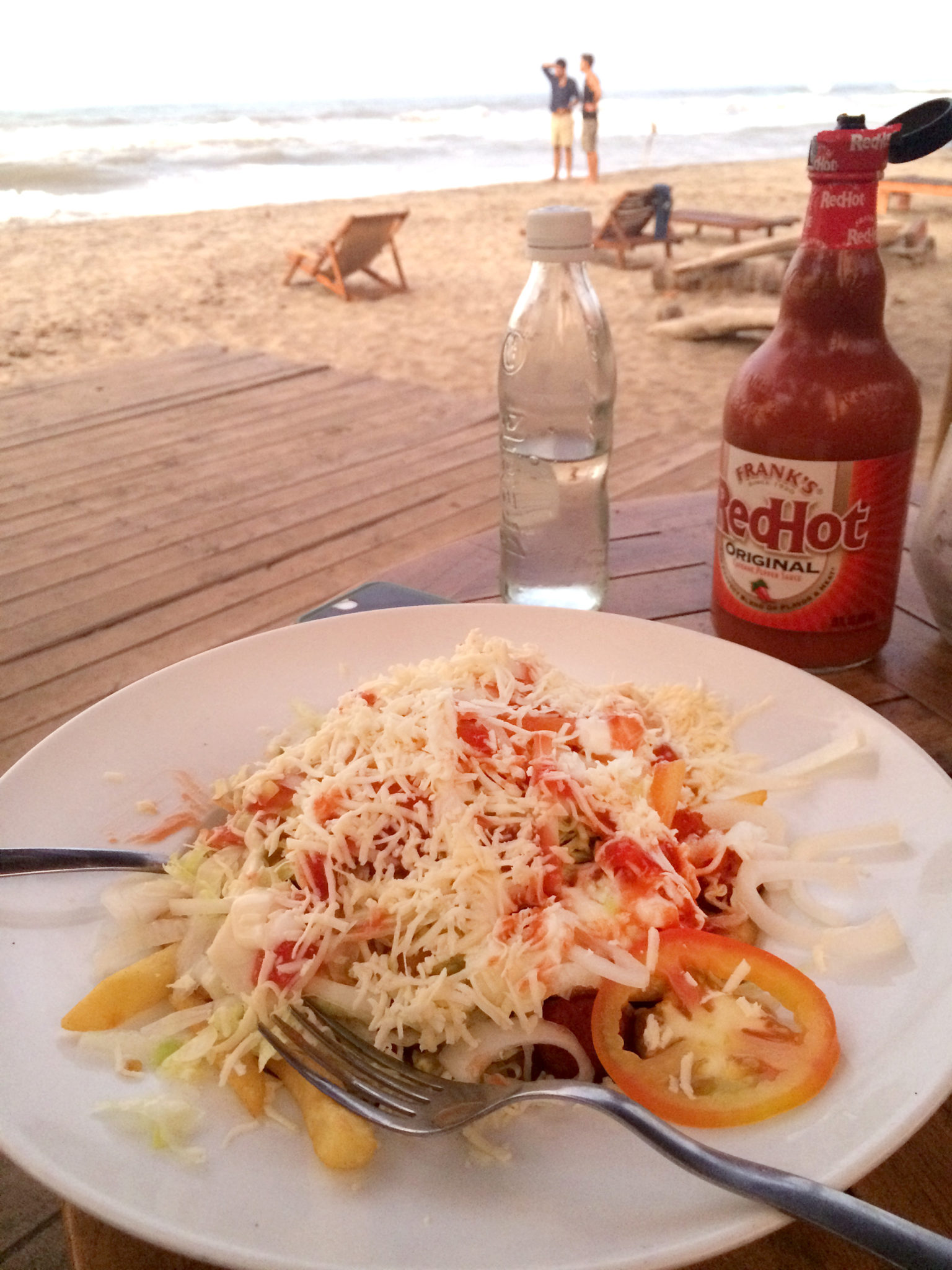 I became absolutely obsessed with the Latin American version of poutine or “Colombian Nachos”. Despite the unfortunate lack of gravy, salchi papas has it’s own charms because who doesn’t like thinly sliced sausage on a pile of fries?!

I would devour plate after plate, oceanside at La Brisa Tranquila in Santa Marta that came covered in shredded lettuce, sliced tomatoes, cheese, mayo, and ketchup. I would add to the masterpiece by dousing it in Frank’s Red Hot sauce. Just thinking about it makes me salivate! 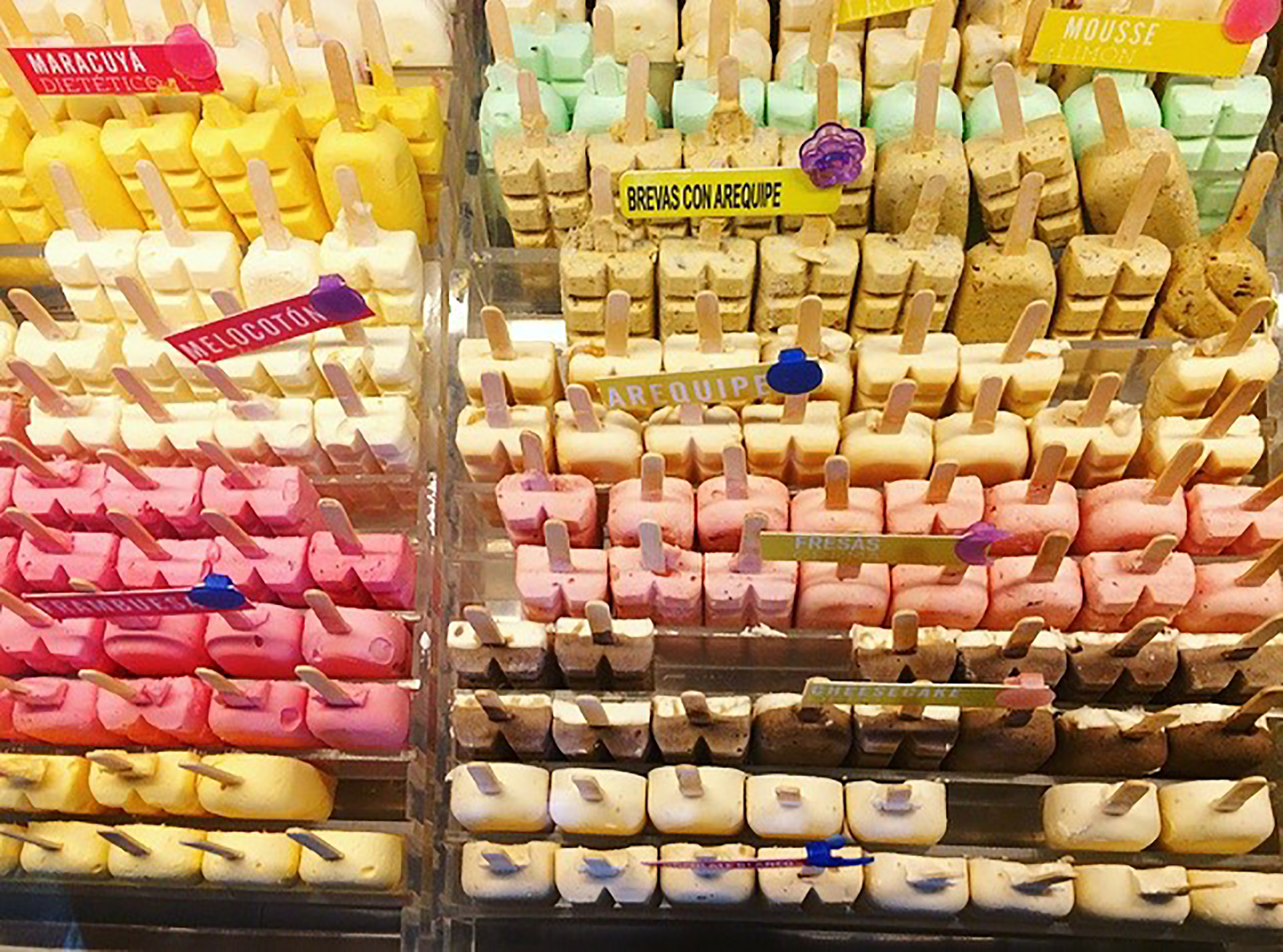 Paletas are Mexican “ice pops” or popsicles traditionally made of fresh chopped fruit and juice. I mentioned in this post the paleteria that I practically lived at in Tulum so I was painfully excited to discover that they were popular in Cartagena as well. In my usual, gluttonous fashion, I visited La Paletteria in Cartagena’s Centro Historica district 3 times (average of 2 paletas per visit).

Perfect for the city’s scorching temperatures, their paletas range in flavours from native Colombian fruits like maracuya and mango biche (unripe mango) to a banana split paleta, dipped in chocolate! They’re open from 11am – 11pm which gives you plenty of time to pre-dinner there then catch REAL dinner at the nearby Maria Restaurante and take a leisurely 5 minute stroll back for dessert. It’s a super refreshing Colombian street food to satisfy your sweet tooth. 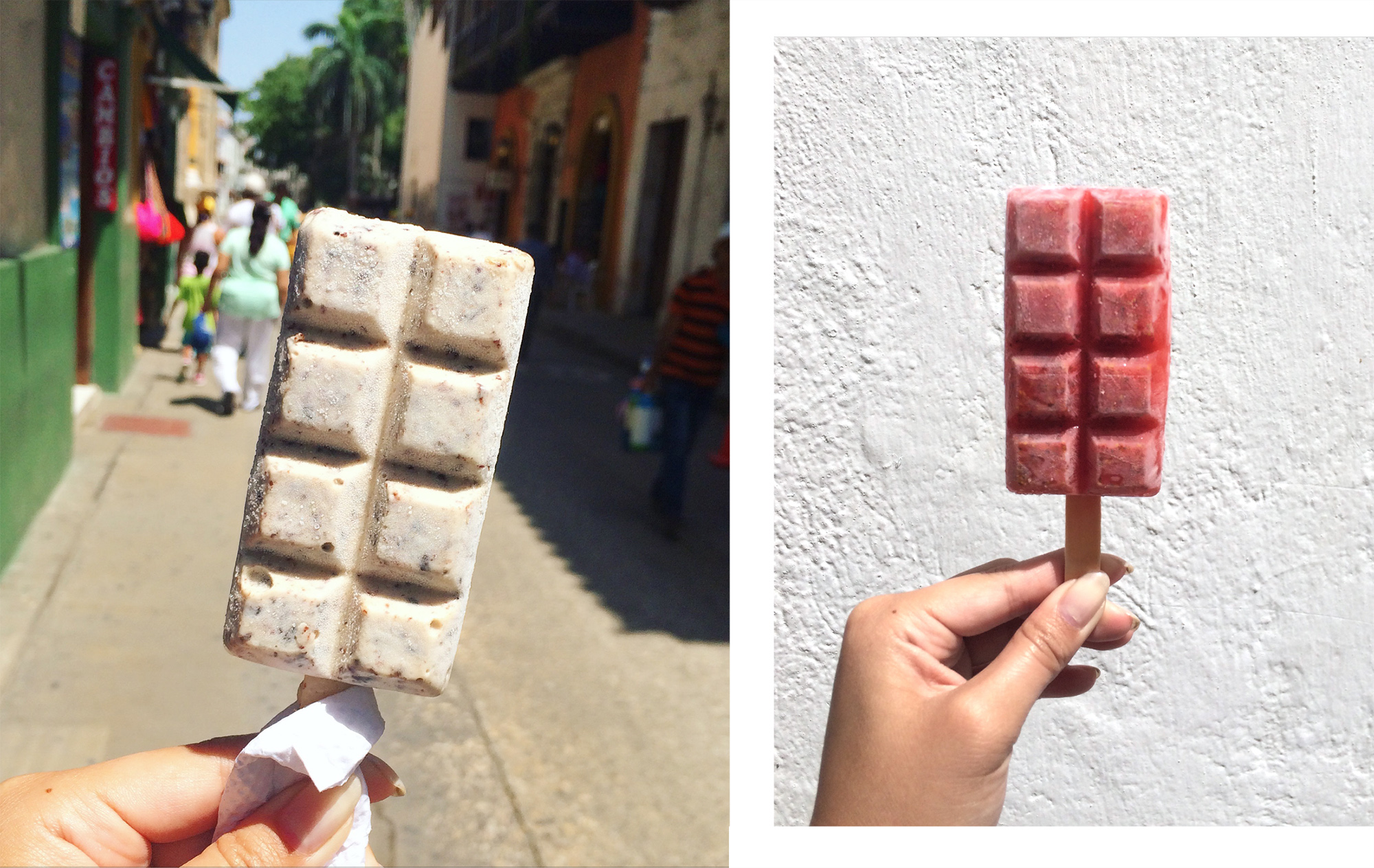 What can I say? I travel to eat. How could I not when the cuisine in Colombia — high-end to street food — is so delicious albeit mostly deep fried?

If you’re looking for more drool-worthy spots and dishes in Cartagena to add to your list, check this post out. 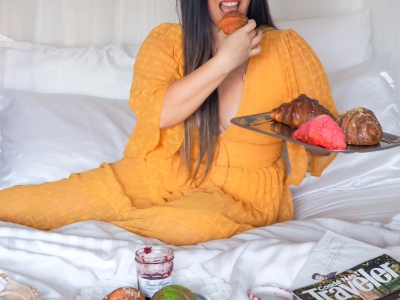 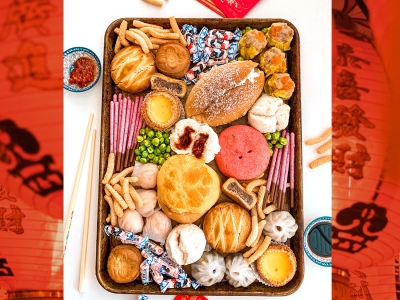 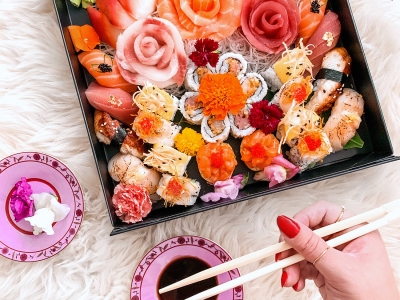