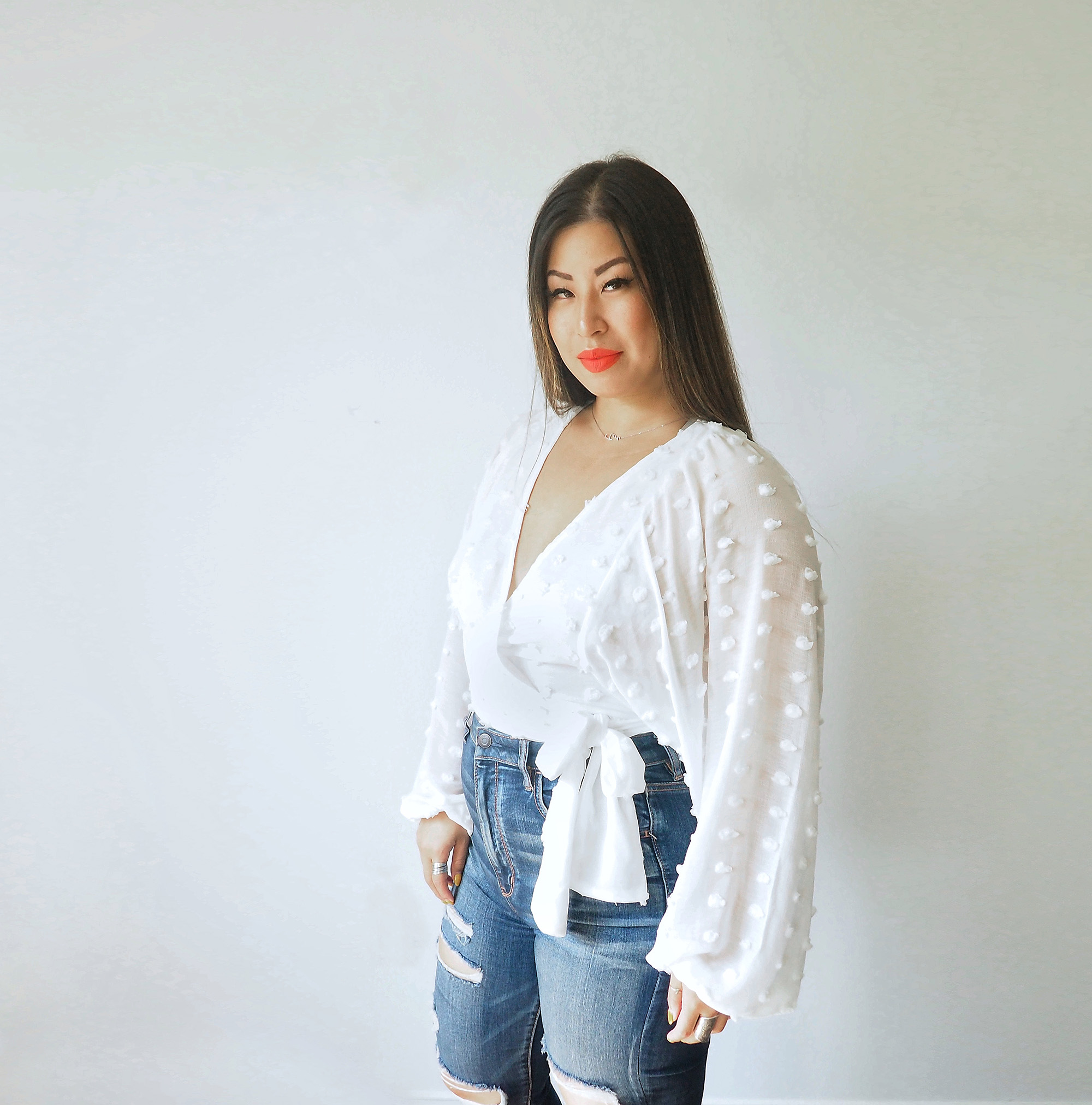 Every once in a while I’m prone to random bouts of optimism and download a dating app. A quick couple swipe-lefts later, I inevitably receive a message from a stranger along the lines of “WE’D MAKE THE CUTEST BABIES!!!” 🙄

Woah buddy. I mean, yeah, we probably would but let’s press pause and determine that you’re not a serial killer first.

While their opening line may not be the most culturally sensitive or “woke,” it doesn’t offend me as a Canadian-born Chinese woman. Obviously he’s referring to our potential future offspring being half Asian and half…whatever he is… and I understand that there is no malice intended in that assumption (for the most part).

But let’s not get it twisted – intentional or not, it’s still considered invisible racism and it is damaging. It may seem harmless but over time the cumulative effects of these unchecked comments can take a toll.

Whether we’re aware of it or not, we internalize invisible racism and carry it with us in our day-to-day lives.

I was was reminded of just how much it affects how I view dating while I was watching The Bachelor with my roommate.* After the last** Asian female contestant, Tammy, was eliminated she said  something akin to the bachelor wanting a “blonde trophy wife” and that wasn’t her.

*Don’t judge me.
**There were only 3 total to begin with

While most podcasts gave her flack for that parting shot, Rachel Lindsay – infamous for being the only POC lead the franchise has had in its long (and unvaried) history – had a different take on it. On the Bachelor Happy Hour, she posited that Tammy, having grown up in a predominantly-white town, probably spent her life surrounded by and comparing herself to people that looked nothing like her.

Oof! That observation pierced right through my heart. It resonated with me on such a deep level that I could almost hear the deafening gong as it reverberated through my bones. How many times have I spotted a cute guy and preemptively decided that he’d probably prefer the blonde standing next to me?

Enough times that it didn’t even consciously register that I had internalized the false belief that I was “less than” because of my ethnicity.

And I’m not alone in feeling some kind of way about my ethnicity in the context of dating.

➳ What ‘Crazy Rich Asians’ Means To Me, A Canadian-Born Chinese
➳ 7 Negative Mindsets To Dump About Being Single
➳ 6 Ways You Can Be More Kind To Yourself This Valentine’s Day

In honour of Valentine’s Day, I asked 5 successful, talented and thoughtful women to share their thoughts on dating from the Asian woman’s perspective:

Do you ever feel pressured to date someone Asian?

Not as much to feeling any outside pressure, but I’ve come to be more understanding of what my parents meant when they told me I should be with someone Chinese. I understand this especially more so now that I’m older.

Dating someone who comes from a similar cultural background just makes it so much easier to understand each other. They get all the little nuances that comes with being Asian, and share the same values such as the importance of family or having a good work ethic. You can appreciate and share all the little (but not so little) things like holidays, food, language, etc. In traditional Chinese culture specifically, you refer to your spouse’s parents as “Mom” and “Dad” just as you would your own parents. The 2 families are seen as gaining a daughter or son, so the ties are extremely close.
(Cherry Wang, 32, Fashion Stylist)

How do you feel that your ethnic background has affected how you approach dating?

I think, in the past, when I wasn’t comfortable with my ethnic background, I tended to prefer Caucasian men because I, myself, wanted to be white. However, dating Caucasian men came with its challenges — a lot of the times they didn’t understand certain cultural customs or values and it felt as though there was some sort of disconnect there. I often felt uncomfortable around their families, especially if I was the only non-white person at the dinner table. Then there was the issue of wondering whether or not these guys had “yellow fever,” which, unfortunately, a lot of them did. It felt gross to be the object of a man’s attraction simply because of my race.

Currently, my partner is Filipino and even though a lot of his family’s customs are different from my family’s customs, there is still a sort of understanding that we share, being POC and having faced similar challenges with identity, especially since we both grew up in a predominately-white town.
(Madelyn Chung, 30, Freelance Writer)

What preconceptions have men made about you as an Asian woman?

Oh man! All the classics – good at math, computers. I think men also expect you not to be assertive.

The worst part is the effect that this has on you as a woman, when you start realizing you’re feeling a pressure to live up to some stereotypes to make a date successful

– that really bothered me. Because where do you go from there? Are you being yourself if you try all the time not to live up to a stereotype? You really can’t return to being yourself after being a victim of this kind of stereotyping.
(Anonymous, 34, Game Artist)

How do you think your ethnicity has affected you on dating apps/online dating?

Growing up in downtown Toronto, I feel as though I am lucky in a way – guys are used to seeing Asian girls around and I don’t get too many remarks on dating apps.

Many guys will ask about my background. They will ask if I’ve dated outside of my race (I think that’s more of a concern for men dating Asian girls than the actual act of dating an Asian girl). I’ve recently had an encounter with a guy online asking if I’ve dating black guys and that clearly made him uncomfortable when I said I had.

The weirdest thing a guy has said to me regarding my ethnicity? Just the typical “I bet that kitty is tight”, “I love how tiny you are I could throw you around”, nothing I can remember that stands out too much, lol. I feel like dating as an Asian girl in Downtown Toronto is win!
(Anonymous, 31, Fitness Trainer)

Have you ever felt fetishized for your ethnicity?

In a word, yes. And often by strangers walking by. I’ve had older white men walking by exclaim, “That is classic Chinese,” whatever that means. In terms of dating, I find it almost impossible for men to stop trying to demonstrate their knowledge of everything Asian as soon as you sit down for a first date – usually mixing every Asian nationality up with every other almost incomprehensibly. That said, I guess it’s good to have an edge. And my husband is a white guy.
(Anonymous, 34, Game Artist)

What differences do you notice (if any) between dating someone Asian vs. Caucasian?

The biggest differences have been centred around culture and being able to connect over childhood experiences growing up in an Asian, immigrant household.

I think as we get older we appreciate our upbringing more and I think it’s very comfortable to be with someone who grew up similarly. You don’t have to explain trivial things like why shoes come off at home or big things like why sometimes we’re not as emotionally communicative.

That being said, sometimes it can be too comfortable and you’re not able to have as many moments where you’re teaching each other about unique cultural customs. Things like celebrating a new holiday (or the same holiday differently, ex. Christmas in a Canadian-Vietnamese home vs. Canadian-Italian home), trying traditional foods, travelling to their home country where they can walk you through every new experience can be really special in a relationship. It’s also important to have different perspectives in life to facilitate healthy debates in terms of growth but also for conflict resolution.

And to be honest, having immigrant parents makes it easier for them to connect with a partner who is also Asian. Of course they’re always equally lovely to everyone but if you had to ask them who they’re more comfortable with, it’d be the Asian guy.
(Nhi Tran, 29, Freelance Designer)

Do you feel like people judge you for who you date, whether they’re Asian or otherwise?

I’ve definitely been judged for dating guys who are NOT Asian. For the most part I think there’s still this stigma you’re expected to date someone from the same race. I’ve gotten stared down by random strangers while out with my ex who is black. Some asshole is always going to have an opinion no matter what – If you date someone outside your race you’re either a white worshipper or you only like black guys for some superficial reason. If you prefer to date only within your own race then you’re racist. Honestly who gives a shit, be with the person who makes you the most happy!
(Cherry Wang, 32, Fashion Stylist)

The point of this post is not to assign blame or whistle blow on anyone. The hope is that by sharing stories from a different perspective will help to dispel damaging stereotypes. The added benefit for me has been that knowing that these amazing Asian women have had experiences and feelings similar to my own makes me feel less alone.

A heartfelt thanks to Deanna Ip, Cherry Wang, Madelyn Chung, Nhi Tran and Anonymous for permitting me to share their personal stories and thoughts in this forum.