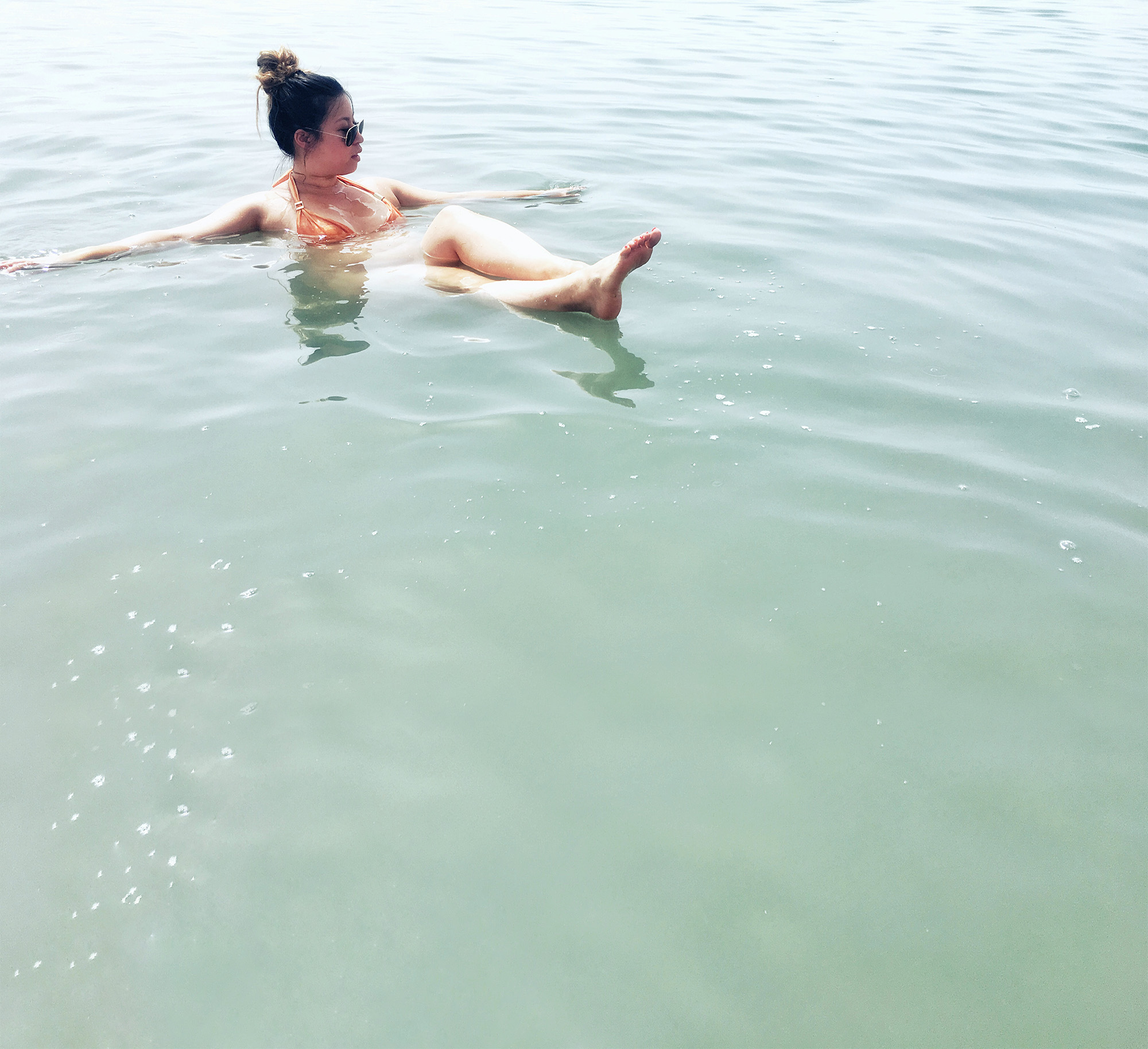 “The Dead Sea” sounds like an ominous location in a horror movie that I’d be too much of a weenie to watch. An army of the undead would emerge from the water, dragging their rotting corpses on to shore to drag the living into its dark depths. Dundunduuunnnn!!! … Great, now I’ve given myself a mild phobia of large bodies of water. I have a very robust imagination and an overdeveloped fight-or-flight instinct.

But real talk, there’s nothing scary about the Dead Sea, unless you have a fear of eczema-ridden Russians, capitalizing on the health benefits of the mineral-rich mud and the salty waters. 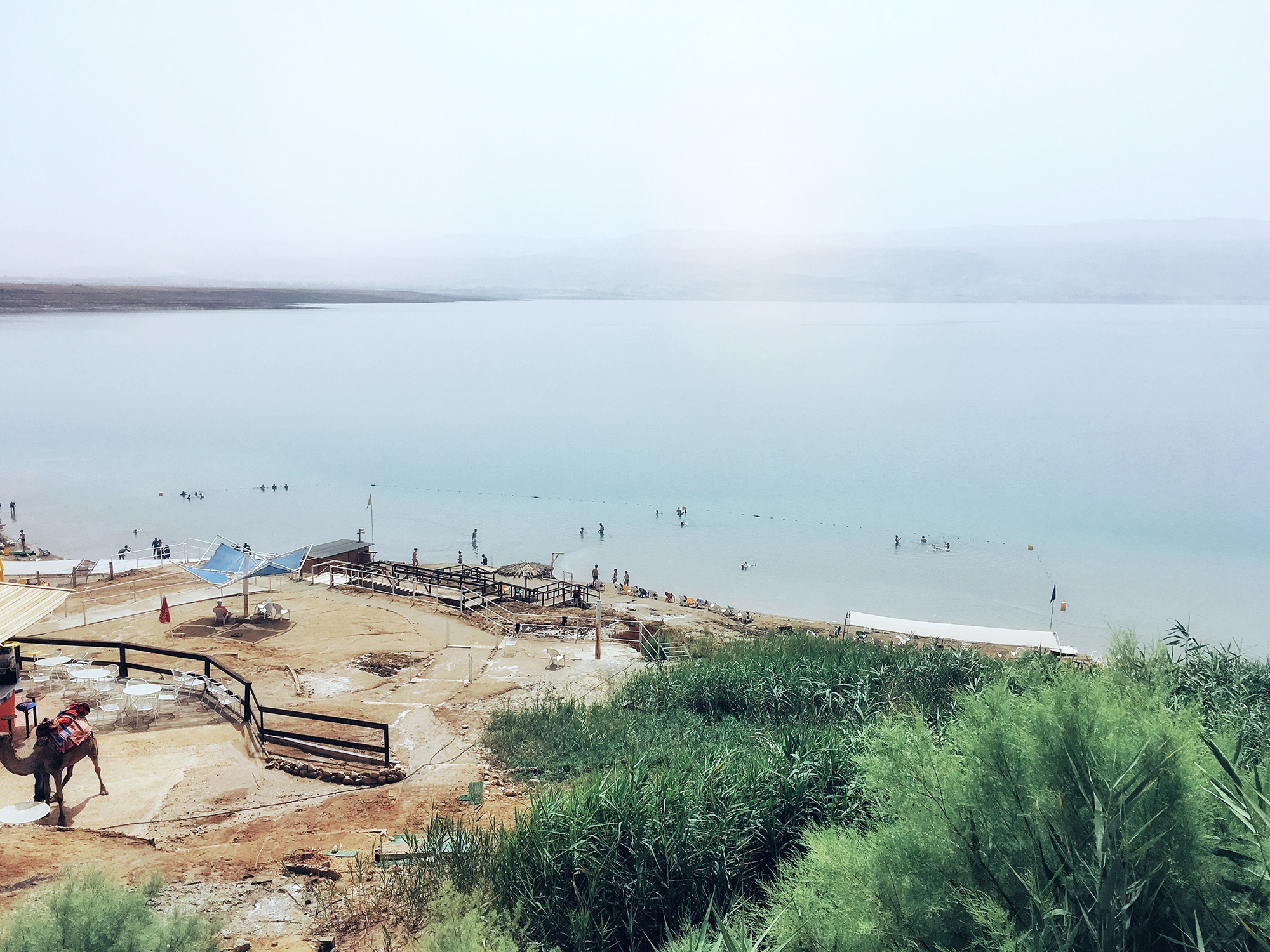 Even if you don’t know how to swim, you can leave your water aversions behind, along with your inflatable purple unicorn/golden pineapple/pizza slice/gothic swan! There’s no use for them at the Dead Sea (or really outside of an Instagram feed) and I’ll explain why: 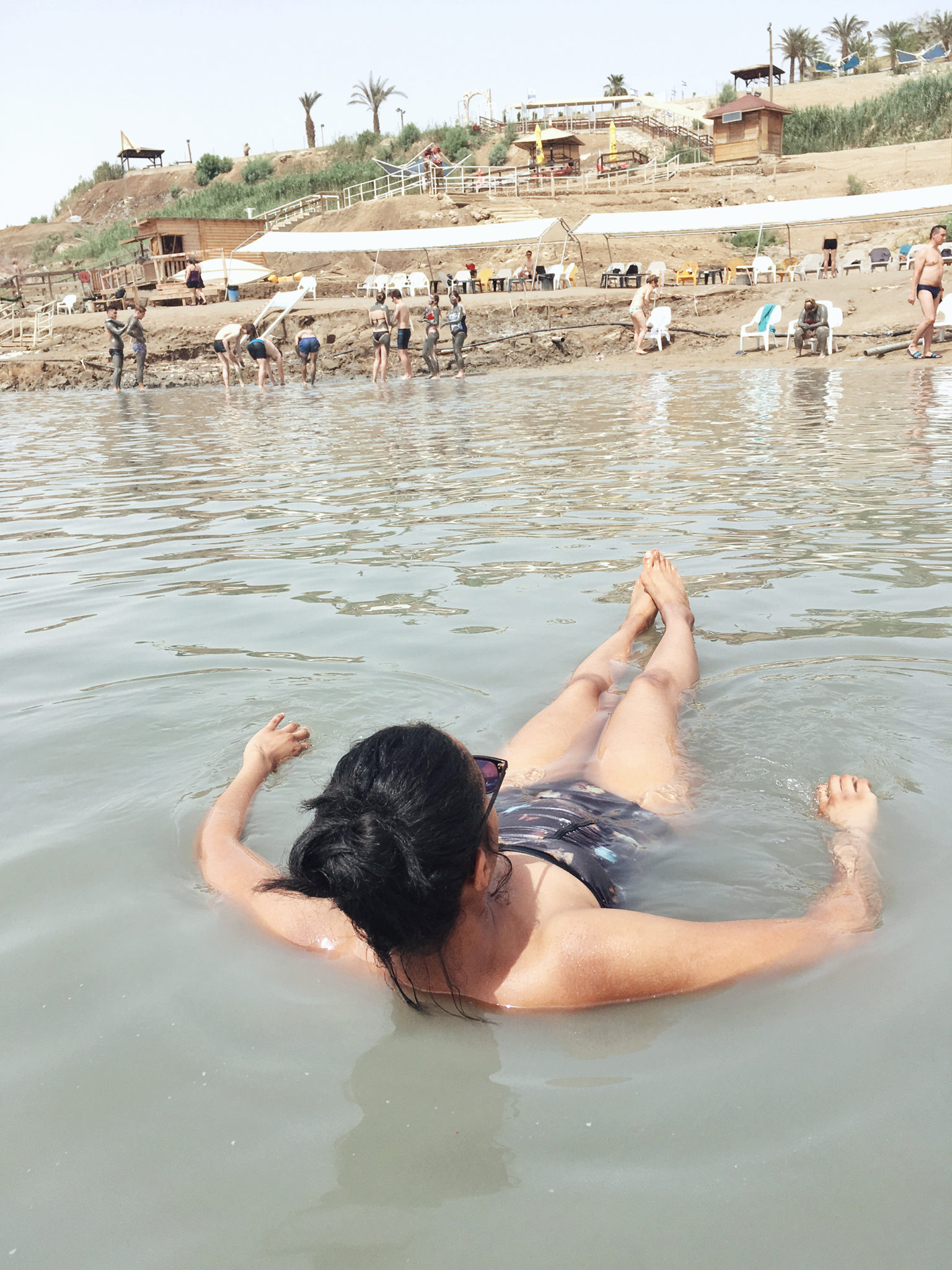 The Hebrew name for the Dead Sea – Yam Ha-Melakh – means the Sea of Salt, but is more accurately categorized as a land-locked lake that is part of the long border between Israel and Jordan. The name derives from the fact that as it is the highest salinity and lowest body of water on the surface of Earth, it’s impossible for fish or other water critters to flourish in it. The salt makes the water more dense than the human body which is what allows you to float.

That same salinity that also lends healing properties to the water and mud, making it King Herod’s spa of choice in biblical times, and continues to have people flocking to from all over the world. 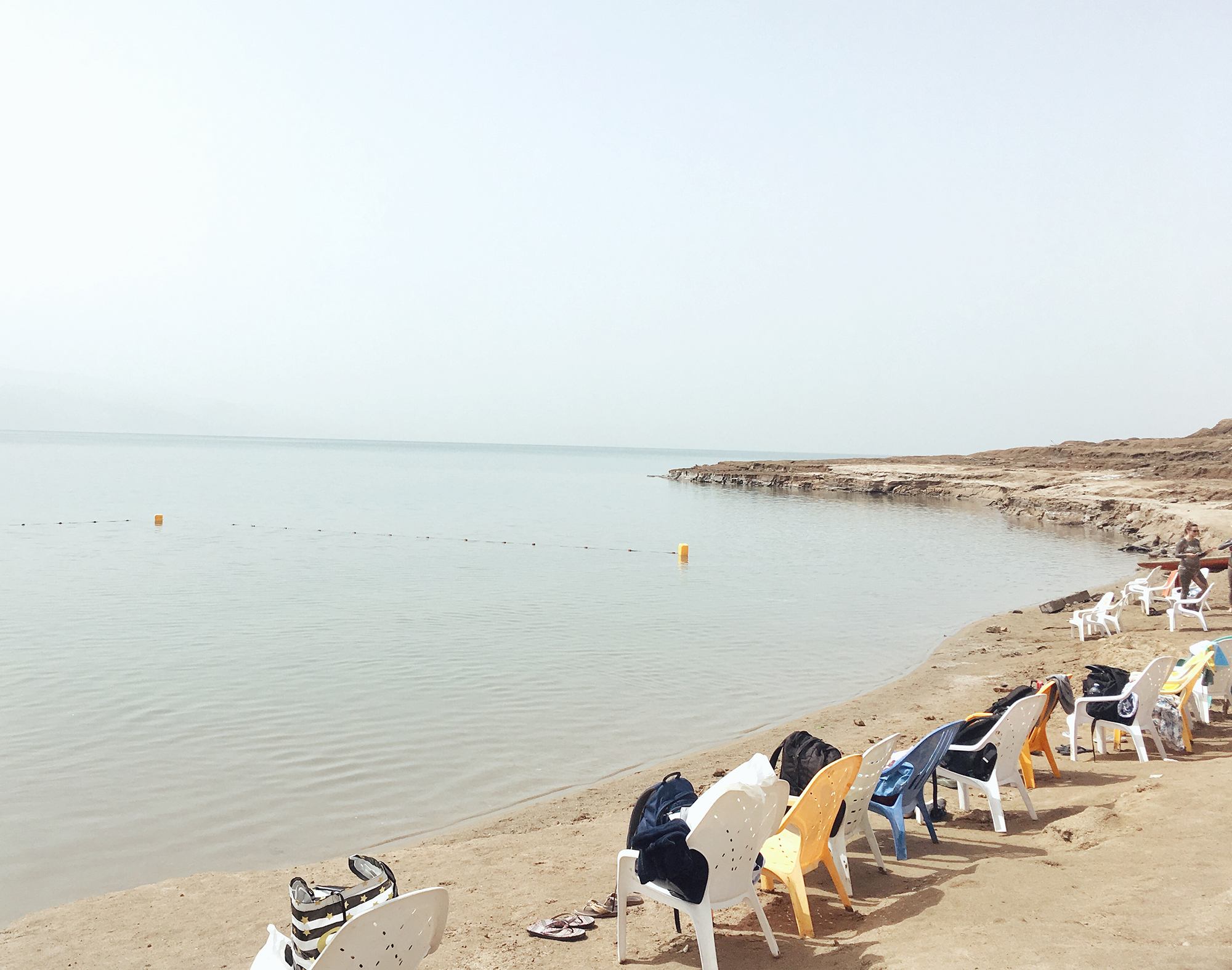 HOW TO GET THERE

Sandwich a trip to the Dead Sea in between stays in Tel Aviv and Jerusalem (It’s two hours from Tel Aviv and one from Jerusalem) and arrange to be picked up in one city and dropped off in another. We did is as part of the self-guided Sunrise Masada trip with Tourist Israel so it was the last stop after the Masada Fortress and Ein Gedi. Check out my curated itinerary for how I scheduled the trip in. 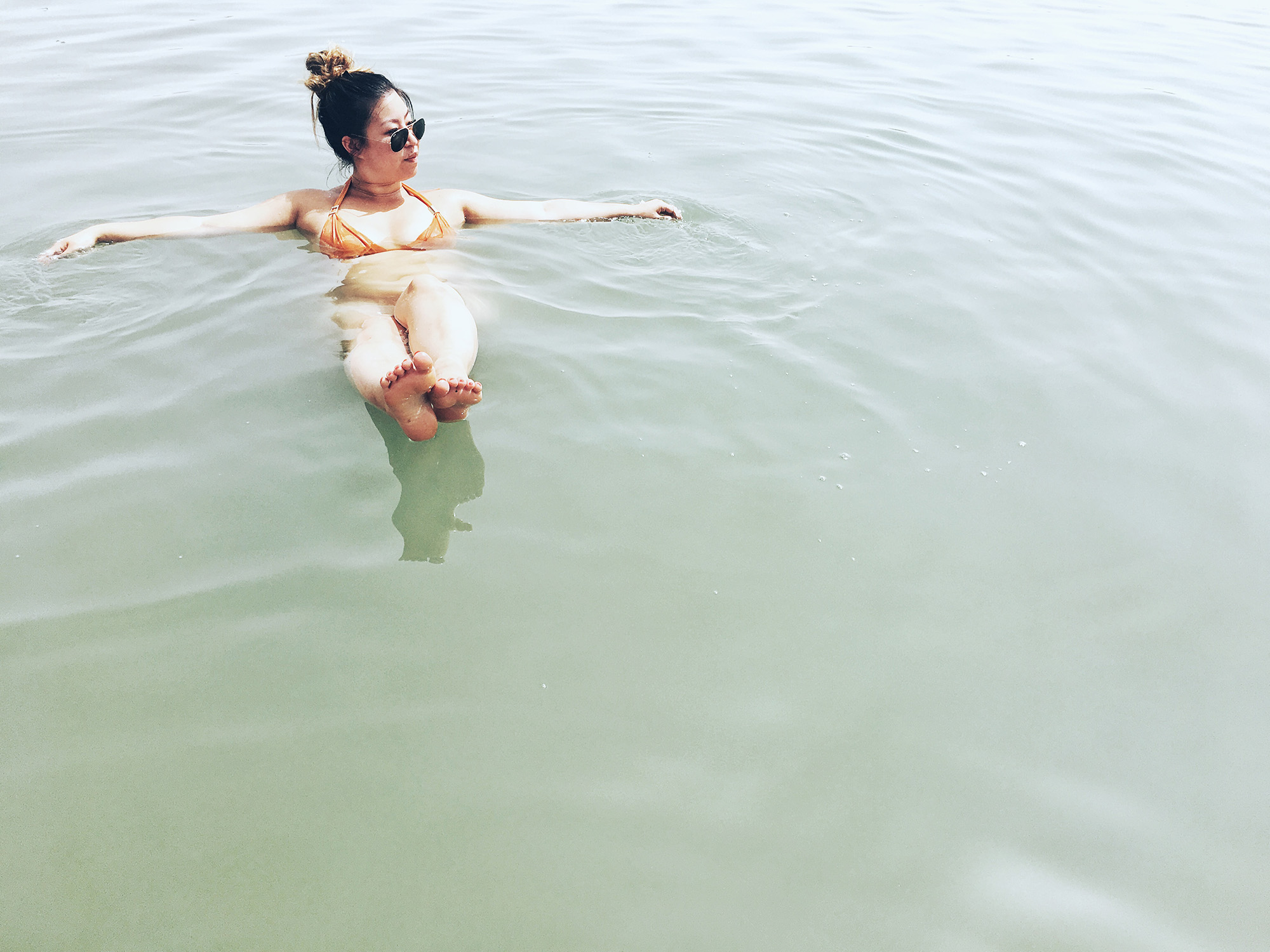 As I trudged down to the beach in the scorching, 47-degree heat, I spotted a group of muscular guys, ankle-deep in the water, slathering mud on a tiny Asian chick with the mountains of Jordan looming impressively in the background.

Thank goodness that was as x-rated as it got.

The photos floating around the internet of idyllic turquoise waters is some kind of fabricated Photoshop wizardry because it was certainly not representative of the drab and unkempt Dead Sea I visited. I didn’t mind though as the cool factor of floating effortlessly in the high density waters far outweighed the underwhelming aesthetics. 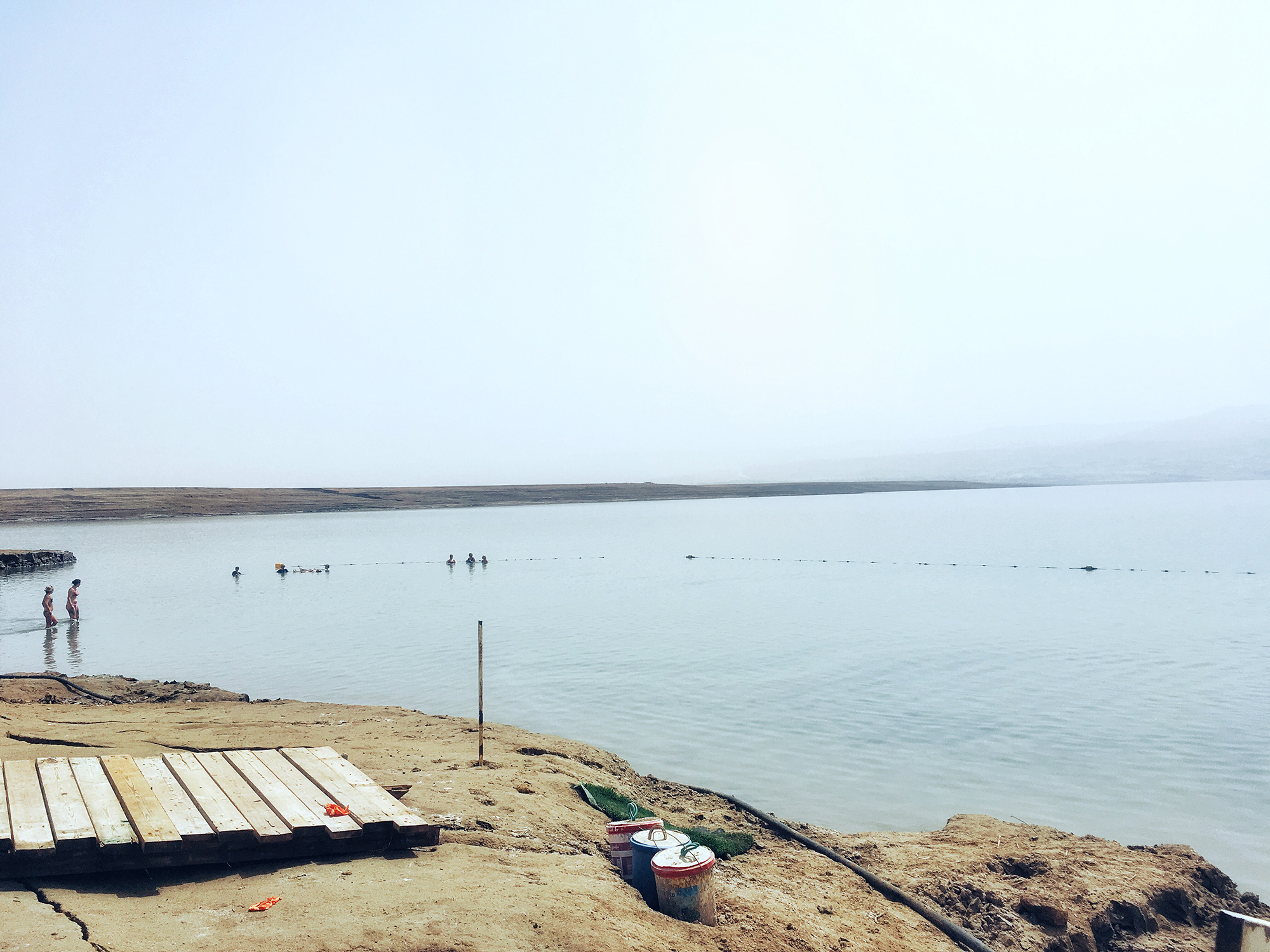 Even though I knew what was supposed to happen, as I waded into the silky waters at waist-level, my heart still leapt in surprise as I leaned back and my body weightlessly bobbed up like a cork. A surreal, bucket-list-worthy experience, providing a new opportunity to exclaim “Look ma, no hands!” 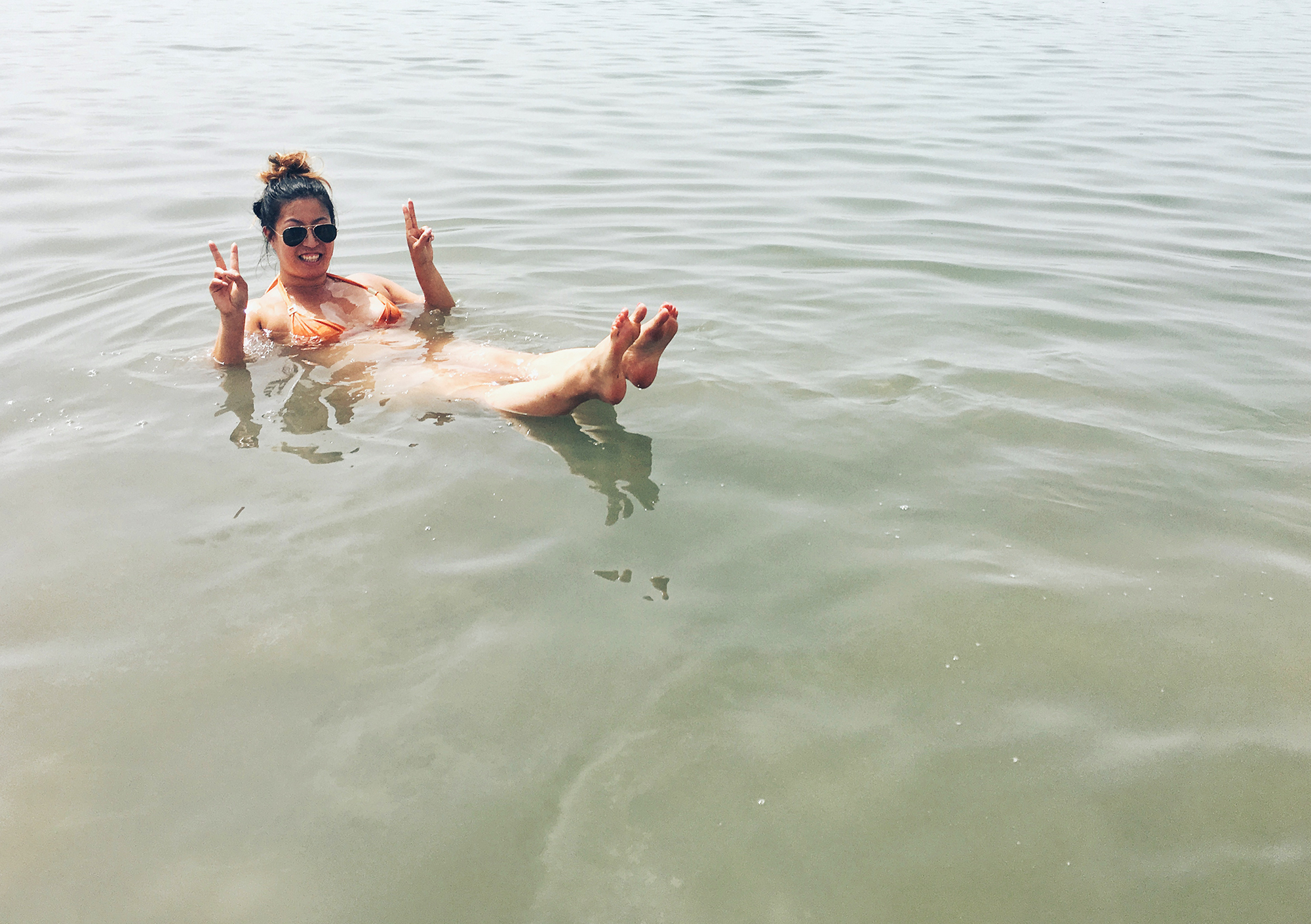 For the optimal experience at the Dead Sea, here are some tips to take note of before your visit:

THE RIGHT TO BEAR HAIR

Hairless anomaly that I am, I completely missed out on the bonding ritual of commiserating over the necessity of leg shaving. If you DO have to shave, do so two days prior to going to the Dead Sea or it will burn! Wrap cuts up tight or you’ll find out where the saying “rubbing salt in the wound” comes from – it will be the most pain you’ve ever felt.

TAKE PHOTOS BEFORE GOING IN

Of course you want photographic proof that you are capable of floating on water, so either take them before going for a dip or avoid getting the GoPros wet. The water has a unique texture – almost silky and oily – which leaves a cloudy film on the lens, ruining what you think will be IG-worthy floating shots. 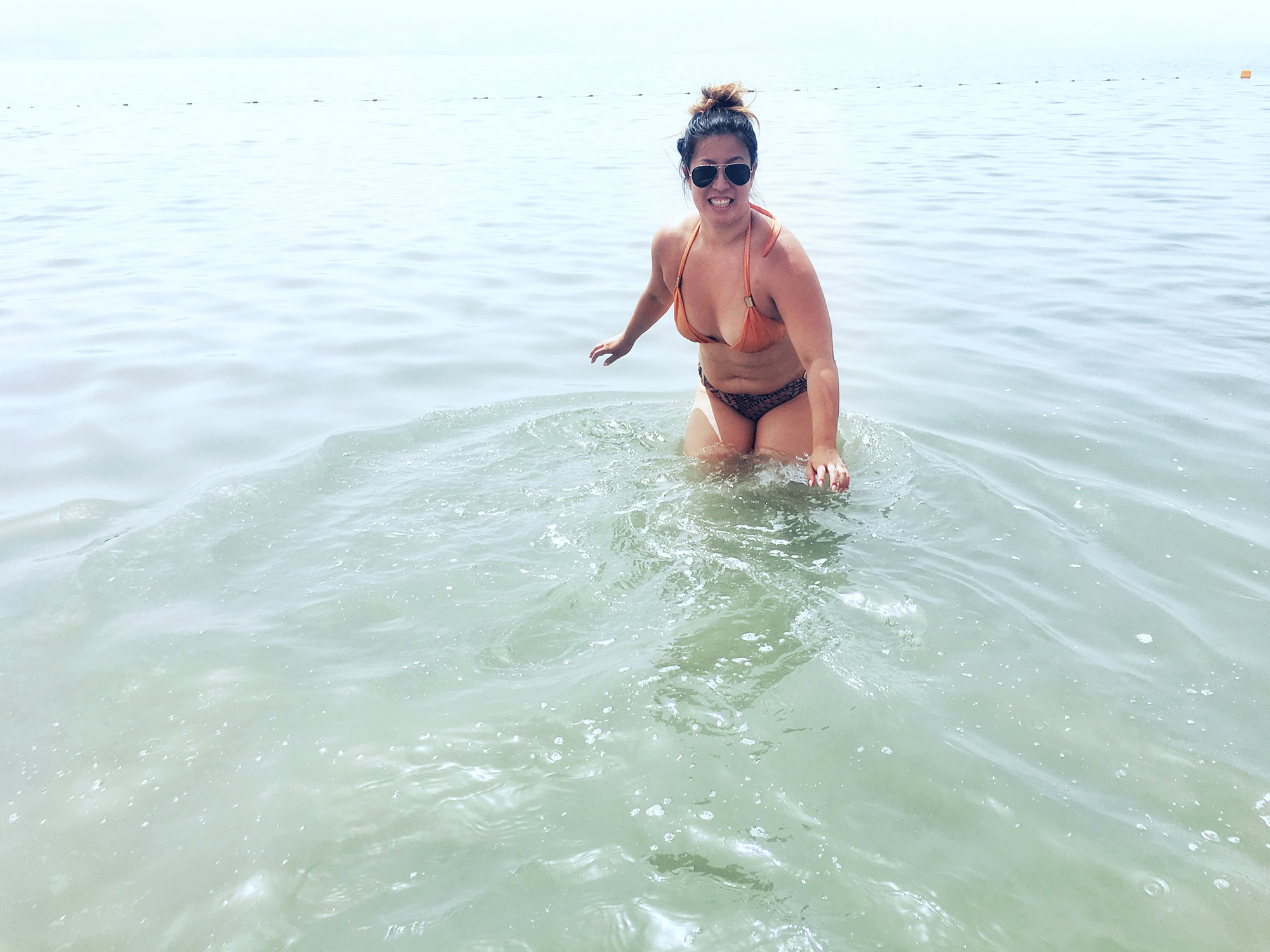 DO YOU EVEN SQUAT, BRO?

As much as I believe cannonballs are the only way to enter a body of water, it’s best to take the boring approach in this scenario. The recommended way to enter the Dead Sea is to slowly wade in to the shallow waters in from the shore and once you’re at waist-level, squat and lean back. Voila! You’re a floating pro.

Speaking of the most pain ever, also avoid getting into splashing wars because the water will make your eyes feel like they’re burning out of your skull. Too graphic?

This has just become a comprehensive list of all the places you shouldn’t get the Dead Sea water in….your mouth included. Imagine how disgusting accidentally swallowing ocean water is…but times 1,000,000.

The Dead Sea mud is the ultimate spa product, alleged to possess a multitude of health benefits from healing skin ailments and reducing cellulite and arthritic knee pain to preventing hair loss. Slather handfuls of it all over your body until your resemble a monster from the deep and you’ll feel silky smooth after! Avoid applying it above your eyes just to be extra cautious. 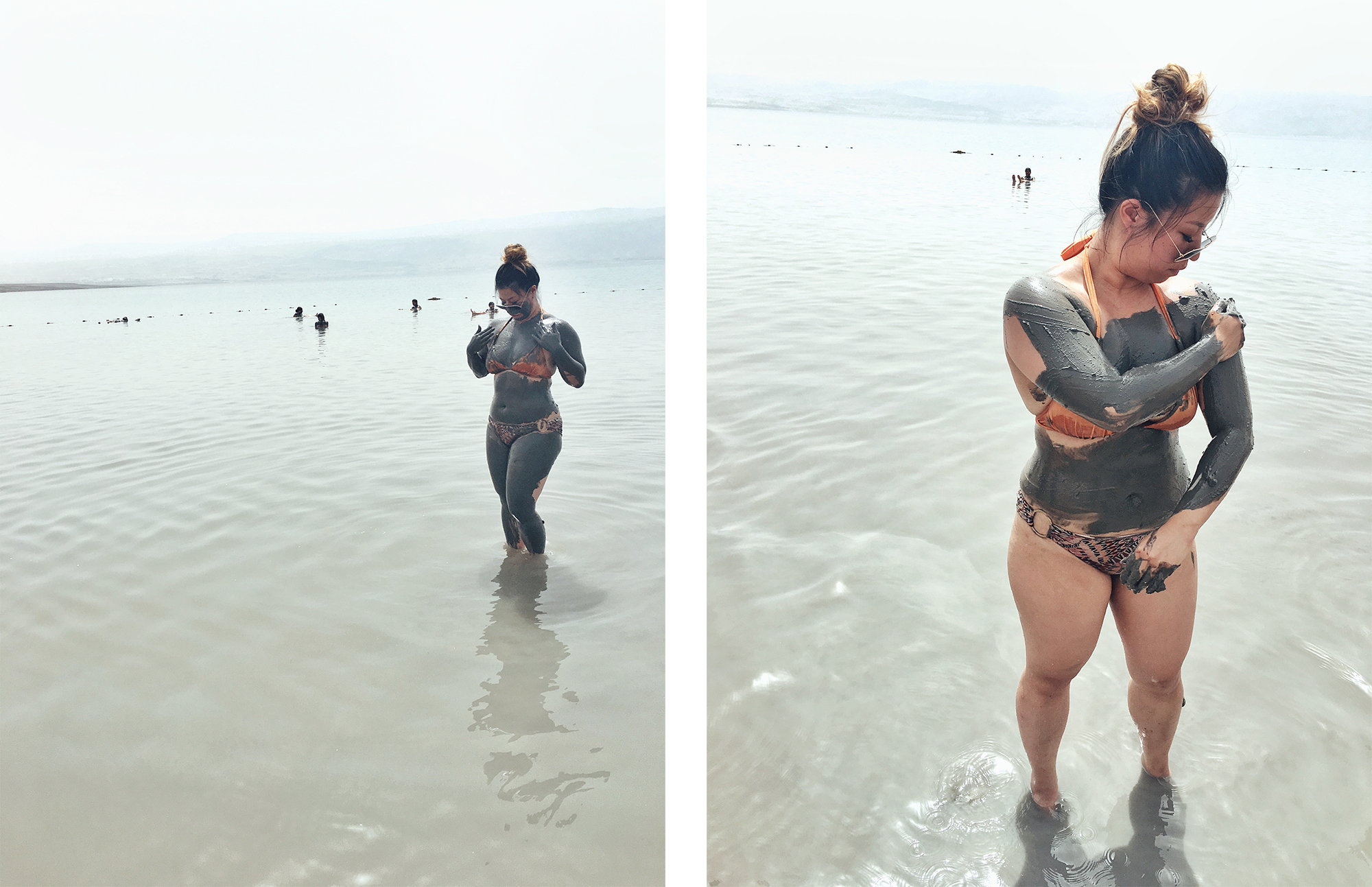 OLDIE BUT A GOODIE

Rinse off all the mud and salt water from your bathing suit at the nearby showers or risk having it discoloured. Just to be safe, wear an old bather for a dunk because the salt can potentially ruin your favourite bikini (I wore a two-piece so I could get mud on my torso as well).

Huge chunks of salt form on the floor of the Dead Sea so wear flip flops to protect your feet and move slowly.

Doing for the ‘gram? Bring props – like a book – for a good photo op to illustrate that you’re floating in the buoyant waters. 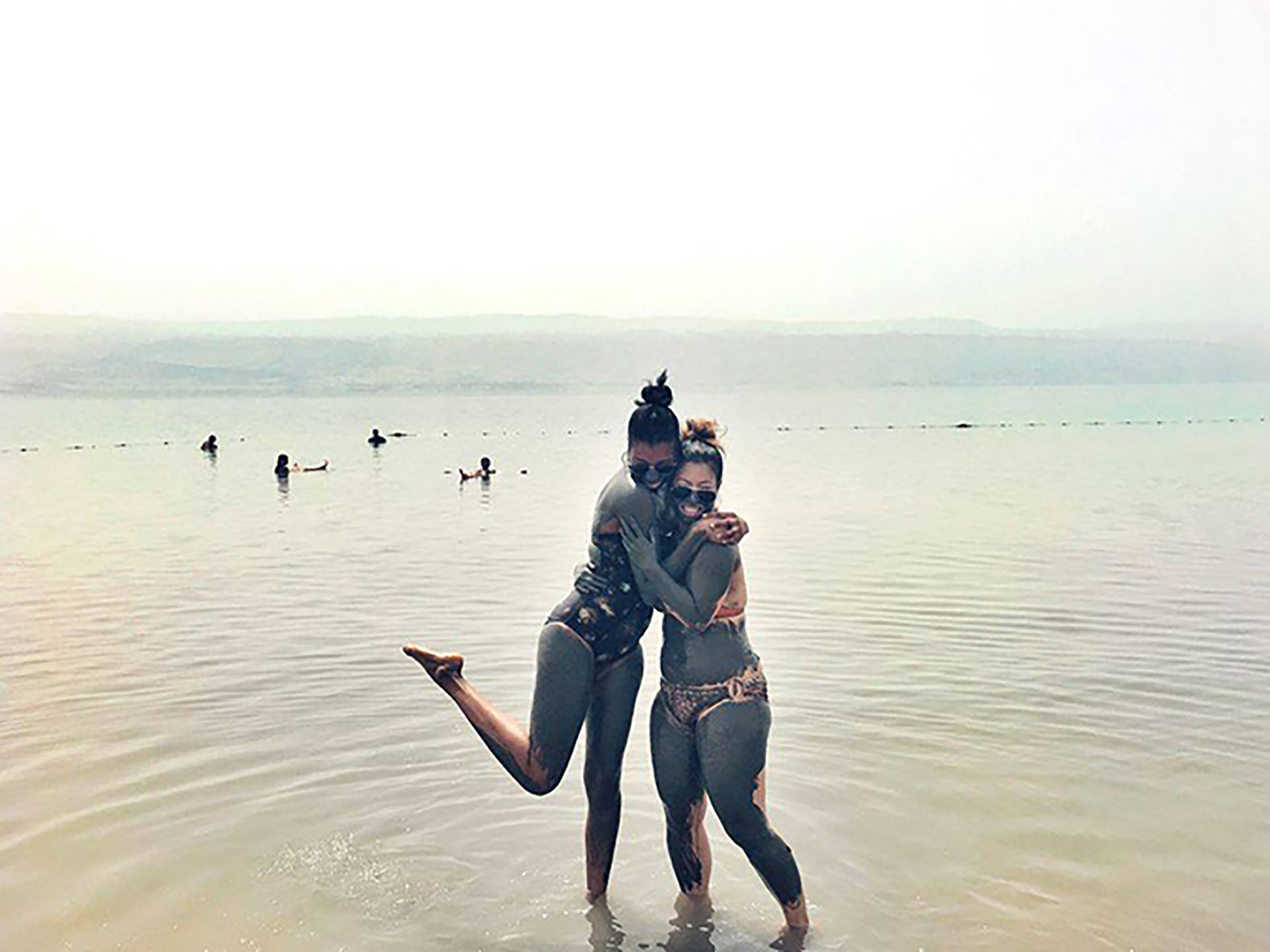 Floating in the Dead Sea is a wild experience. It’s surprising and you walk away with super soft skin although you’ll be finding sand in every crevice possible.

If you’re putting together your itinerary for an upcoming trip to Israel, check out this expertly curated one. 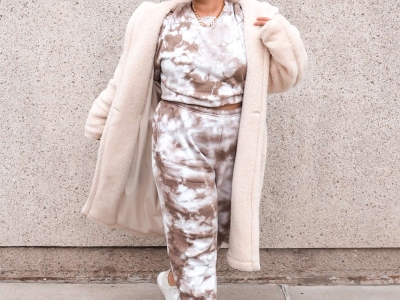 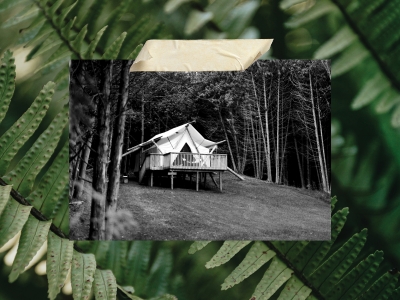