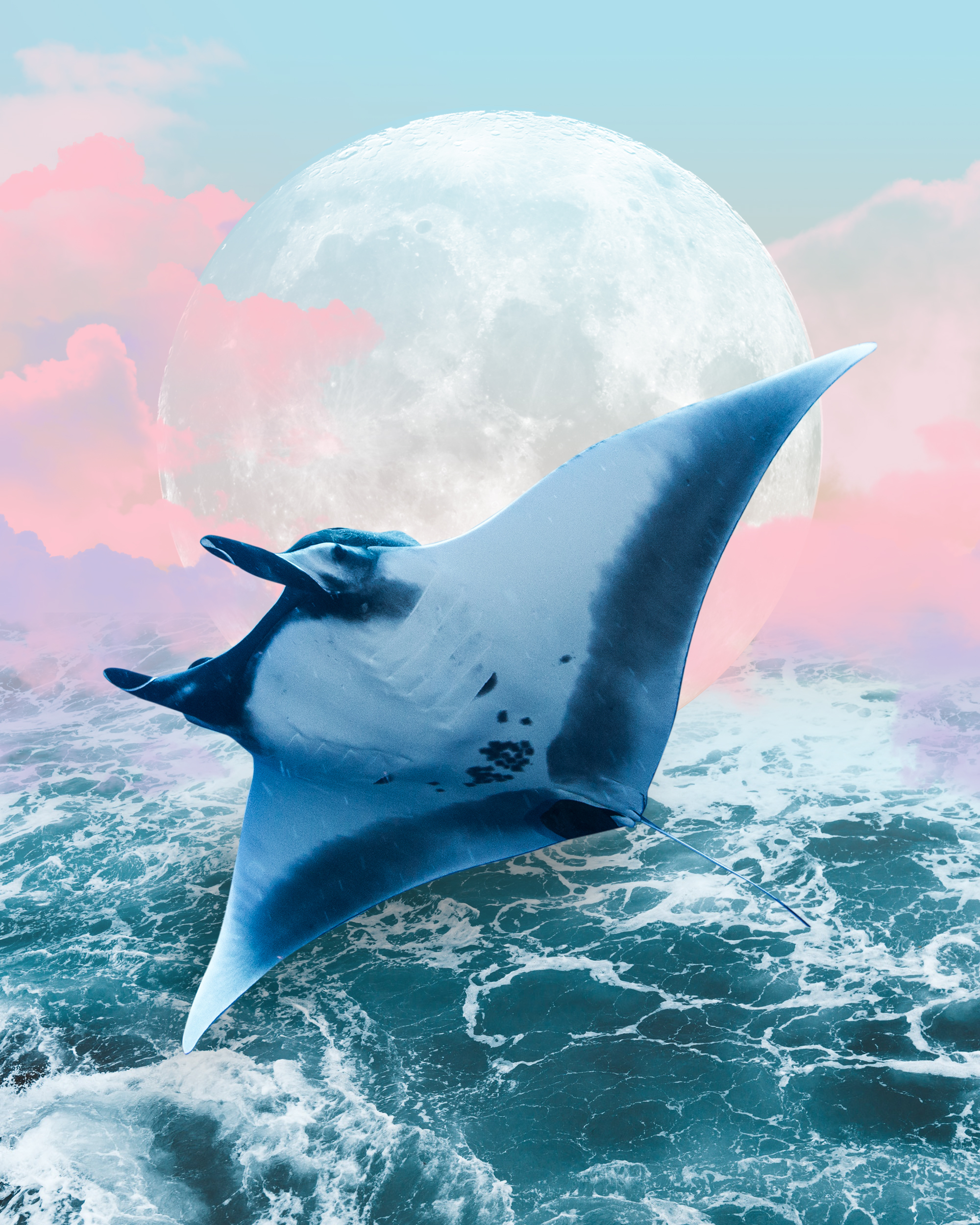 Does a night of snorkelling with manta rays in Hawaii sound magical or terrifying to you? Imagine, it’s pitch black and you’re in the middle of the ocean right at dinnertime for massive manta rays…plural!

Ok, when I put it that way it sounds like the plot of a horror movie set in Sea World, but it’s also a magical experience that you won’t want to miss out on. Trust me, I’m a huge weenie who gets scared at Disney movies so if I can handle it then I’m sure you can.

This year, I decided that I wanted to spend my birth week in the Aloha State, kicking it off on the Big Island. Other than very specific plans reserved for the actual day — sunset on a beach wearing a haku lei (flower crown) while eating my body weight in poke — snorkelling with manta rays in Hawaii was my only other priority for the trip. 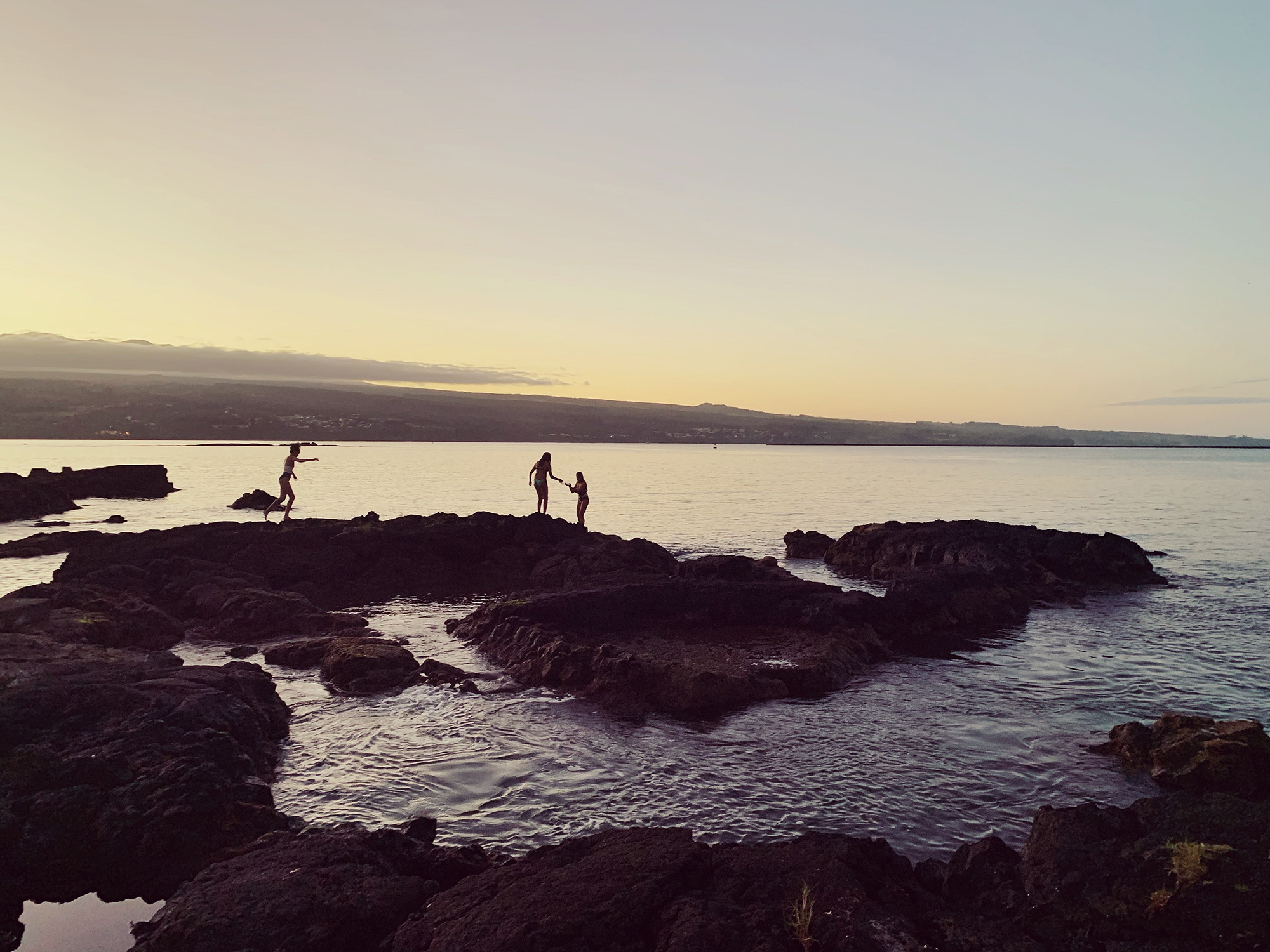 ➳ A Curated 10-Day Itinerary of Hawaii
➳ The Fresh AF Salad From Hawaii That You’ll Be Making On Repeat
➳ What It’s Like To Float In The Dead Sea (and Essential Tips!)

Origins of snorkelling with manta rays in Hawaii

On the West Coast of the Big Island in the early 1970s, the Kona Surf Hotel (now the Sheraton Keauhou Bay Resort & Spa) turned on bright floodlights on the surrounding surf zone so guests could appreciate the view of the crashing waves.

One night while guests were enjoying a nightcap from the public viewing decks, they noticed gigantic manta rays gracefully navigating the illuminated waters. Unintentionally, the lights had caused plankton to concentrate near the shoreline that in turn attracted the manta rays who devour these microscopic marine life by the pound. Over time, manta rays began to associate light with a favourable feeding area.

Now dubbed as “Manta Village” (officially known as Kaukalaelae Point), it’s the most popular site frequented by tours for snorkelling with manta rays in Hawaii while they’re busy gobbling their diet of plankton.

Which tour company should I go with?

I almost had an existential crisis trying to decide which tour company to go snorkelling with manta rays in Hawaii — there are so many! Whichever company you go with, confirm that they’re operating under the proper standards to protect the manta rays.

+ Big Island Divers ($115 + taxes and fees): Ultimately, I went with Big Island Divers based on a recommendation from a local. The crew and captain were hilarious, professional and experienced so I felt very safe…which is kind of important when you’re snorkelling with manta rays in Hawaii at night. Of course, you also had the option to dive (hence the name). Plus, the excursion was a good duration (4 hours) because you don’t want to feel rushed.

+Sea Paradise ($117 + taxes and fees): This tour operator was a serious contender with stellar reviews. The crew of Sea Paradise has a reputation of being attentive and informative and you set off for your moonlit sail on a spacious 45-foot trimaran. The length of the tour is approximately one and a half hours from departure time with about 45 minutes of snorkelling. 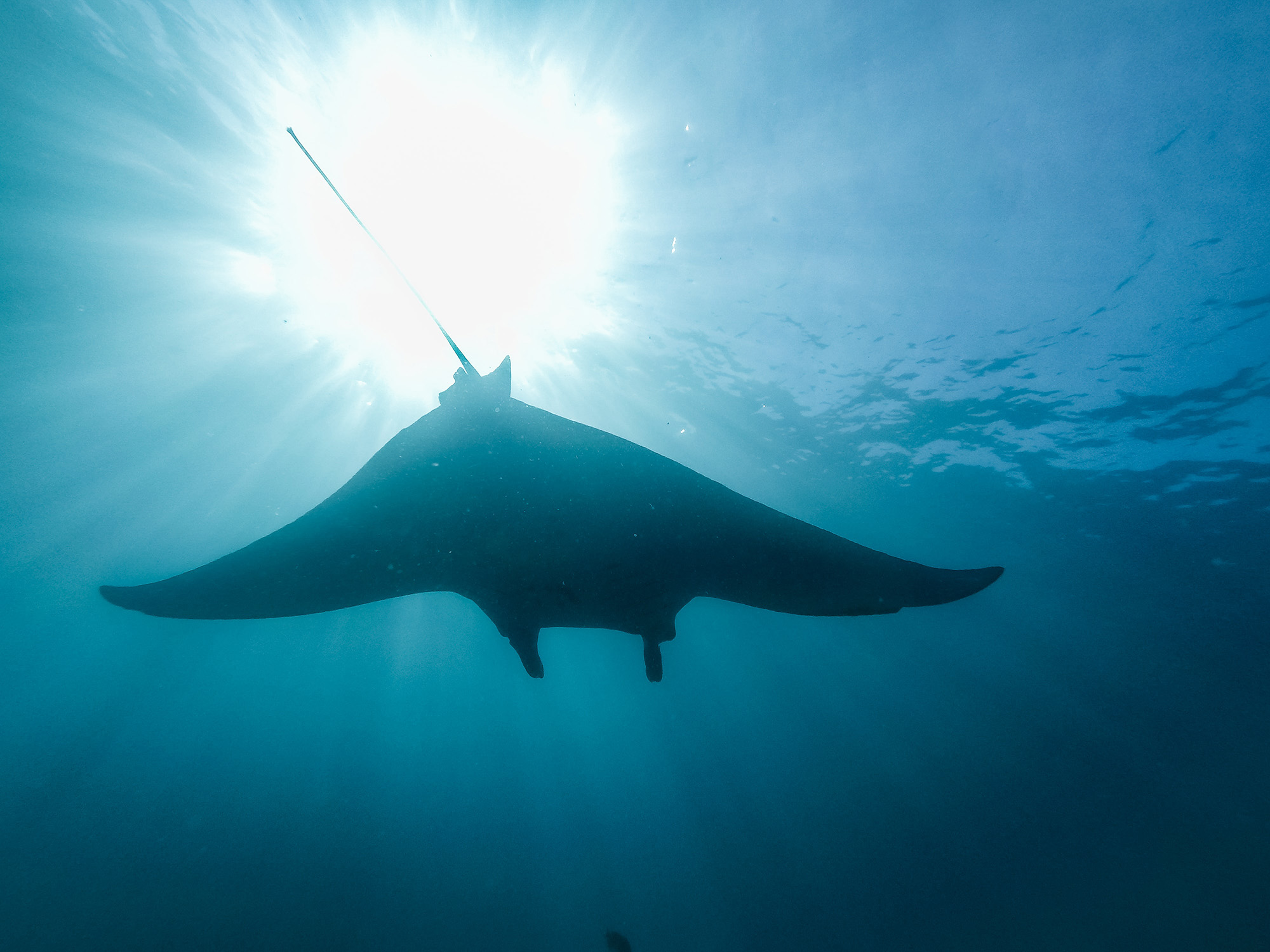 Snorkelling vs. Diving with manta rays

I personally haven’t gotten my scuba certification (yet) so I didn’t have a choice but if you do, the difference is where you are in the water vertically.

+Snorkelling: You view the manta rays from the surface, looking down and likely holding on to a floatation device with lights on the bottom to attract plankton.

+ Diving: If you opt to dive, you’ll be situated on the floor of the ocean, looking up as the manta rays as they leisurely glide around in search of their meal. 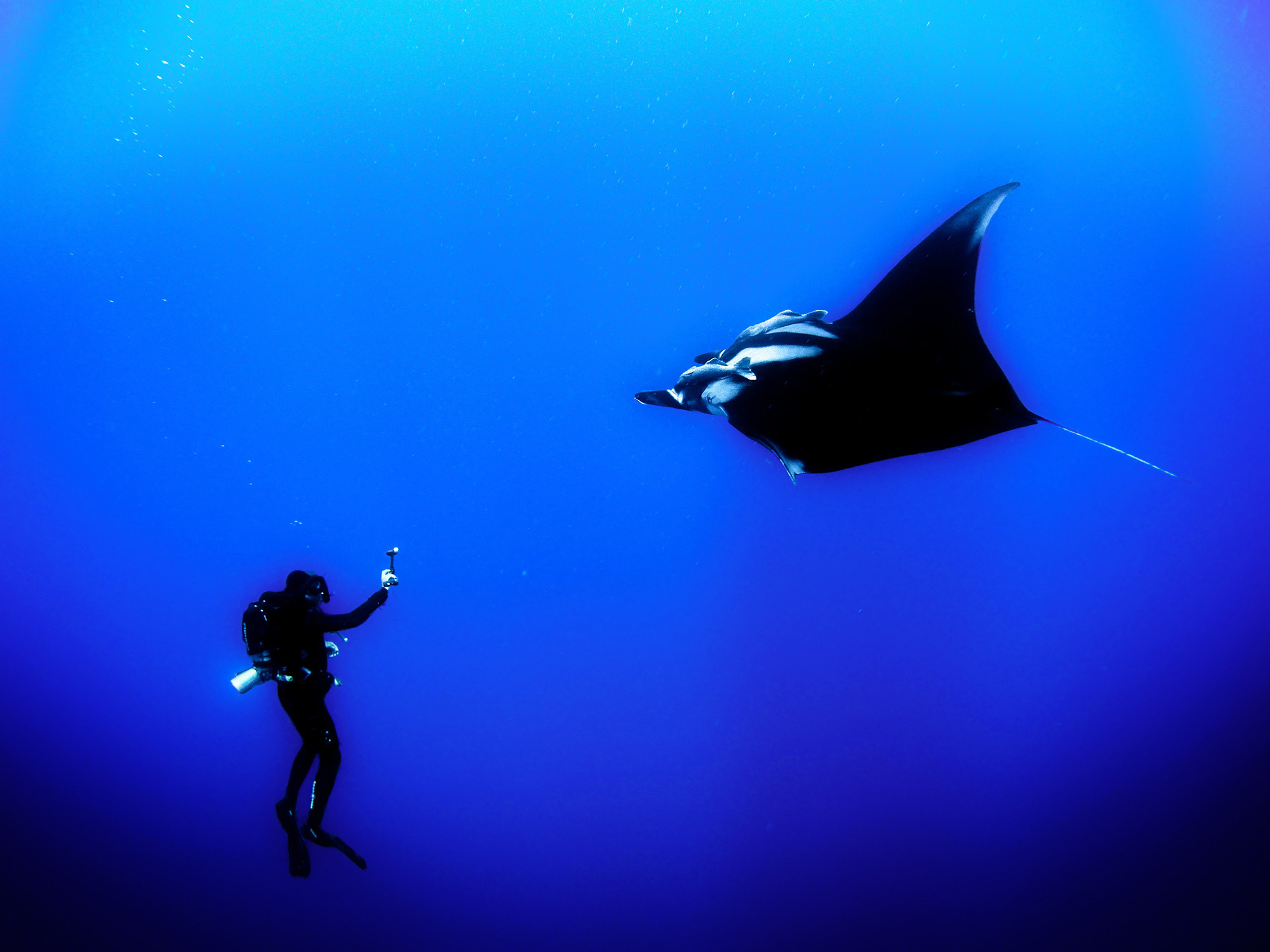 Tips for snorkelling with manta rays in Hawaii:

+ Plan ahead: If snorkelling with manta rays in Hawaii is high is a priority but you have a limited time on the Big Island, schedule the tour early on. Weather conditions aren’t always ideal and some nights the manta rays don’t show up. If you don’t see them, most tours offer guarantees that you can return on another night for free.

+ Make a day of it: Most of the tour check-in locations are near Kona. Since we were staying in Hilo (1.5 hour drive), we made the most of our time by exploring the Kona side of the Big Island. Tour the Greenwell Coffee Plantation or feast on poke at Umeke’s fish market bar and grill. For more ideas, check out this curated itinerary.

+ Seasickness: The waters are often choppy near the shoreline where the manta rays feed. Not only is there a boat ride but then you’re floating, facedown in the water for an extended duration. If anti-seasickness medication works for you then great! If not, you may want to sit this one out or prepare to grit your teeth and bear it.

+ Darkness: There are tour options to depart at sunset or night to consider. Sunset is magical — you get to see the skies awash in pastel hues — but the darker it is, the easier it is for the manta rays to find the plankton. Then again, I did the sunset tour and by time we arrived at Manta Village, it was just about dark enough to spot plenty of the majestic creatures.

+ Respect: Don’t pet the manta rays! It’ll rub off their protective mucus coating (doesn’t sound like a pleasant sensation for either parties anyways). If you’re using a GoPro, be considerate and don’t block other people’s view or accidentally touch the mantas. 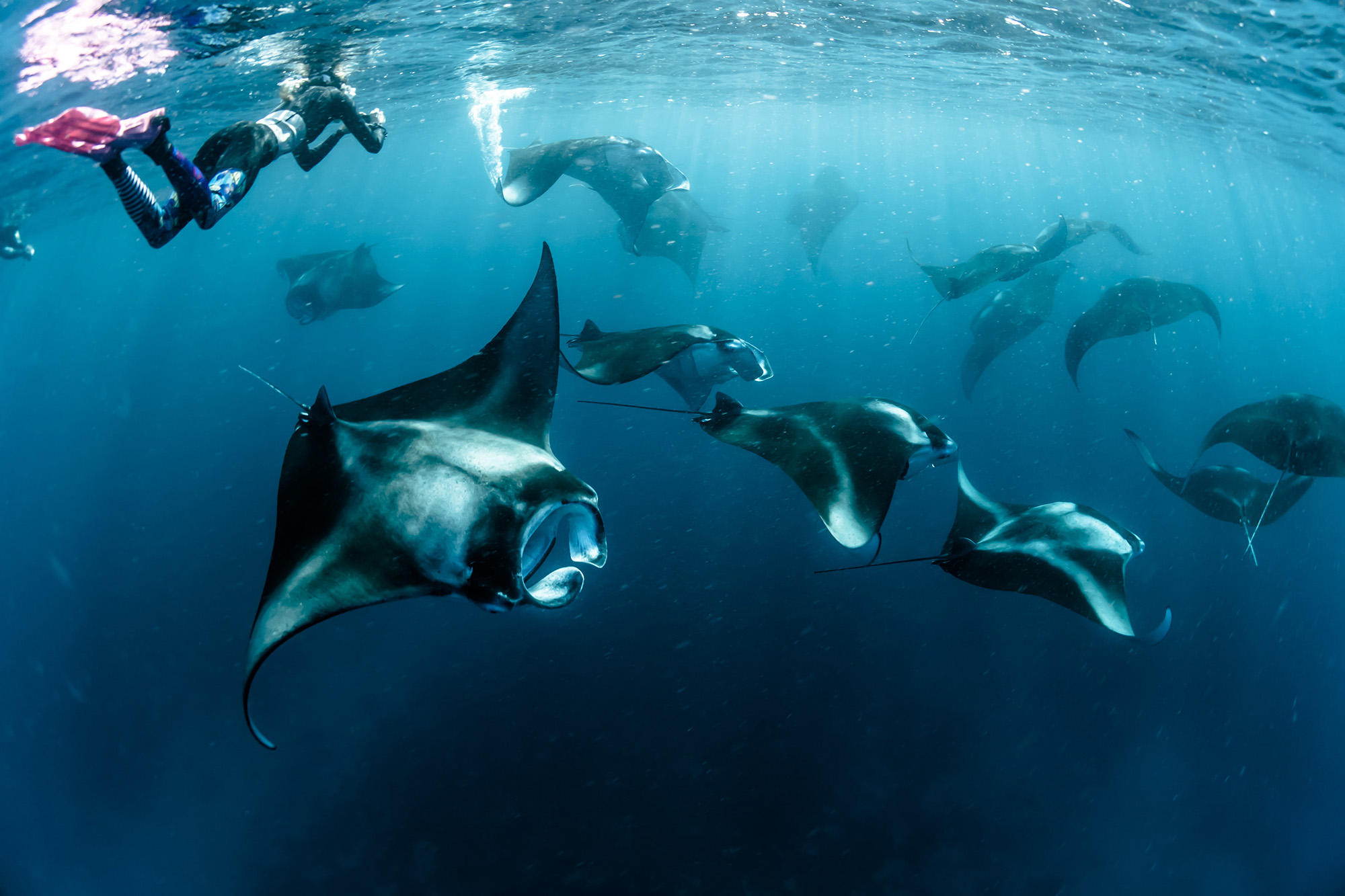 What was snorkelling with manta rays in Hawaii really like?

🎶Face down, snorkel up, that’s the way we like to—WWUUUUTTTT!! 🎶

….you can hear me right now but I’m laughing hysterically. That’s what happens when you only have you, yourself and you for company while writing blog posts during a lockdown.

But sanity (or lack thereof) aside, that revised would-be rap lyric is still an accurate description for what snorkelling with manta rays in Hawaii was like.

After driving from Hilo to the Big Island Divers dive shop in Kailua-Kona, we got measured for flippers and a general low-down of what to expect from snorkelling with manta rays in Hawaii from one of the knowledgable crew members.

We headed to the pier where we were further briefed on the dos and don’ts before boarding the boat at  sunset for 45-minute ride towards the West Coast of the island where the manta rays were accustomed to feeding.

By the time we arrived at Manta Village, it was almost dark but I could feel a low thrum of excitement buzzing in the sea salt air. The waters in front of the Sheraton were crowded with tour operators who had already taken up position and gotten their charges into the water, their dark heads bobbing amid a sea of illuminated floatation devices. 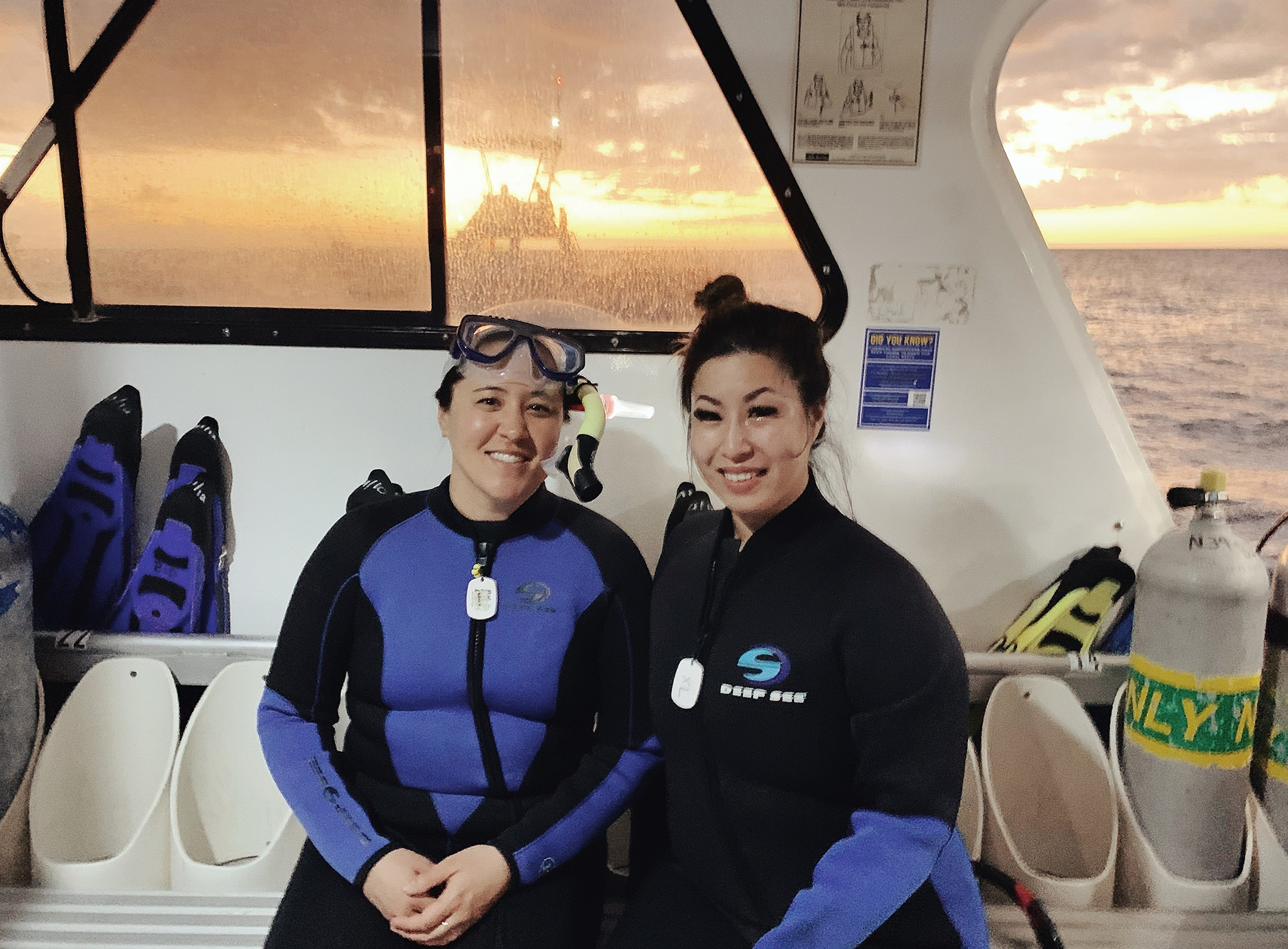 I managed to squirm into a wetsuit without accidentally pulling my legs through the armholes (success!) and waddled towards the back of the boat, feeling like overly full sausage casing. With flippers on my feet and mask and snorkel securely attached, I awkwardly flopped into the frigid water just as the last sliver of sunlight dipped below the horizon.

One of the last people to jump in, I doggy-paddled to the remaining spot open next to the nose of the surfboard-shaped floating raft. Lights were attached at the bottom, emanated a strong glow that would hopefully attract a shit-ton of plankton, especially since we had to compete with so many the other tours.

As instructed, our group crowded shoulder-to-shoulder around the raft, grabbed the attached handles and floated facedown, snorkel up to wait for hungry manta rays to appear. With my head submerged, the hubbub of noise above water became muted as I let my body sway with the lazy waves. 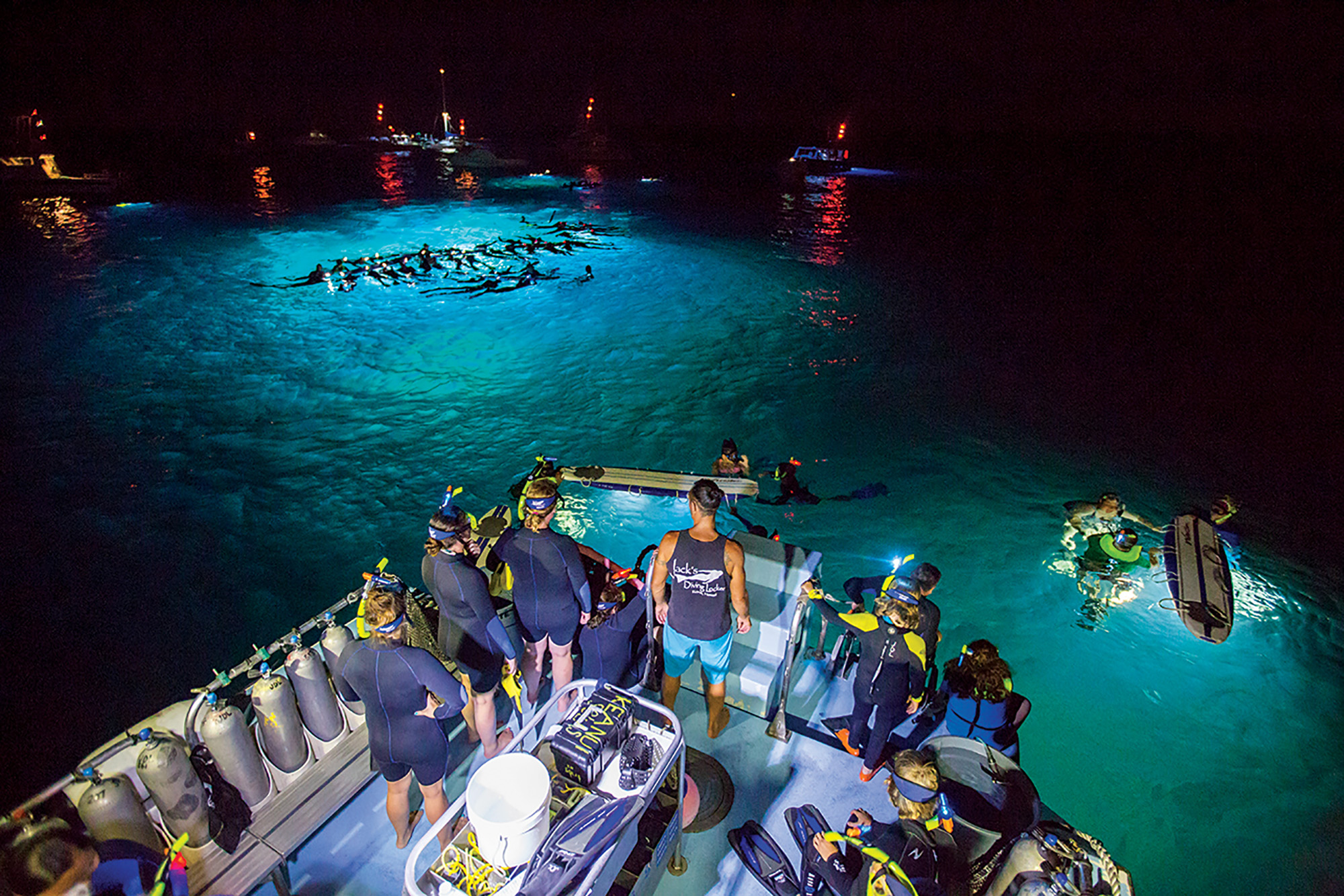 Knowing that there are no guarantees that the manta rays would show, I strained my eyes for any movement in the dark depths. In the distance, I caught a brief glimpse of ghostly shadow and mentally crossed my fingers that a) it was a manta ray and b) they’d somehow venture closer to our little raft of ALL the many rafts present that night.

I got a little more than I had bargained for.

As if somehow sensing my silent plea, one minute the water around us was empty and the next a massive figure was gliding towards us. 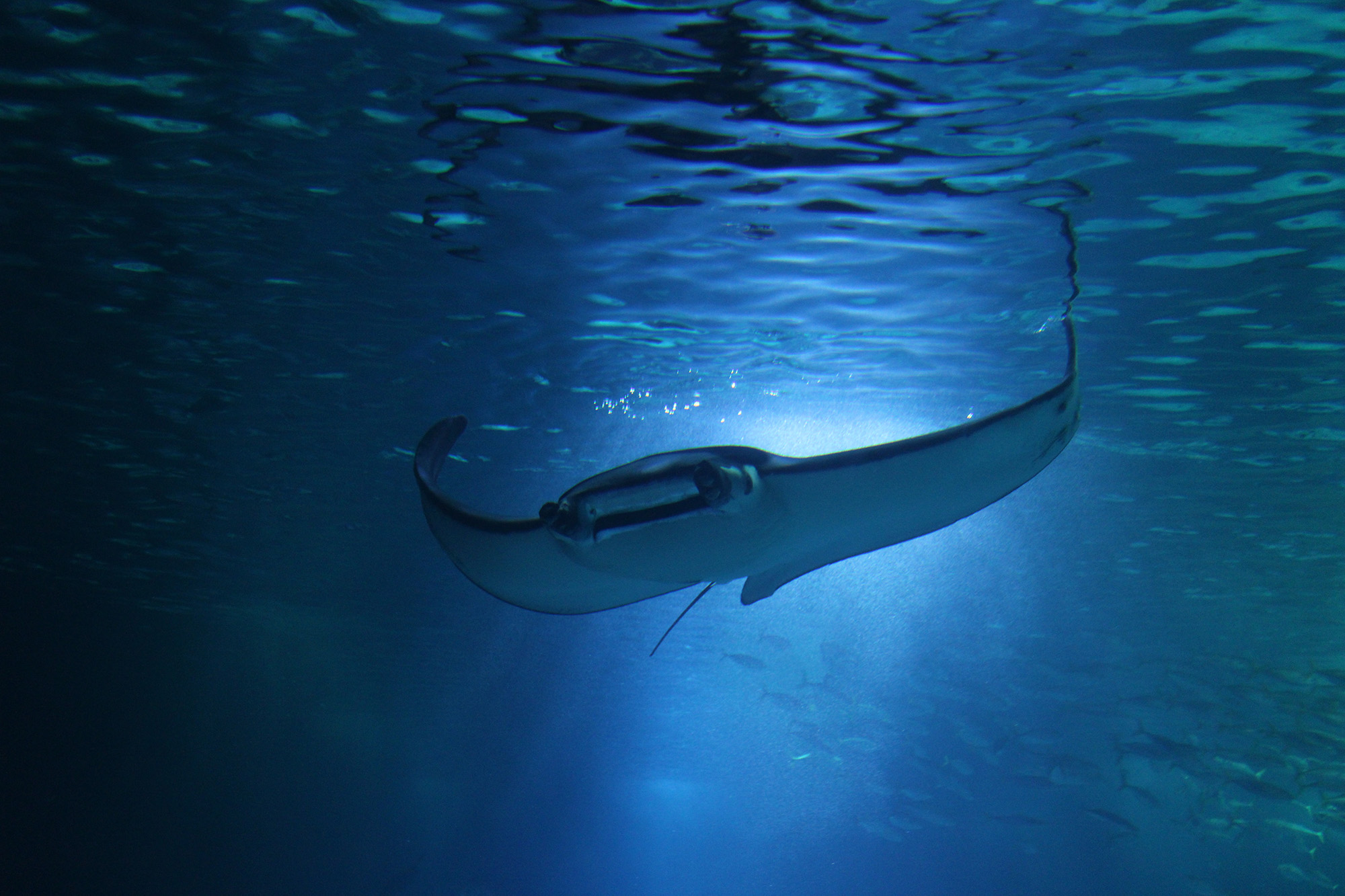 I was in a plankton hot zone at the tip of the lighted raft, and all I could see emerging from beyond the illuminated water was an enormous, gaping maw coming right at my face!

The gentle giant gulped mouthfuls of plankton directly in front of me before suddenly turning south within an inch of my nose. I almost missed it as I was busy swearing profanities into my snorkel. It repeated the cycle, gracefully somersaulting enough times to mesmerize us with its sweeping fins, undulating gills and mottled white belly while it feasted. It was so close, I could’ve lay on top of its sweeping form as it hovered a mere inch below me. But that would be inappropriate for a myriad of reasons, so I resisted the impulse.

We were lucky enough to be visited by a couple more hungry, hungry manta rays before our time in the water was up. I climbed back onto the boat, practically vibrating with excitement and sore shoulders from hanging on to the raft. On our journey back to the marina, I gazed at the stars shining brightly in the dark sky, revelling in my birthday week luck that I got to snorkel with manta rays in Hawaii!

If you have a fear of open water then this blog post about snorkelling with manta rays in Hawaii probably served as fodder for your nightmares. But I promise, there was absolutely nothing scary about it. It was a thrilling, one-in-a-lifetime experience that photos wouldn’t have been able to do justice even if I had managed to take any in the darkness. Of all the amazing memories I brought home from the Aloha State, this is at the top of the list.

If you’re trying to figure out how to fit snorkelling with manta rays in Hawaii into your schedule check this post out. 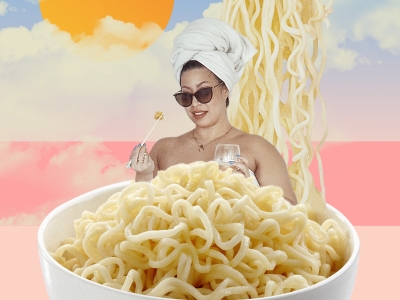 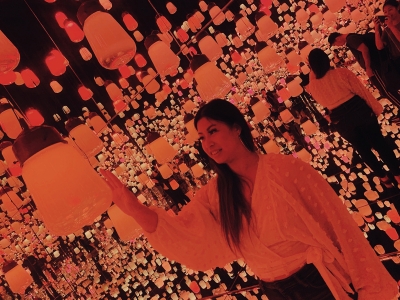 teamLab Borderless: Everything You Need To Know Before Going 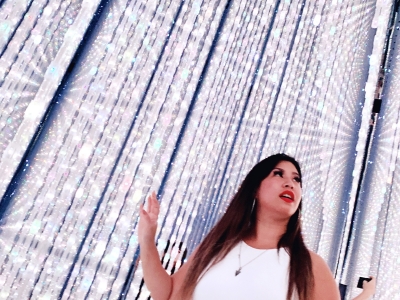 teamLab Planets: Everything You Need To Know Before Going

First thing I did upon arriving in Prince Edward C

There’s a quote that always kills me; it hits me

Did you know that studies have proven that merely

Weekends are for noods 🍜 Its funny — if you

If there’s one self-care habit to start during t