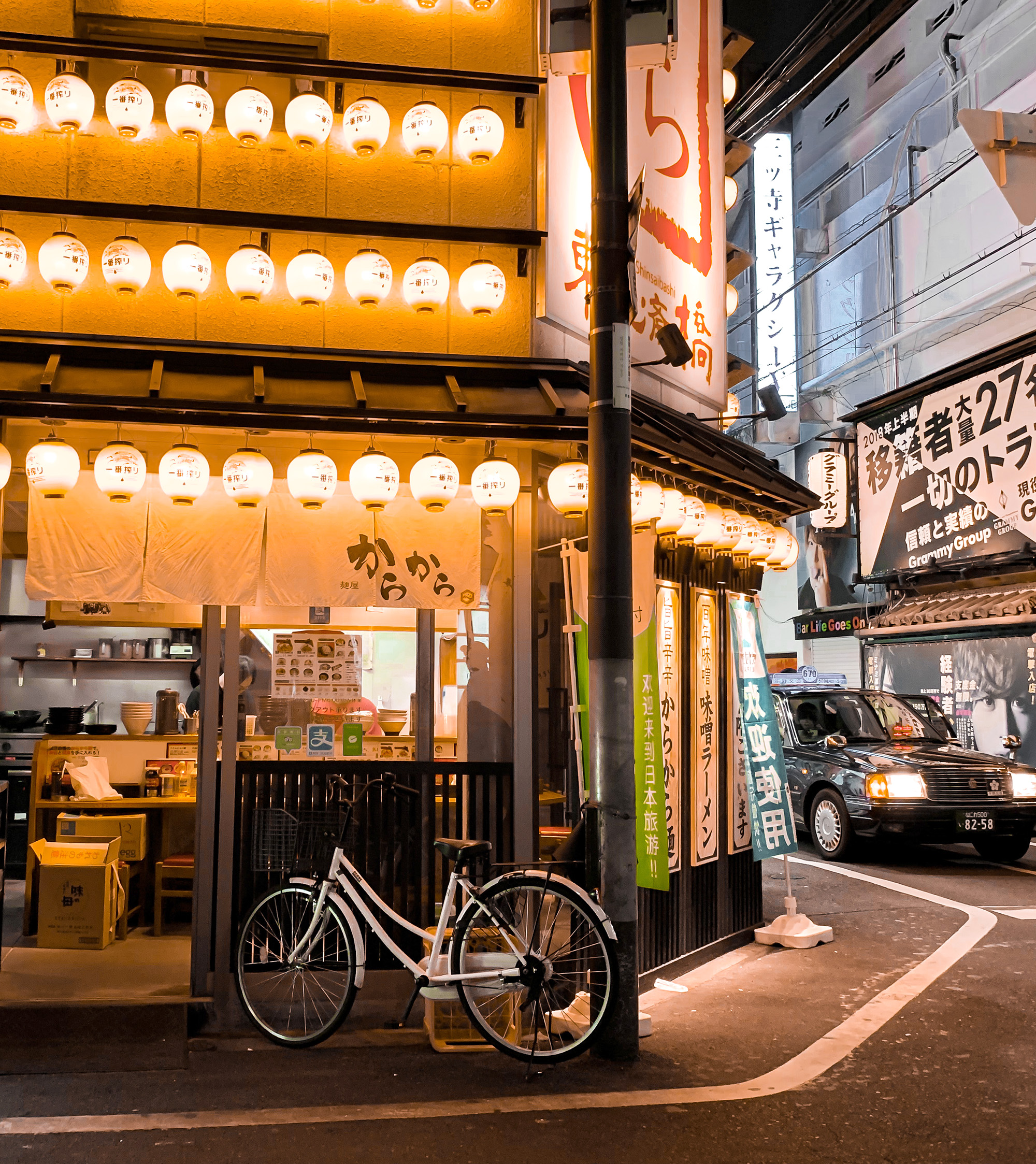 I was so excited to eat my way through the street food in Osaka that I couldn’t imagine anything getting in my way…cue the ominous music.

As the Japan’s third largest city and branded as Tenka no daidokoro — “the country’s kitchen” — Osaka resonated deep within my soul…and it just so happens that my soul resides in my stomach. It is THE place to gorge yourself silly as evidence of their motto and preferred pastime — kuidadore, loosely translating to “eat yourself to ruin,” something I do often regardless of my location.

Obsessive planner that I am, I’d even calculated exactly how many meals I could potentially consume during my 3 week trip. The regional street food in Osaka was a huge chunk of my culinary education in Japan and I was determined not to miss a single meal. 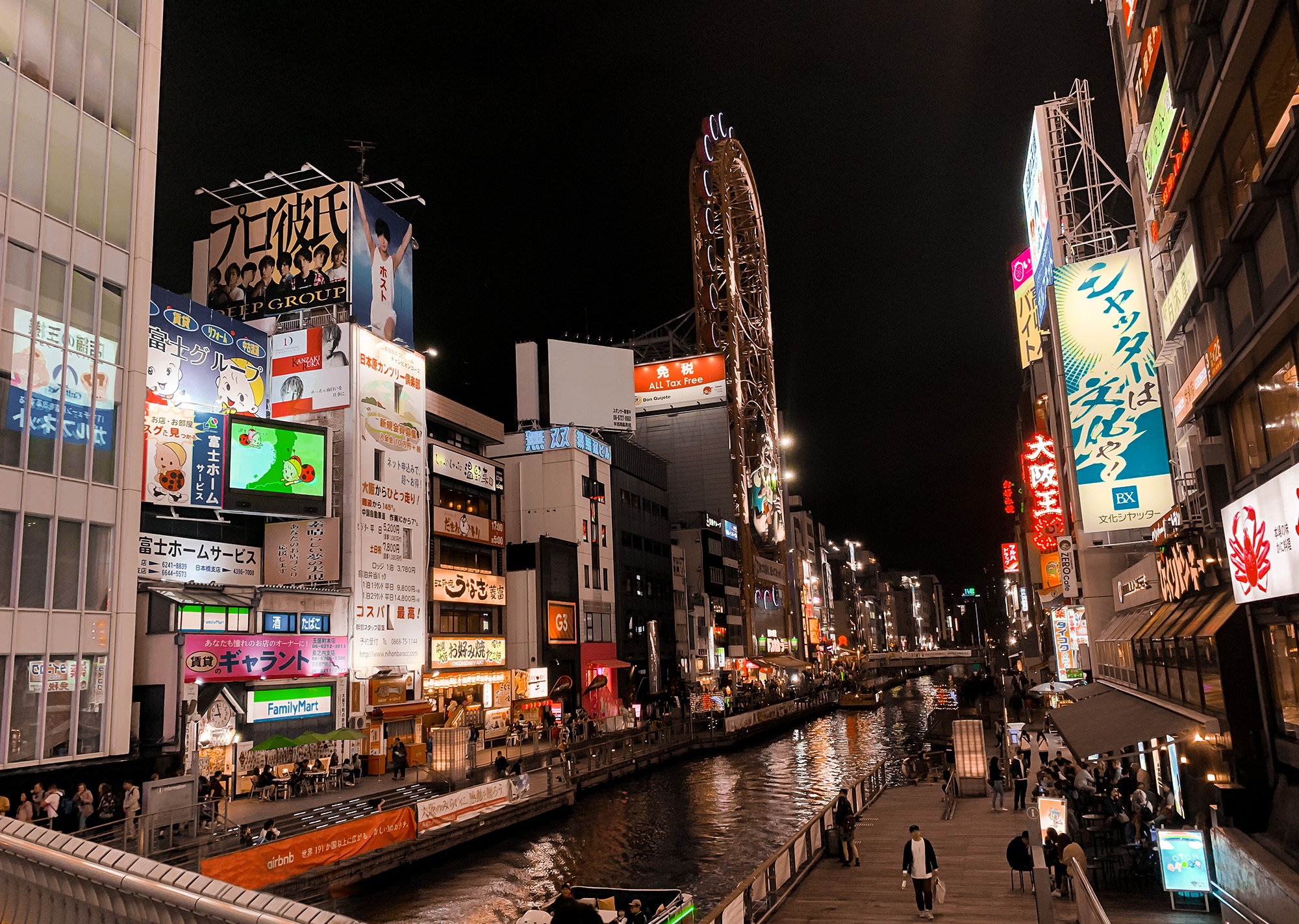 In case you’re ever unfortunate enough to experience the stomach flu, let me break down what you can look forward to: fever, headaches, cramps, vomiting and near-constant, debilitating diarrhea (to name a few).

During the first leg of the trip in Tokyo my symptoms were mild, easily attributed to jet lag and dehydration. By the time I was strolling through the Arashiyama Bamboo Grove in Kyoto a couple days later, my stomach was gurgling was like a clogged sink, loud enough to disturb the serene atmosphere. 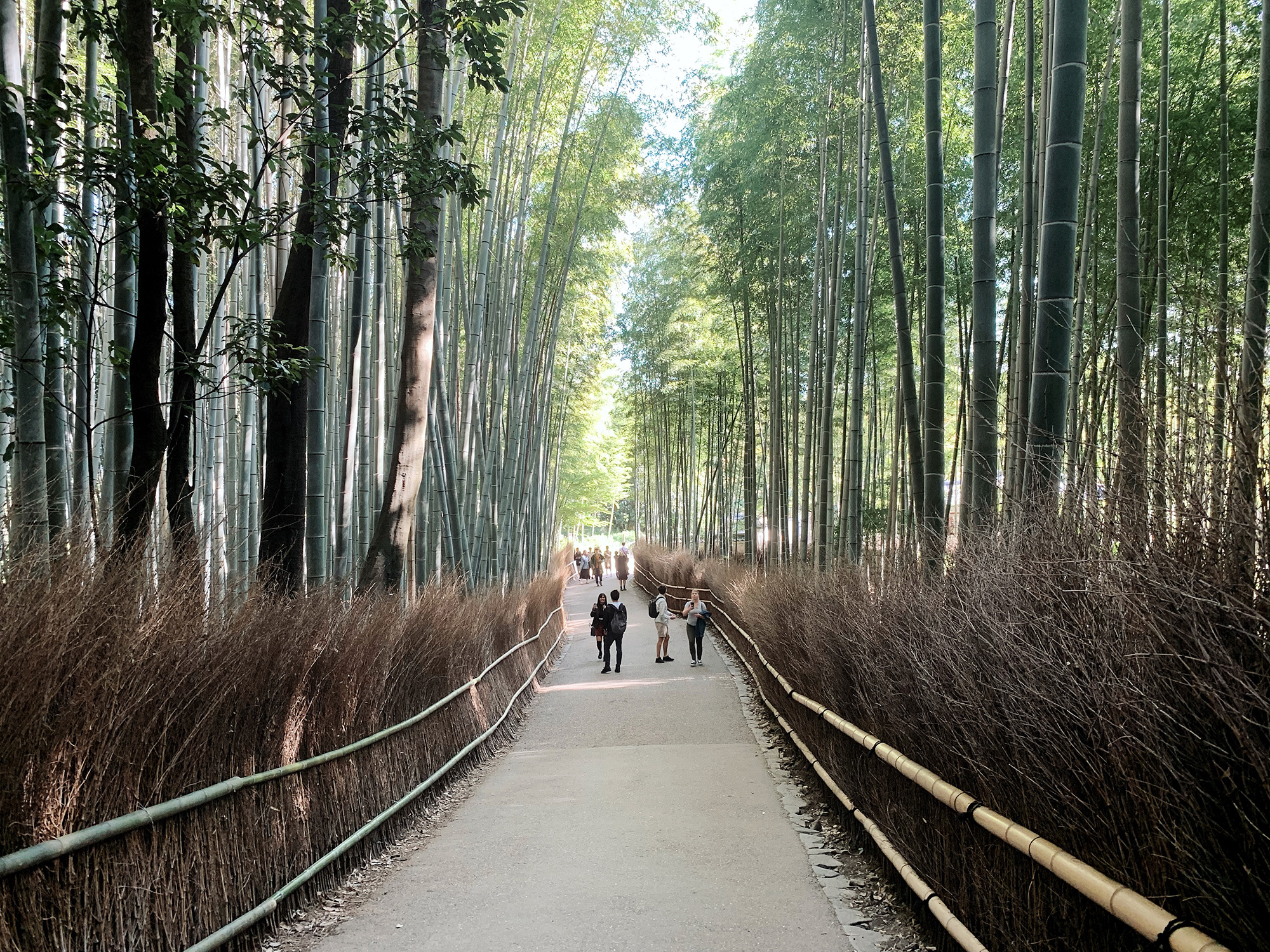 Oh, but I was a trooper!

Determined to get get my fill of fresh sashimi, hearty bowls of ramen and artful bites of mamezushi, I resigned myself to the reality that everything that entered my stomach would a) cause me immense pain and b) be quickly followed by a mass exodus of epic proportions.

To put it lightly, having the stomach flu was extremely inconvenient as I could never be more than a couple feet from a bathroom. As if that wasn’t bad enough, on our last night in Kyoto, my intestinal situation ascended to excessively mortifying heights during an elegant kaiseki feast, a traditional multi-course Japanese meal. 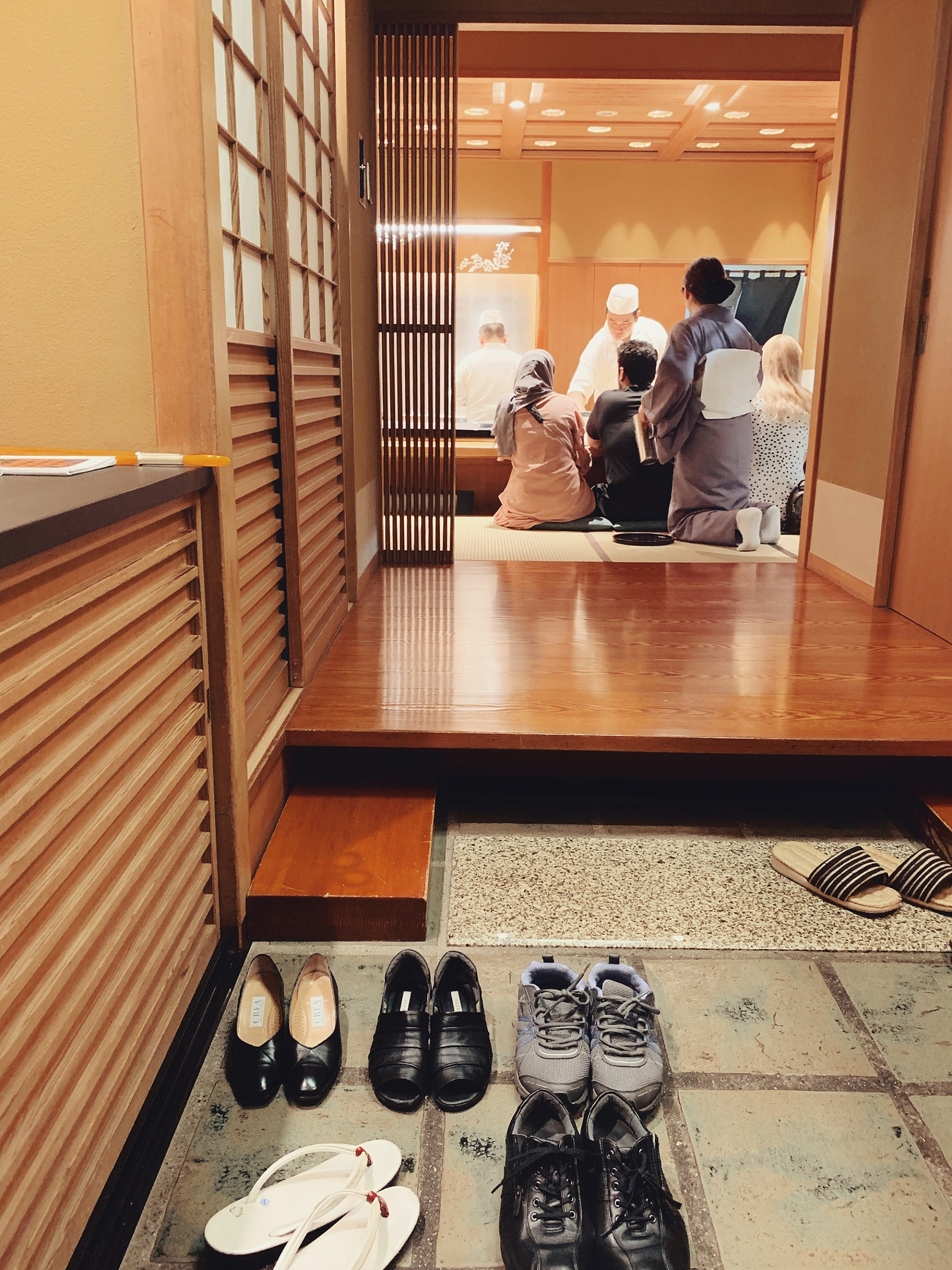 When I excused myself from the table to *ahem* “freshen up,” a kimono-bedecked attendant guided my feet into wooden platform slippers before personally ushering me to the bathroom. Instead of returning to the dining room, she gracefully knelt to wait just outside the tiny space to  shepherd me back to the table.

Unfortunately for me (and for her as she’d soon find out), all that separated us was a delicate shoji, a thin door made of flimsy, translucent paper on a lattice frame. Obviously not soundproofed.

Maybe when Japanese people go to the bathroom it sounds like a melodic symphony, but in comparison I sounded like the entire percussion section.

Despite my best efforts to control my sphincter, my bowels sounded like a chew toy being worked over by a hyperactive chihuahua.

When I finally emerged from my solo performance in the bathroom, I couldn’t bear to make eye contact with the attendant. I gave an abbreviated bow, hurriedly spitting out “Arigato gozaimasssuuuu,” before rushing back to my seat, abandoning her in stunned silence. 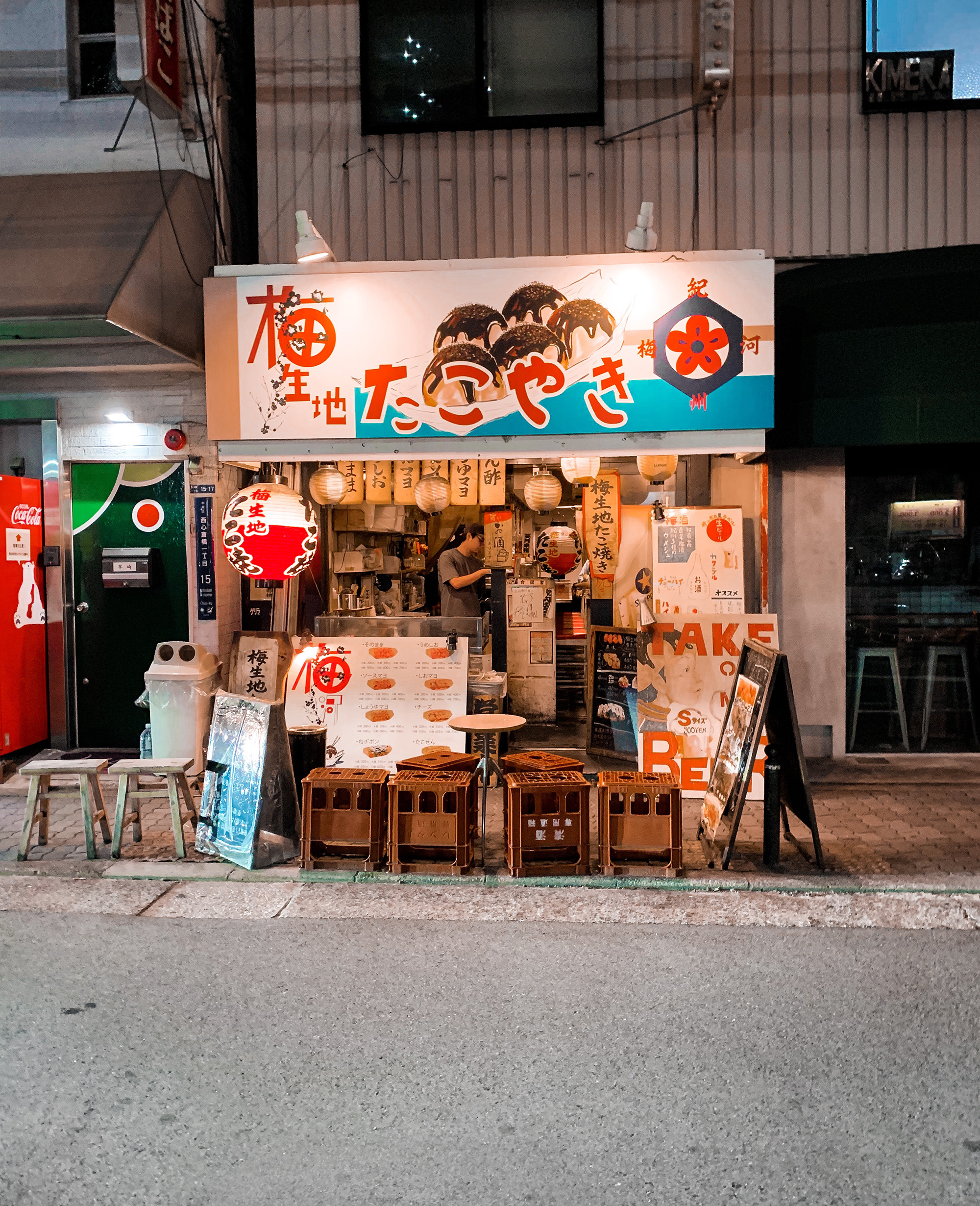 Searching for Street Food in Osaka

After chugging bottle upon bottle of Pocari Sweat (a health drink full of electrolytes that replenish the body with fluids) and popping stomach pain medication like Tic Tacs, I was ready to conquer the street food in Osaka.

Or at least I desperately wanted to be ready.

With limited time and compromised stomach real estate, I honed in on the most essential of street food in Osaka: takoyaki and okonomiyaki. 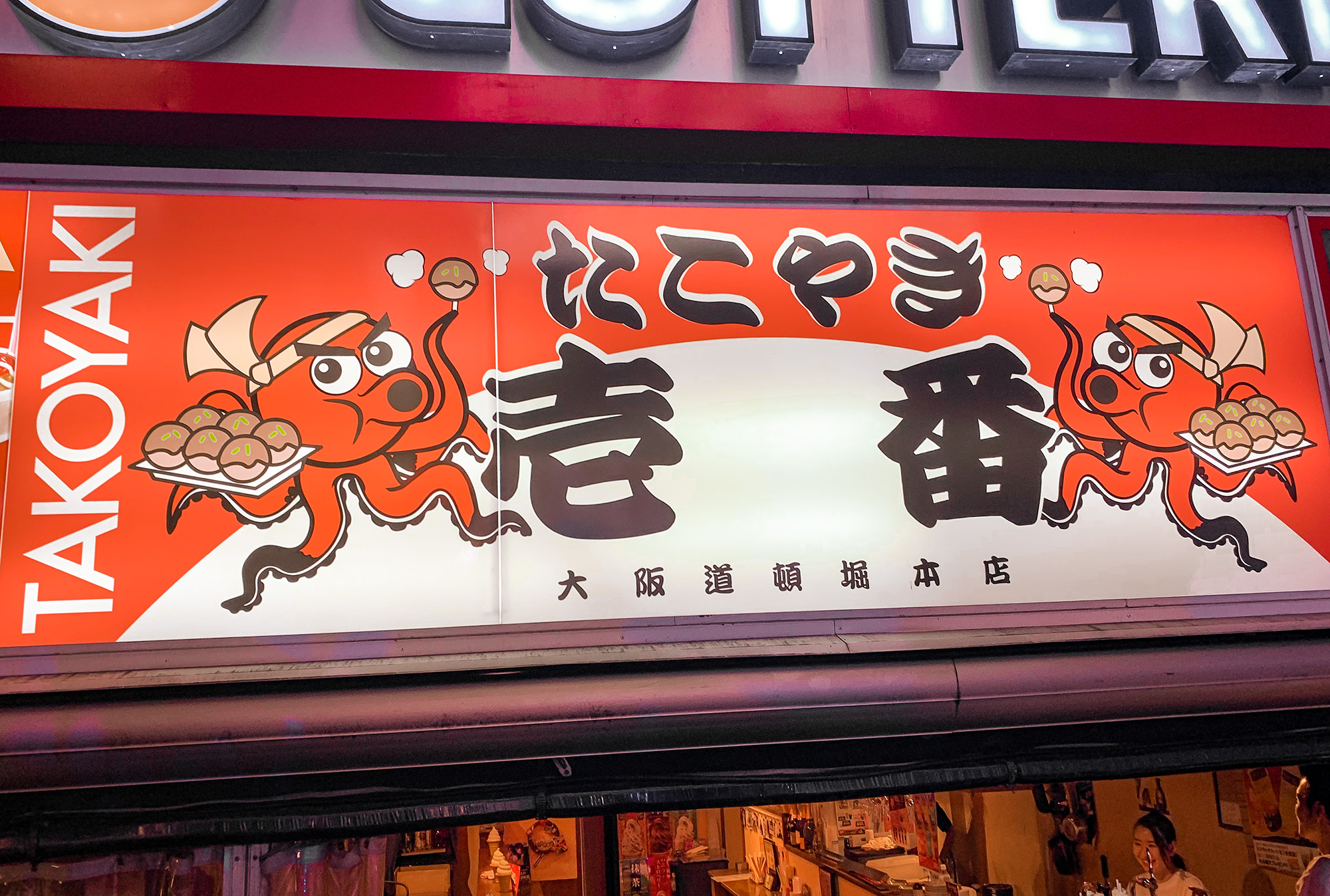 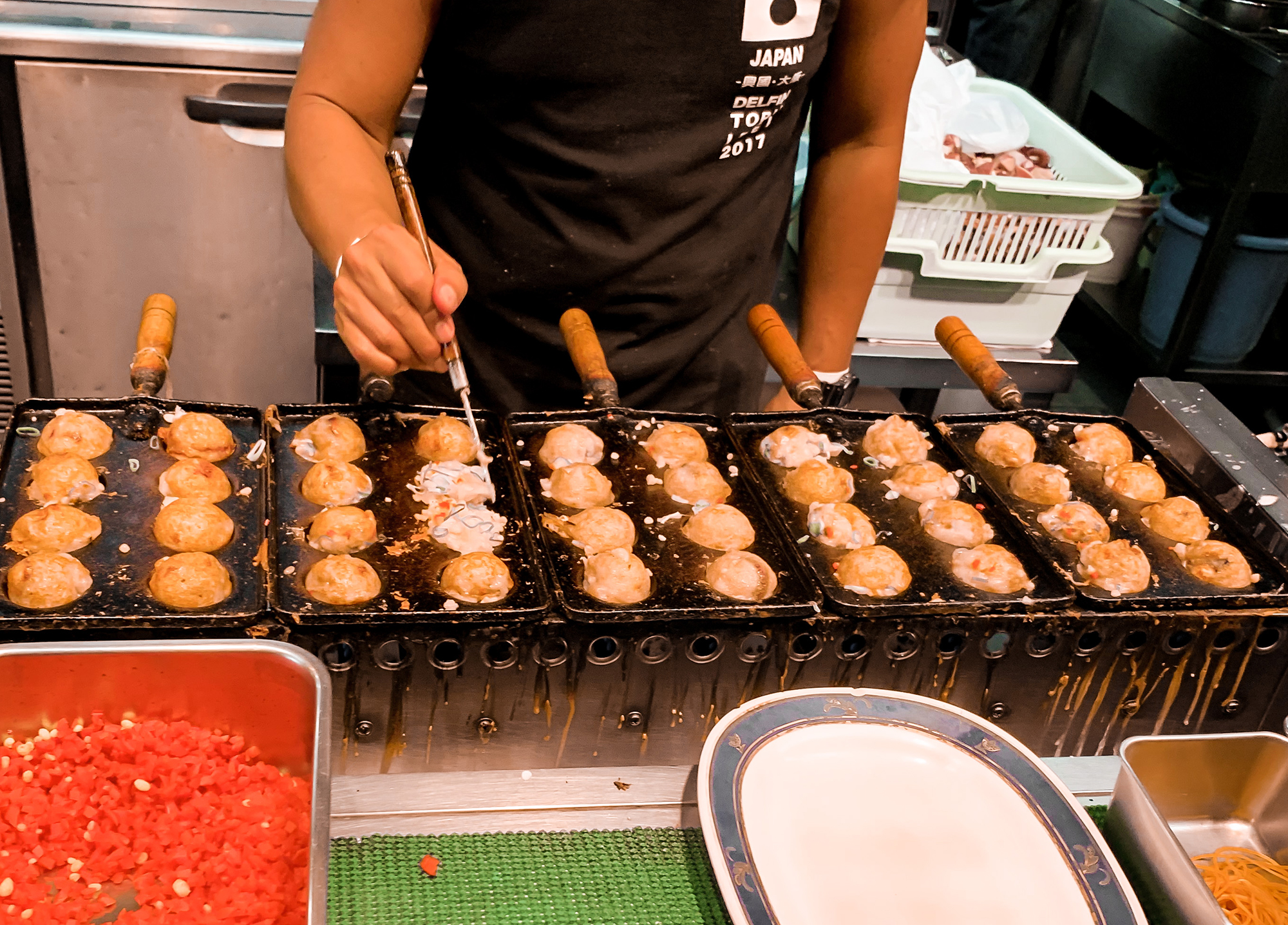 Both takoyaki (octopus balls) and okonomiyaki (savoury pancakes) were elevated to must-eat status during my visit as they originated in the Kansai region of Osaka.

These konamon (flour foods) were affordable and deeply satisfying, particularly in the post-war era when when food was scarce.

While undoubtedly delicious and comforting, I was a little apprehensive about how my recovering stomach would react to such adventurous delicacies. I was no longer in the eye of the stomach flu storm but the debilitating effects lingered, leaving me nauseated at the prospect of eating anything more flavourful than plain crackers. 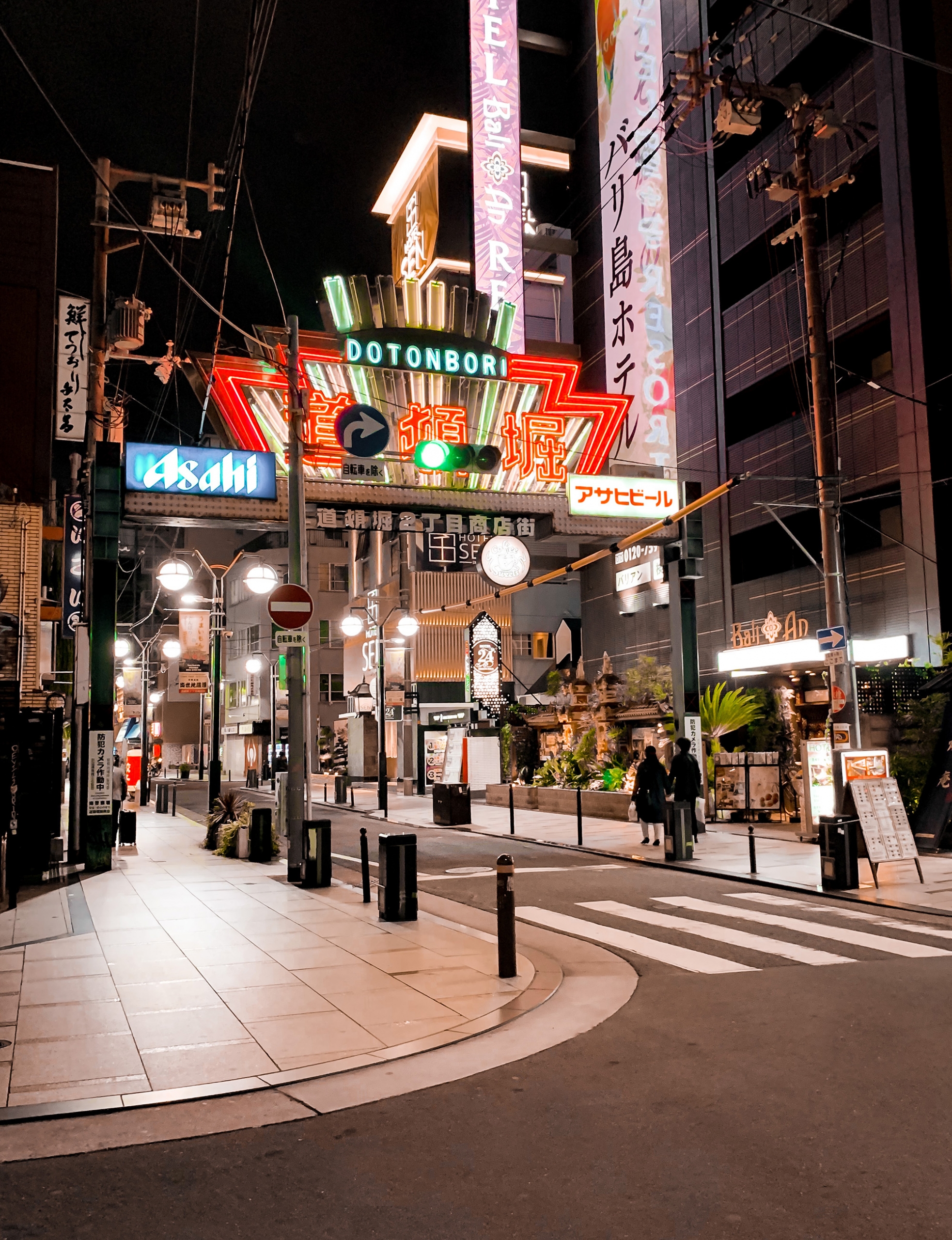 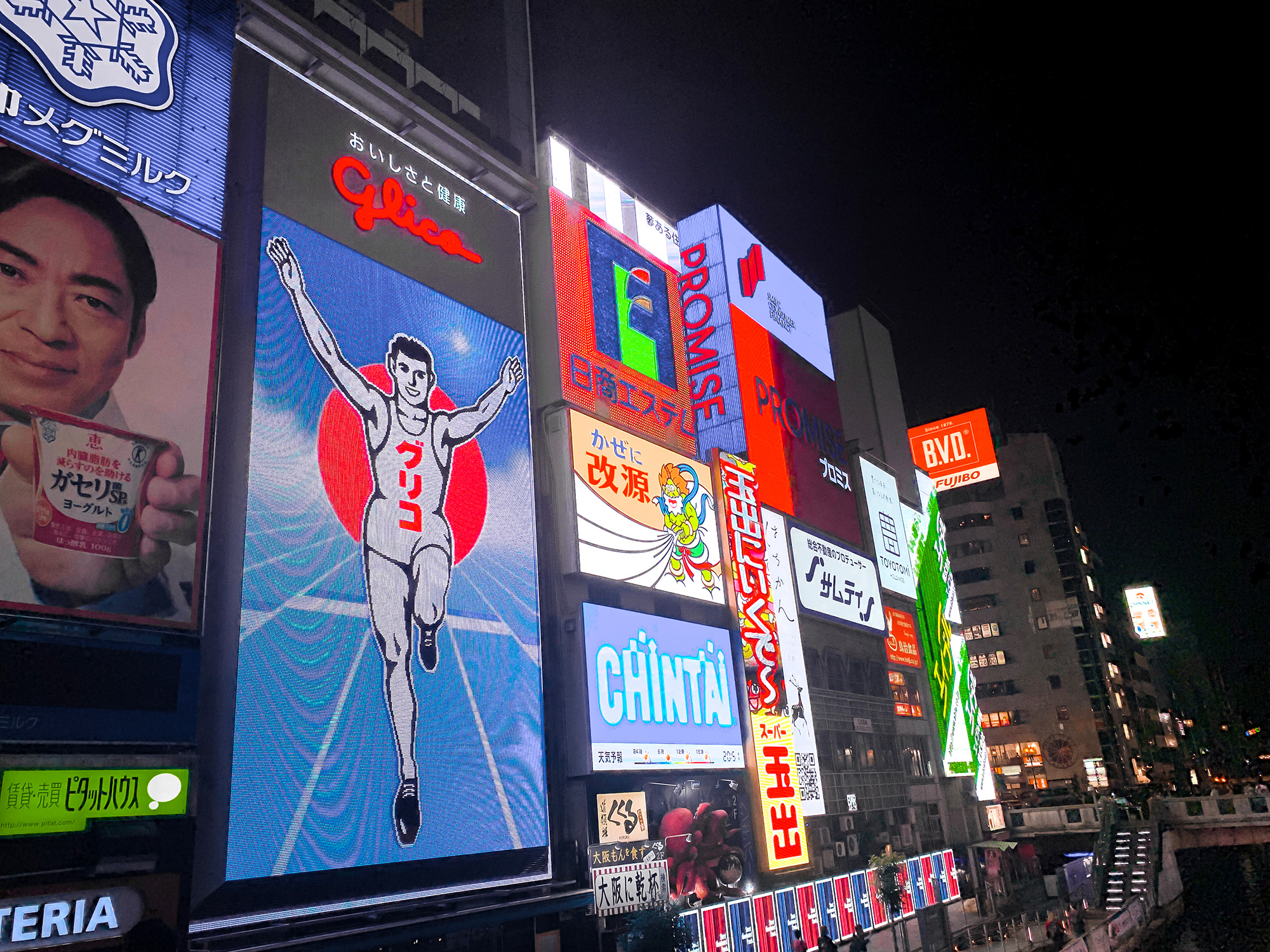 But I stubbornly persevered, roaming the brightly-lit Dotonbori — the entertainment district at the heart of the city — for the most authentic of street food in Osaka, armed with a strong will and a chapped behind.

With the infamous glowing Glico Running Man sign cheering me on in the background, I navigated through the hungry crowd along the Dotonbori Canal to Tako Tako King. 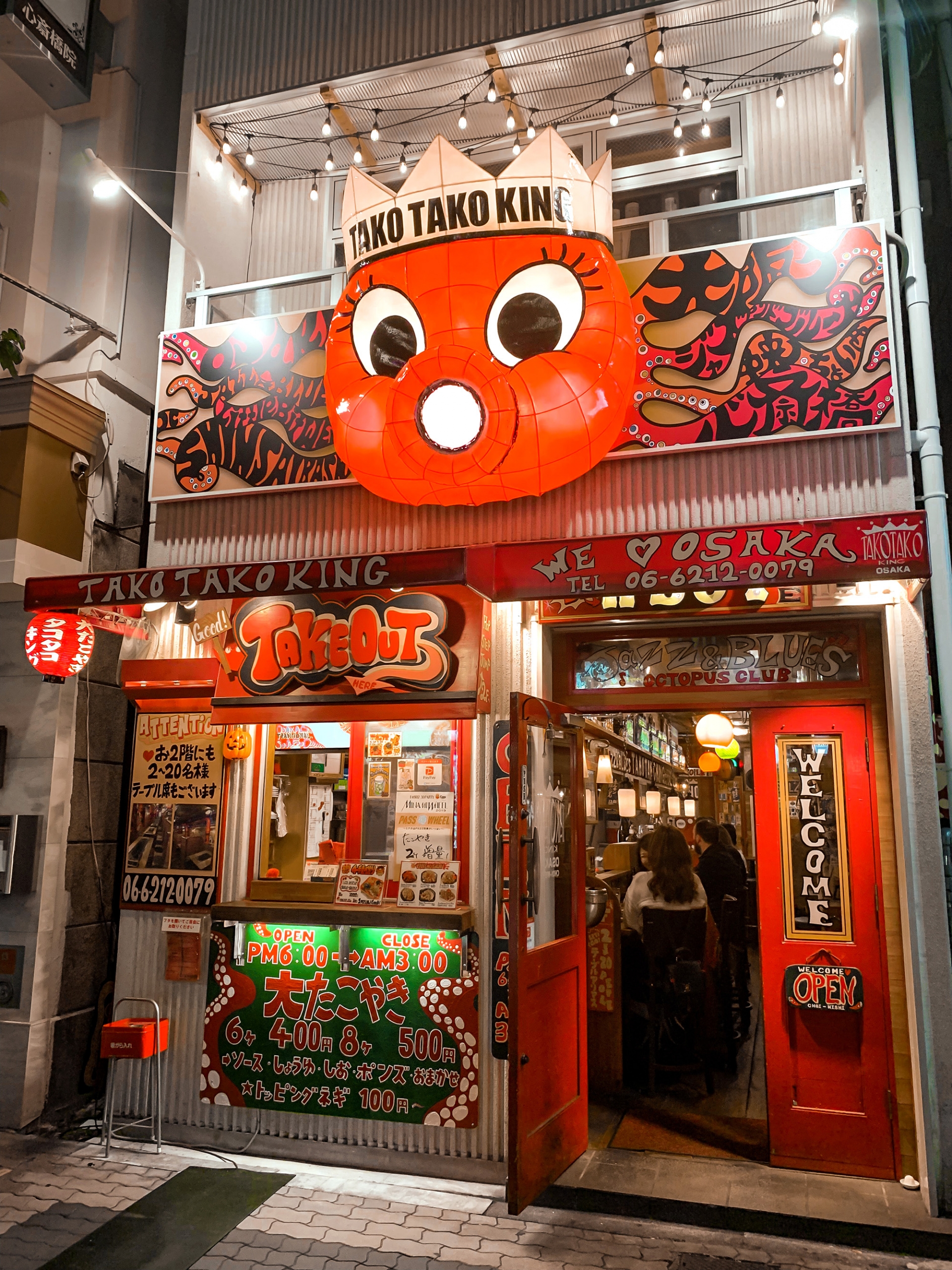 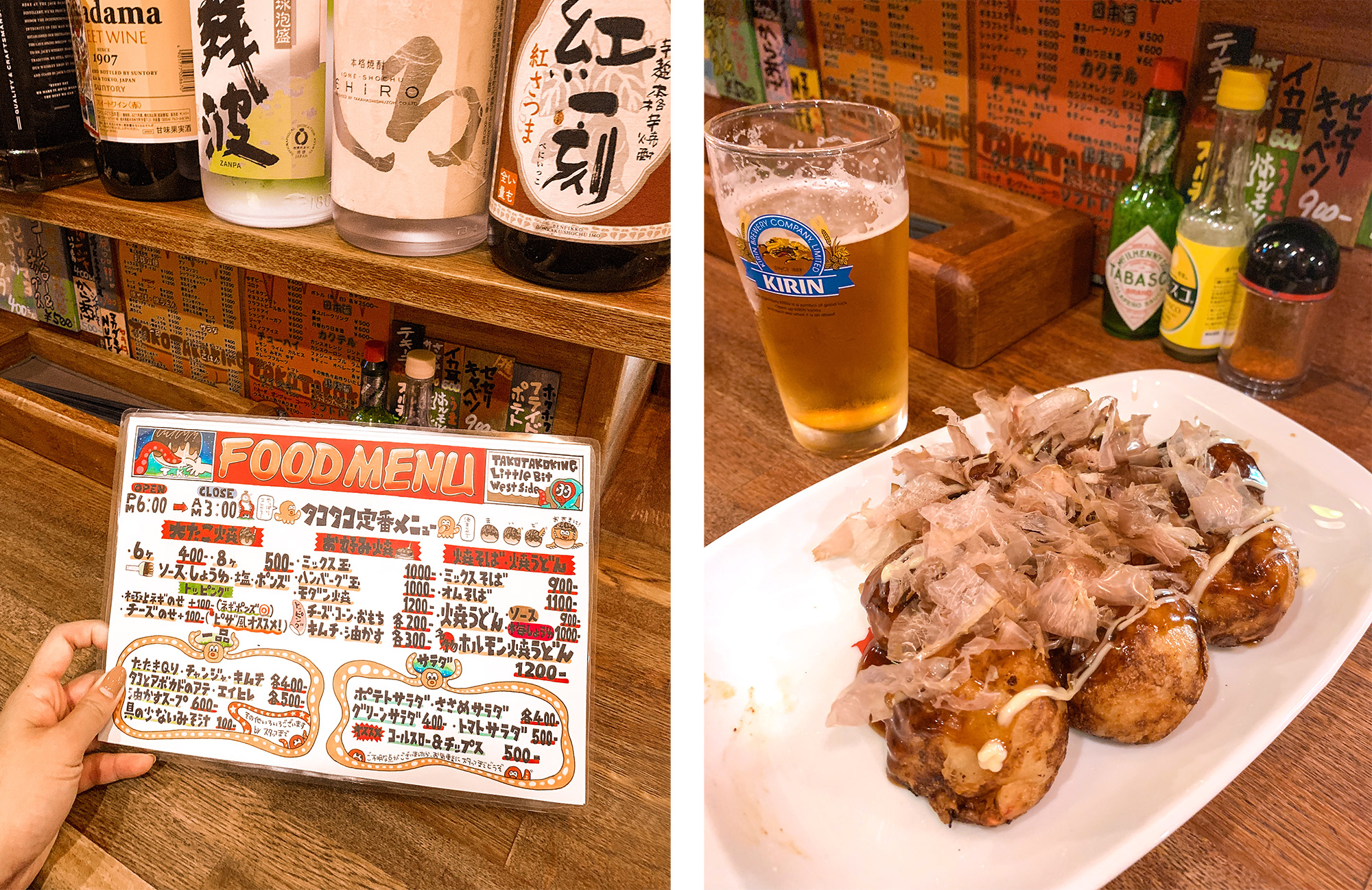 A crowned and puckered octopus figurehead reigned supreme over the doorway, regally welcoming me in to the whimsical jazz & blues takoyaki bar. Taking a seat at the bar and sipping a frosty beer, I pretended to consider the items on the colourful, hand drawn menu before ordering exactly what I was there to eat.

First came the takoyaki and if you know any Japanese, then you’ll be able to guess what main ingredient is. Translating to ‘grilled octopus,’ this spherical street food in Osaka appeared fresh from the special pan it was cooked in to shape the batter, containing succulent minced octopus and topped in sauce, kewpie mayo and bonito flakes that gently curled from the heat. 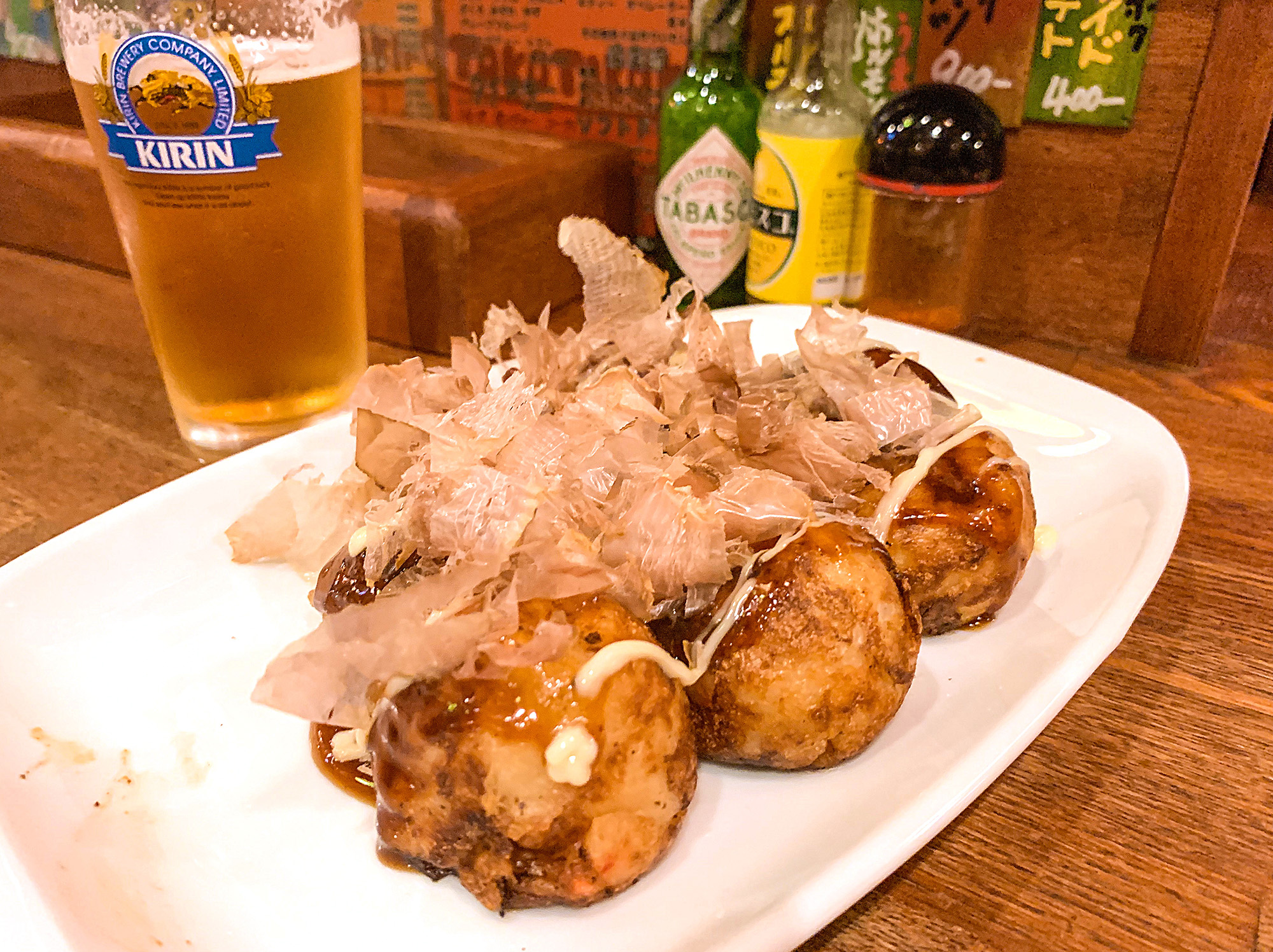 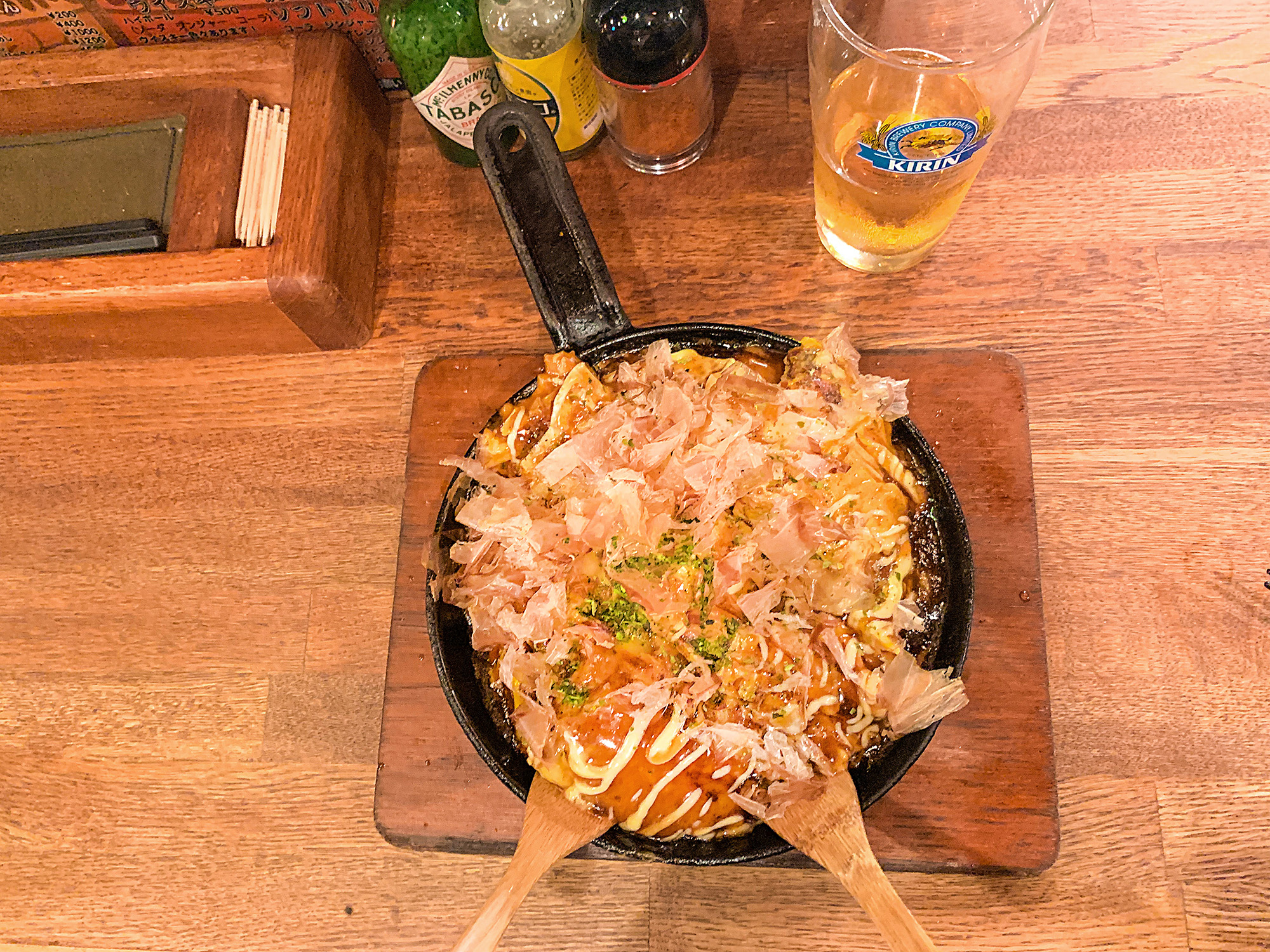 Next, the okonomiyaki arrived. Literally translating to “whatever you like, cooked,” this thick, savoury pancake is usually made of whatever ingredients is on hand. This particular one was delivered in a sizzling skillet and had tender morsels of pork and squid mixed in the batter with shredded cabbage, egg, kimchi and dressed with a special sauce, Japanese mayo and dried bonito shavings. 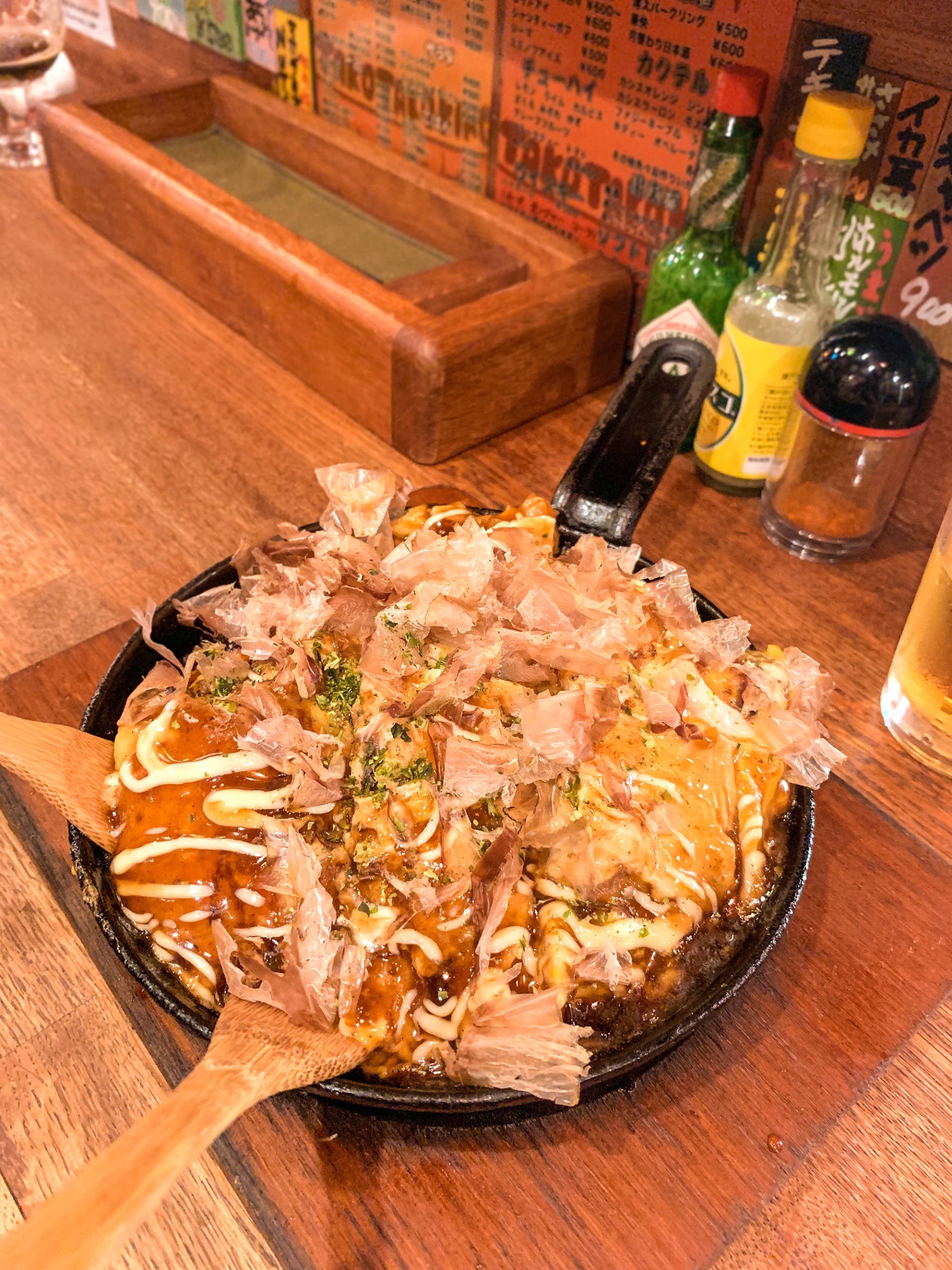 Verdict: Was takoyaki and okonomiyaki delicious? Of course! They are the pinnacle of street food in Osaka and it doesn’t get more authentic than eating these dishes in the city they originated in.

But considering I could barely keep dry toast down at this point, was it the best idea to indulge in such pungently saucy delicacies? Definitely not but #priorities.

In a way, I had THE MOST authentic experience in Osaka, fully embracing the meaning of kuidore and eating myself to absolute ruin. And I wouldn’t have it any other way.

Considering that I’m the kind of person who eats meat stews that have been left out of the fridge overnight and view expiration dates as mere suggestions, I’m actually surprised I hadn’t suffered from stomach issues earlier. I suppose it was my time. This just means that I’ll have to trek to Japan again to give the street food in Osaka another try 😜 preferably when I’m not experiencing explosive diarrhea. Was that TMI? Was this entire post TMI? Oh well.

If you want to keep this eating train going, check out this post about eating your way through the Tsukiji Market. 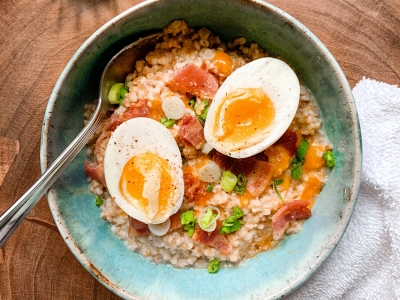 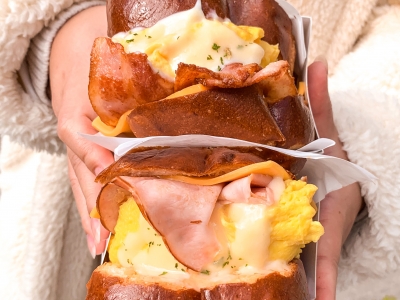