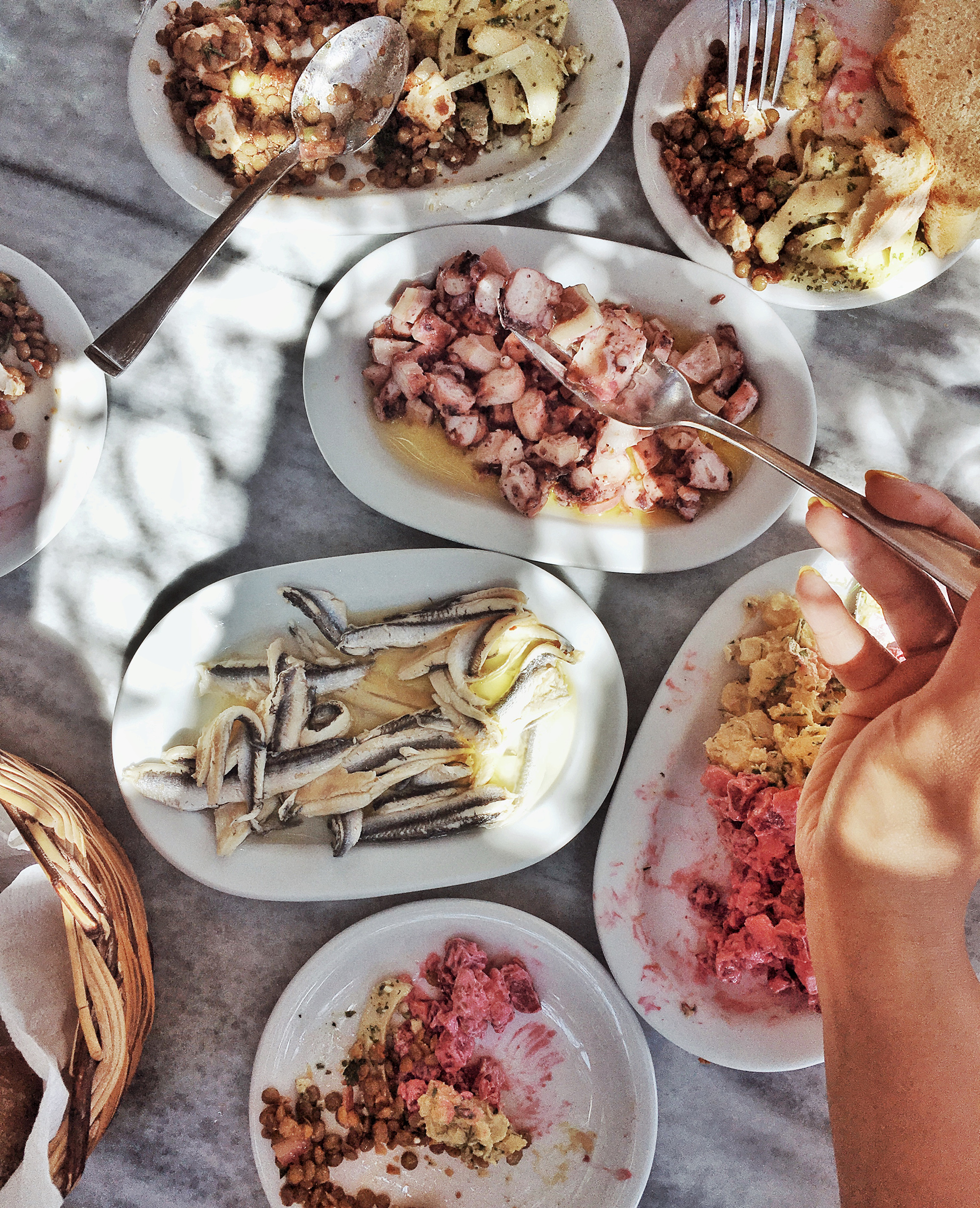 When I refer to Kiki’s Tavern in Mykonos, let me clarify what I mean.

Kiki can mean different things. According to a catchy Scissor Sisters song it’s “a party for calming all your nerves”. If you’re a Drake fan, it’s a dance challenge that may result in getting you arrested as it requires that you jump out of a moving car to do it. Probably not the best idea.

In Mykonos, Kiki’s is considered the best taverna to dine al fresco on the entire island. Plus, it’s oddly satisfying to say. Makes me feel very festive. Try it: Kee-kee! 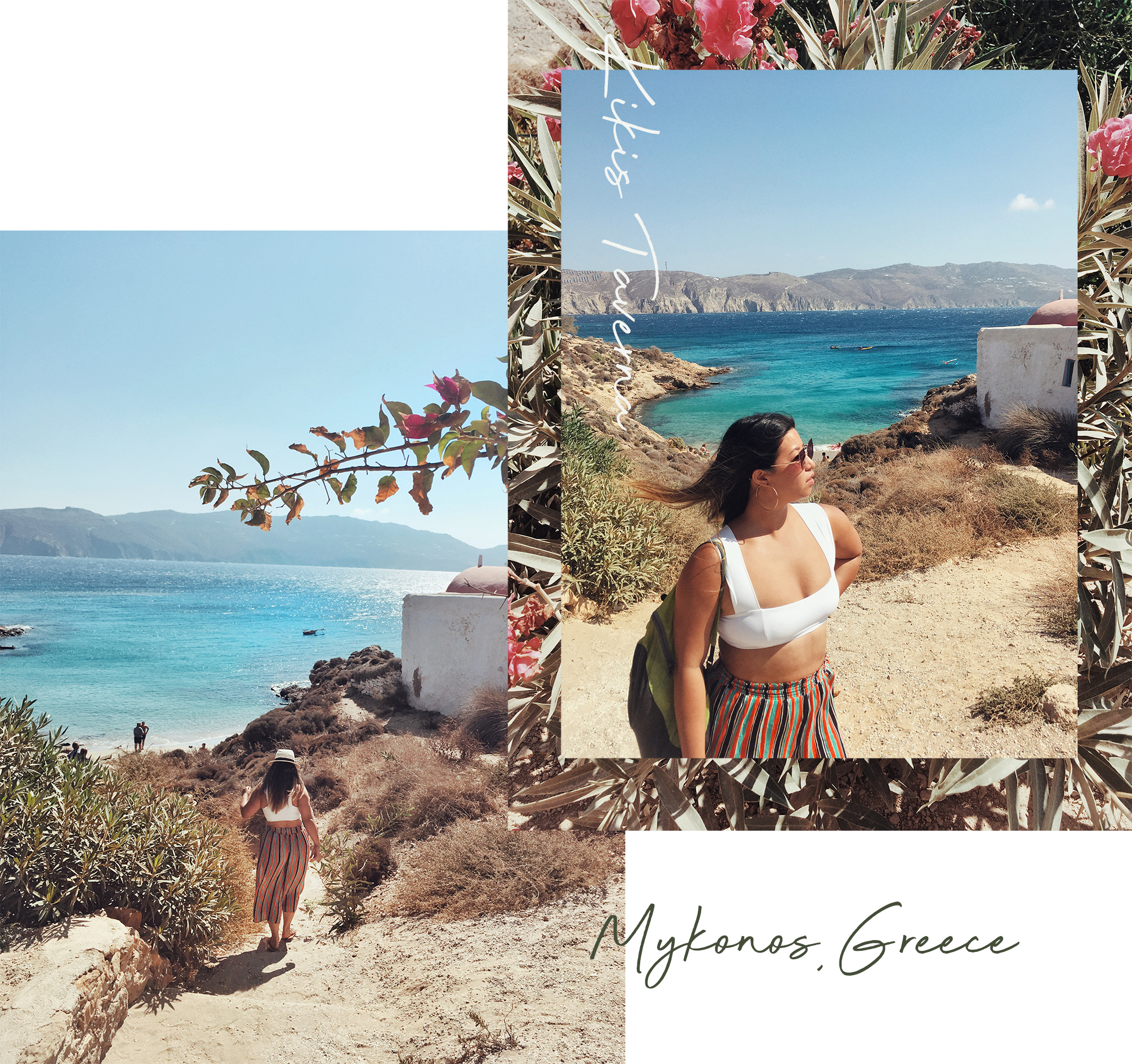 How to get to kiki’s tavern:

It’s kind of a pain in the derrière to get to Kiki’s Tavern as there are very few taxis on the island and no direct buses. You can take a bus to Panormos Beach and walk for about 20 minutes but I’d recommend renting a car/ATV/scooter.

Alternatively, you can hail a taxi from a busy area in Mykonos town for about €20 – 25  to drop you off on the northern tip of the island. 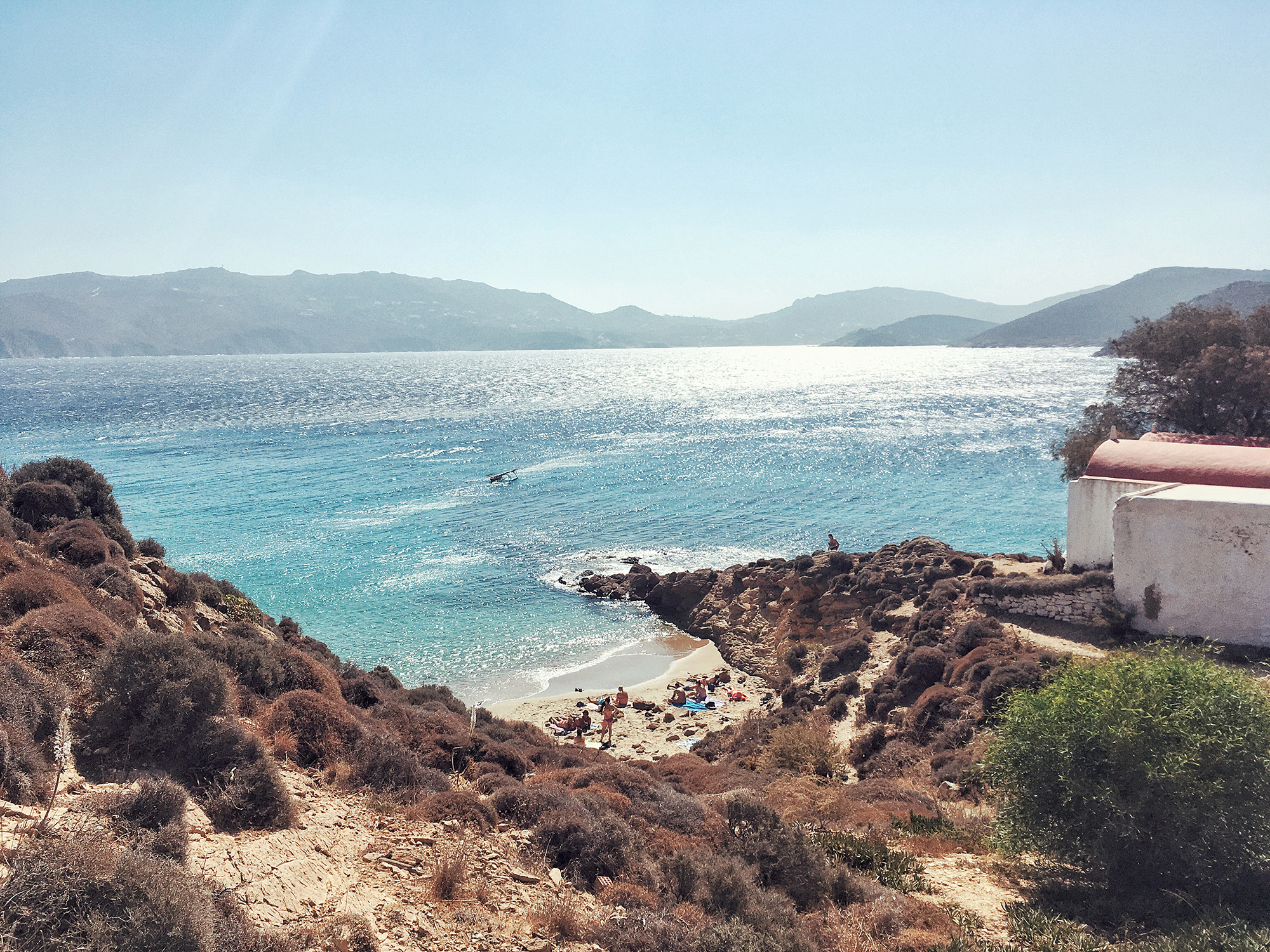 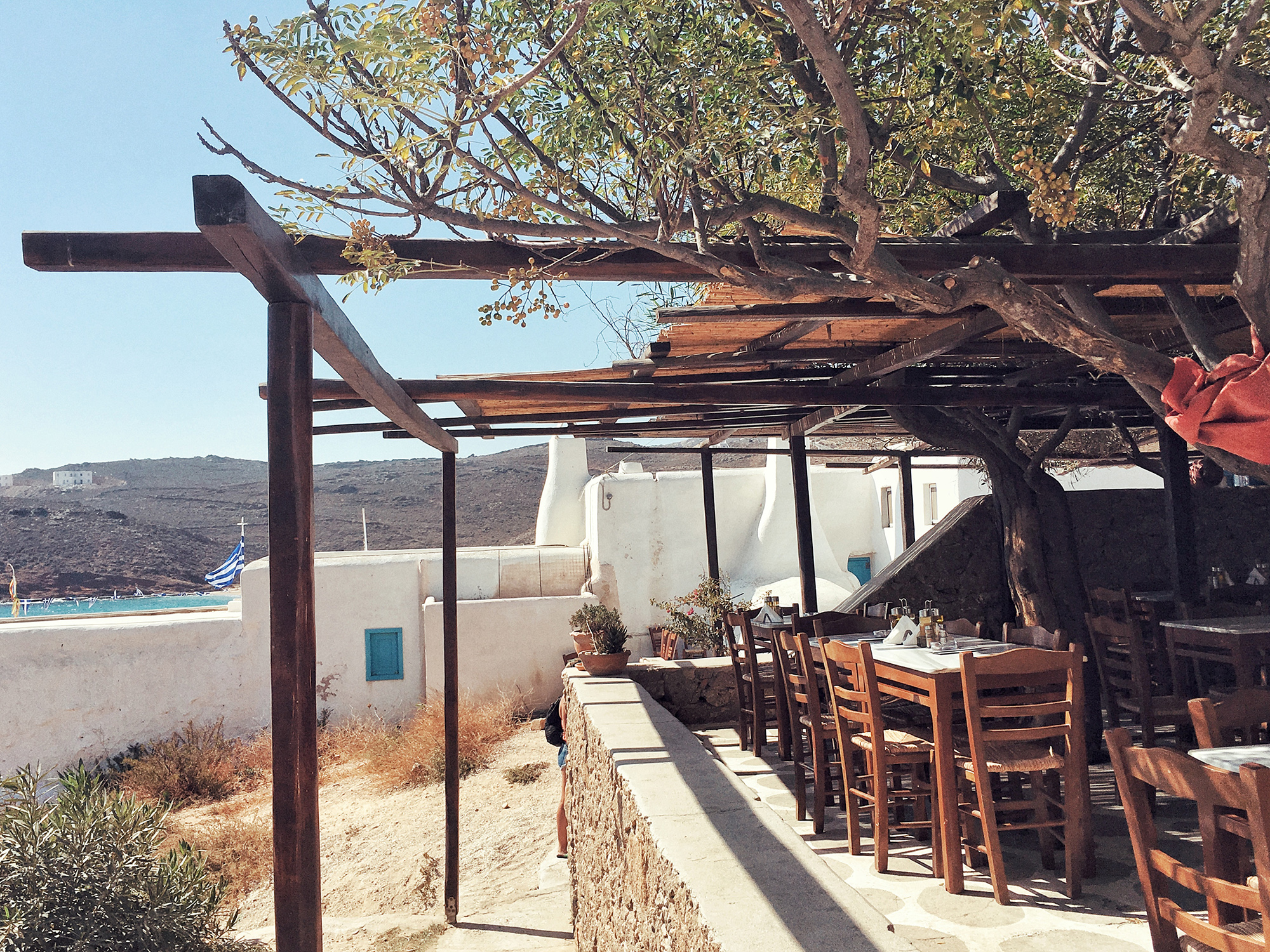 We  commandeered a taxi from Mykonos Town that dropped us off on a narrow dirt path that led us alongside quaint white churches. We almost missed the thatched wooden awning draped in foliage that is the entrance of the open-air Kiki’s Taverna.

Even before I knew that Kiki’s Taverna operated electricity-free (the food is cooked on a grill and closes before the sun sets) I could tell it was the essence of pure and simple living. A perfect example was witnessing the warm and welcoming owner, Vassilis, trundle down the sandy path to the little inlet beach for a quick, pre-shift dip (living his best life!) before jotting names down on the waiting list. 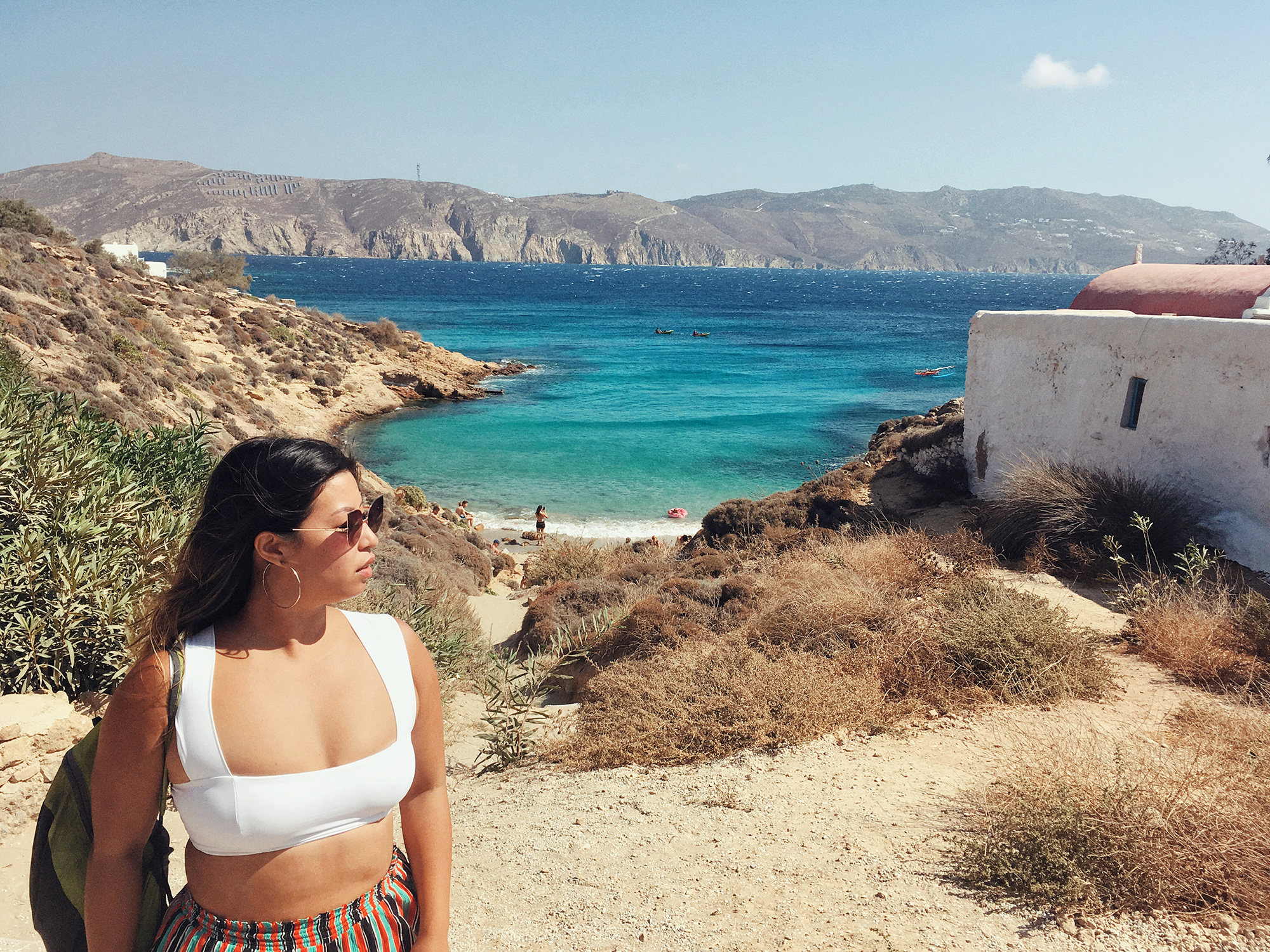 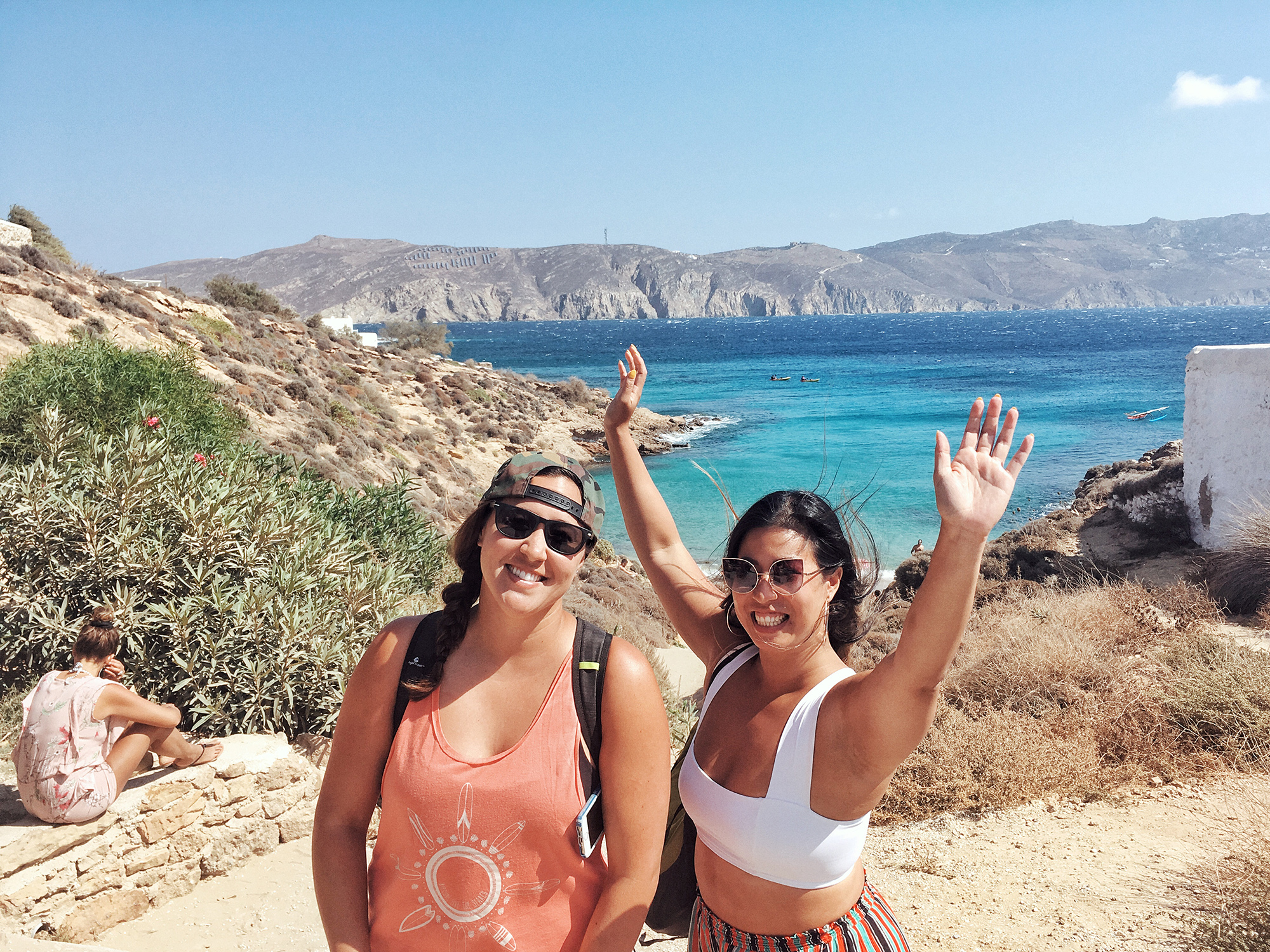 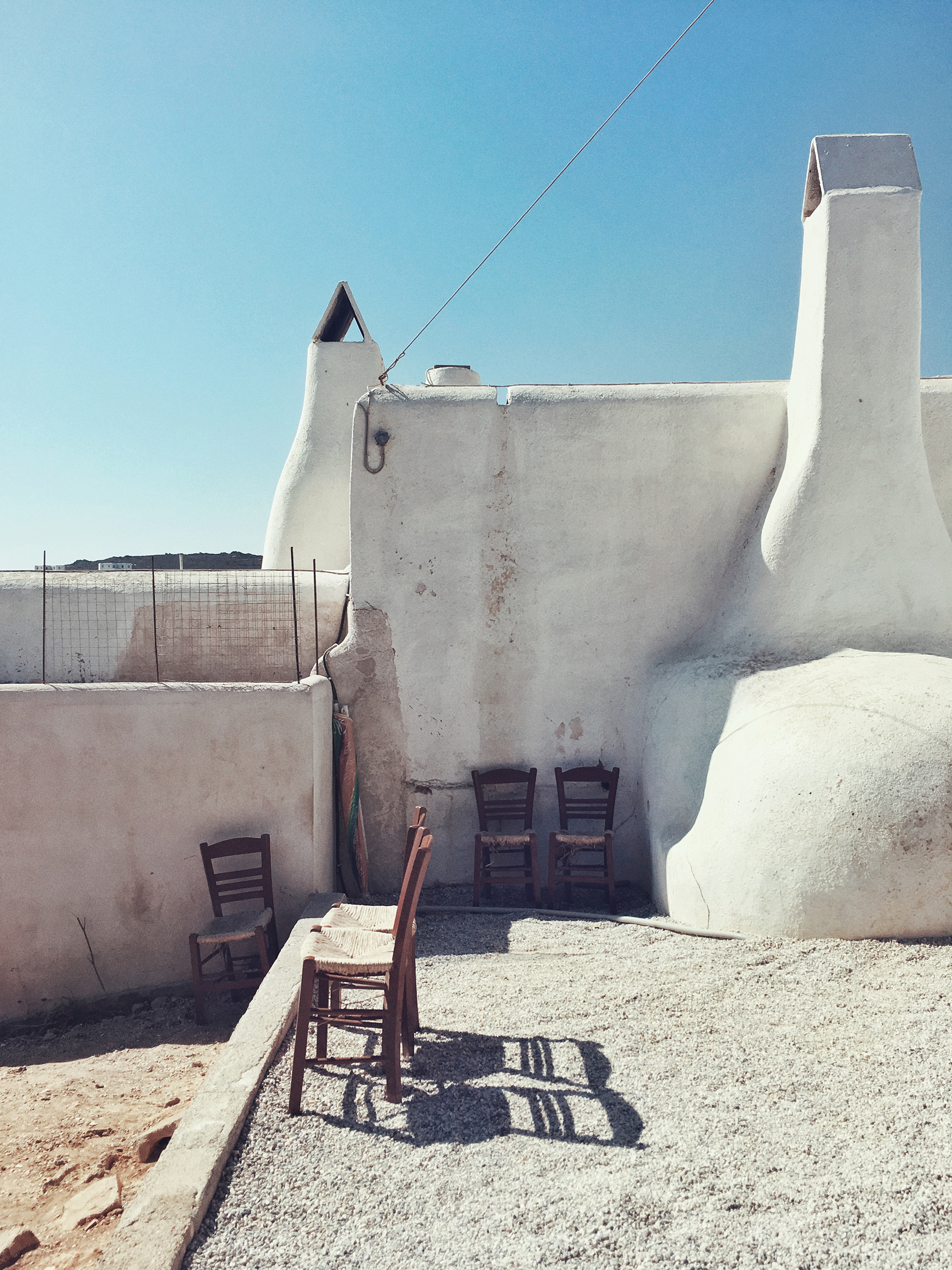 GOOD THINGS COME TO THOSE WHO WAIT

Speaking of waiting – you will be doing a minimum of 30 minutes to an hour of it.  We arrived at 11:30am – an hour before the taverna opened – and there was already a couple of people ahead of us in line. If you care about having a great view, it’s worth noting that the further up the line you are, the better the seats/view. 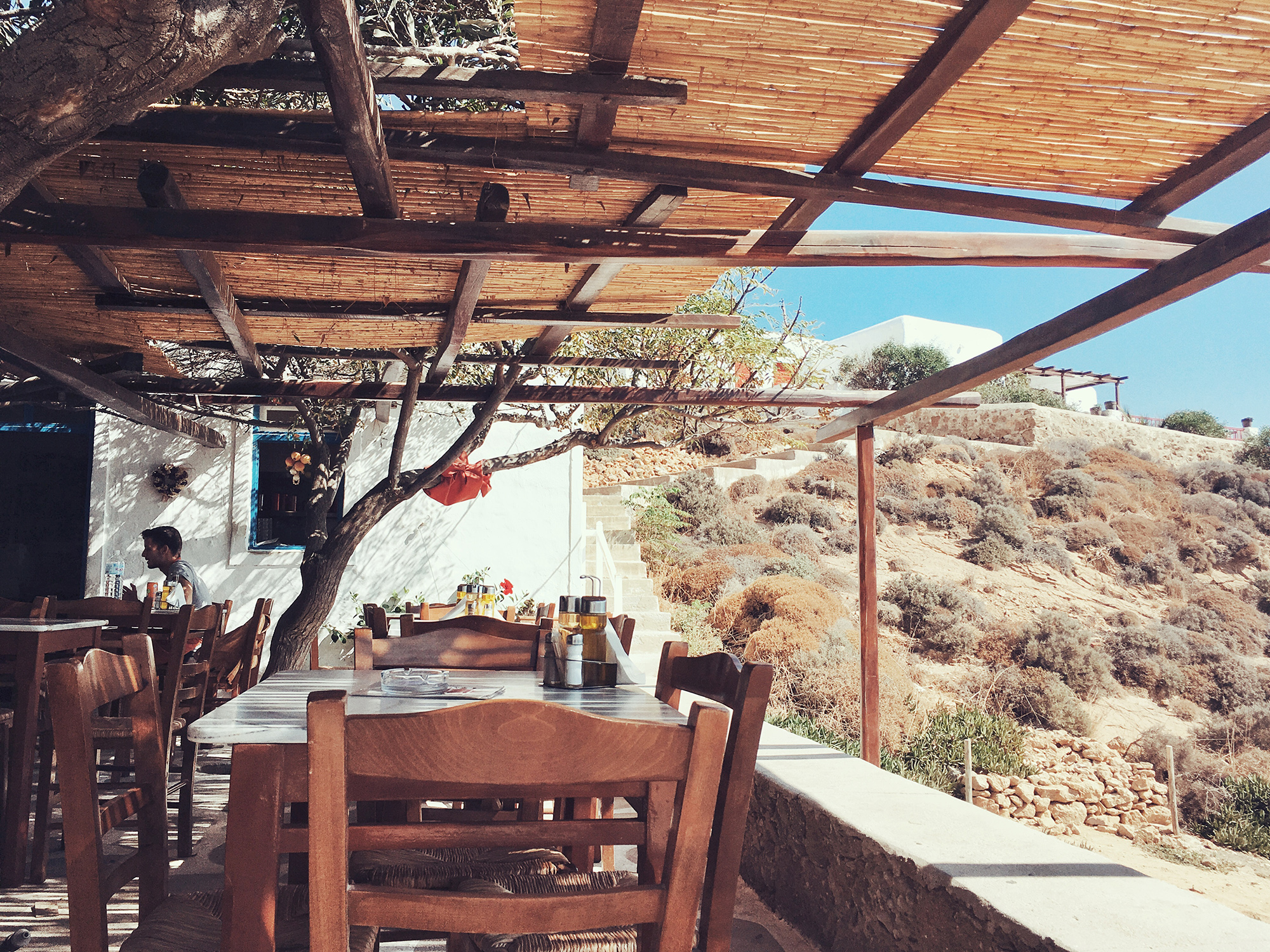 The best seats in the house!

Late risers (a.k.a. the under-researched and unprepared) who arrive later in the day undoubtedly have to wait longer. Whatever you do, don’t arrive too close to sunset or risk missing out on the best meal you’ll experience on Mykonos.

Pass the time by drinking a glass of complimentary rosé (from a box, ‘natch) or leave your friend/significant other as collateral (to hold your place in line) and head down to the nearby beach for a refreshing swim. 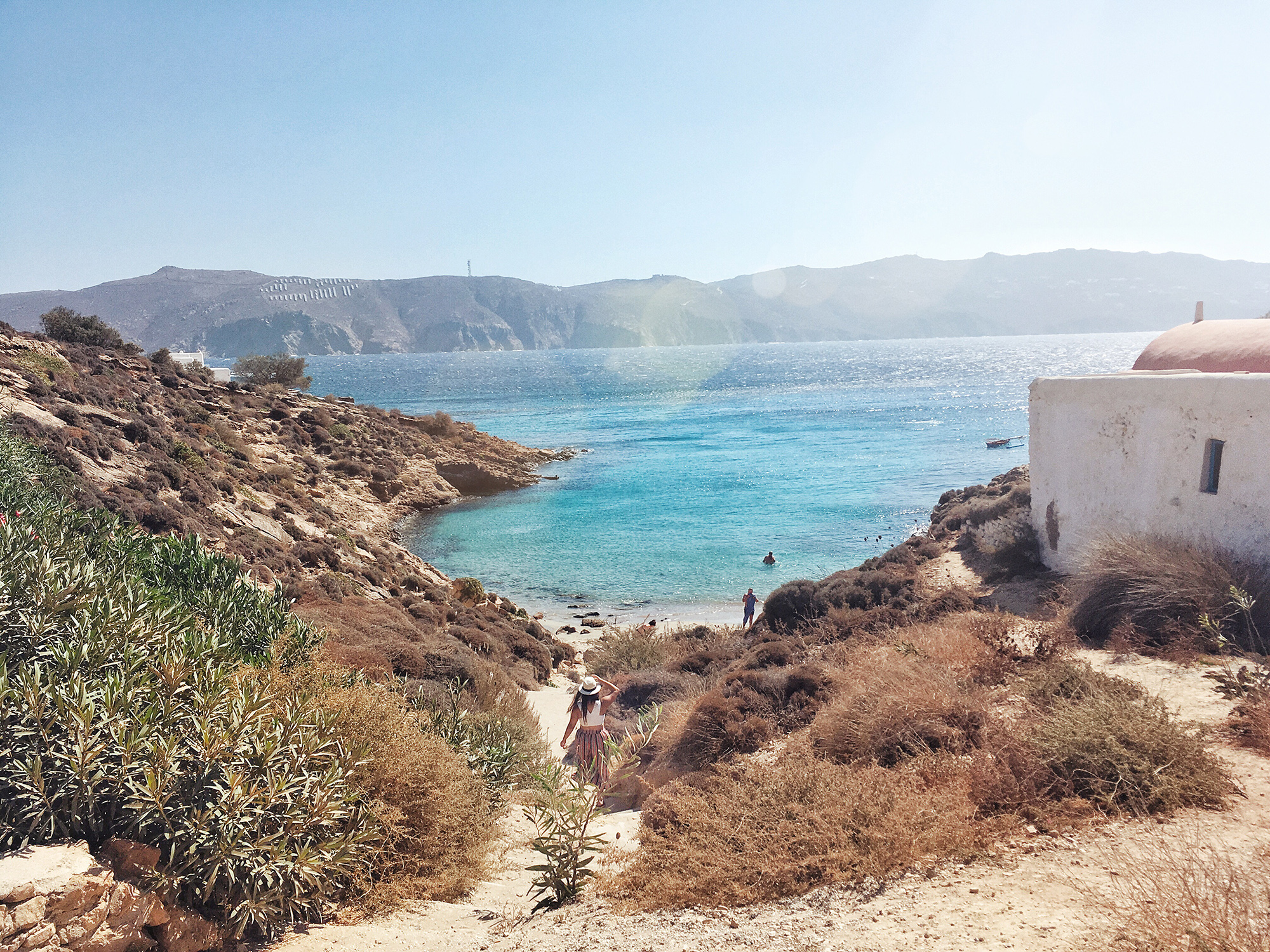 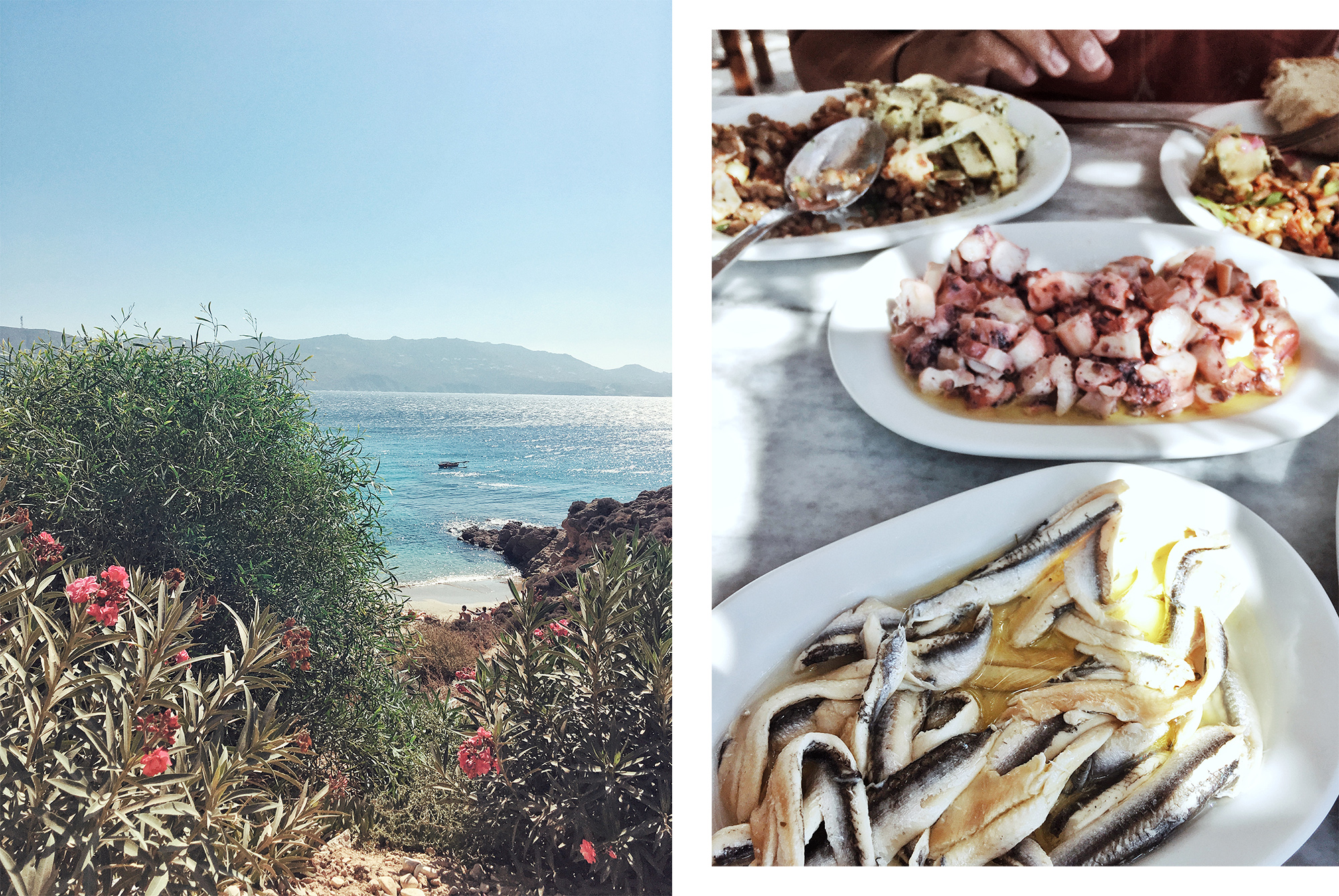 By time we were ushered to our rickety wooden seats in Kiki’s Tavern, I was brimming with excitement (and extreme hunger) in anticipation of the forthcoming meal. I took the requisite amount of time to appreciate our prime spot with a panoramic view of the surrounding landscape before sprinting to the back of the restaurant.

There is a veritable buffet of fresh salads where you can load up a plate of 2 salad choices for a mere €9 – my favourites being the creamy chunks of beet, a satisfying mix of lentil and feta, the dill potato salad, and the zesty artichoke. 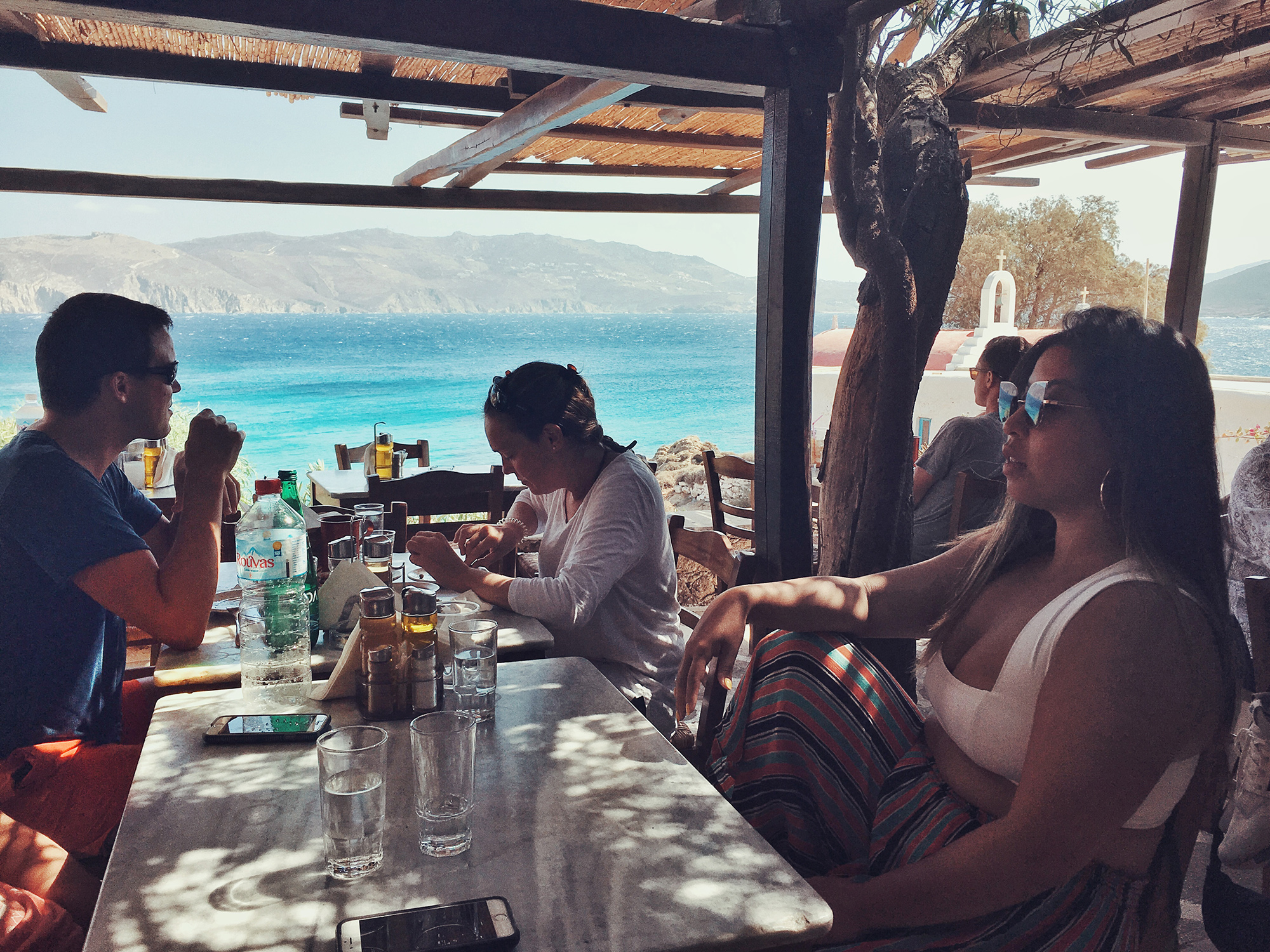 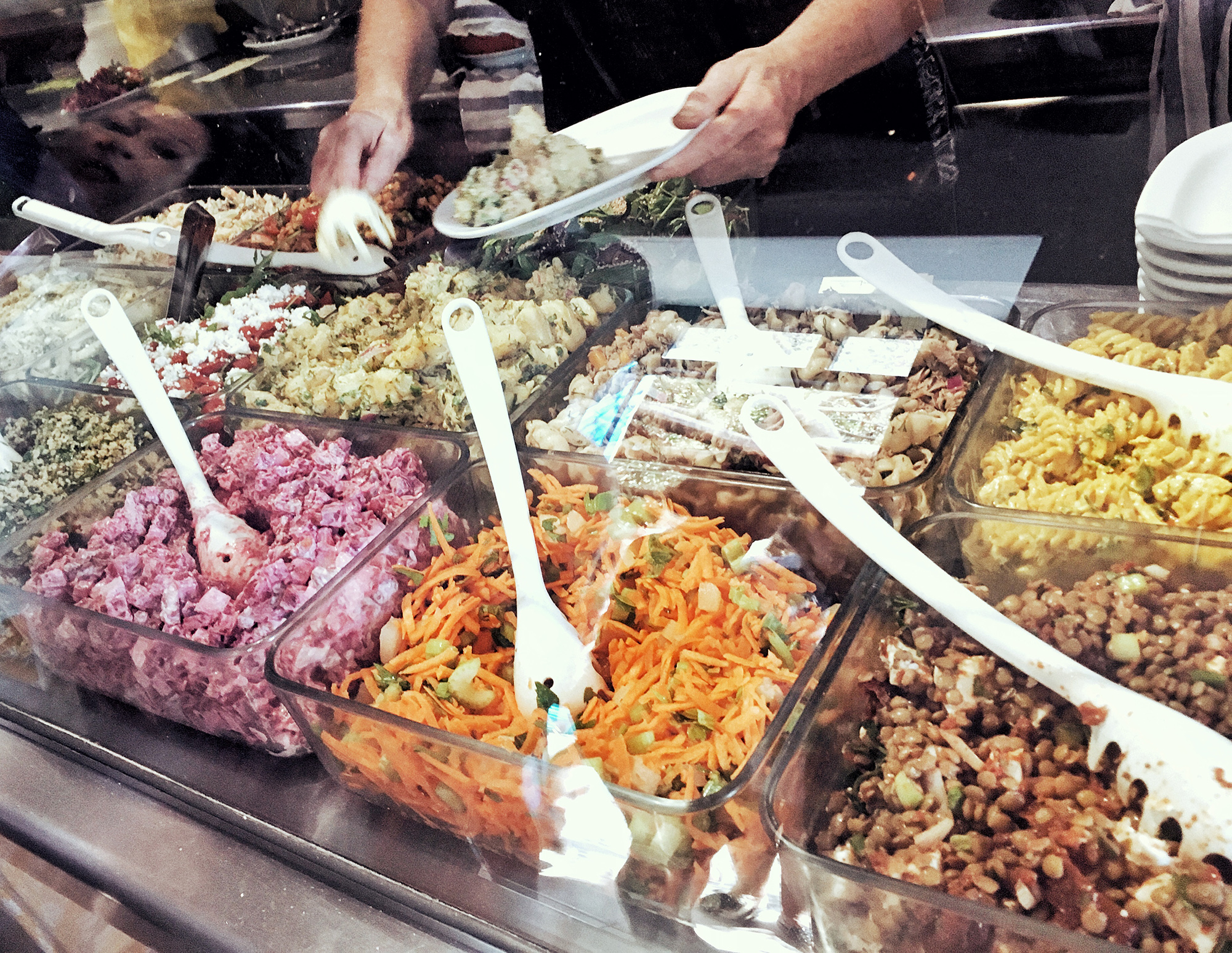 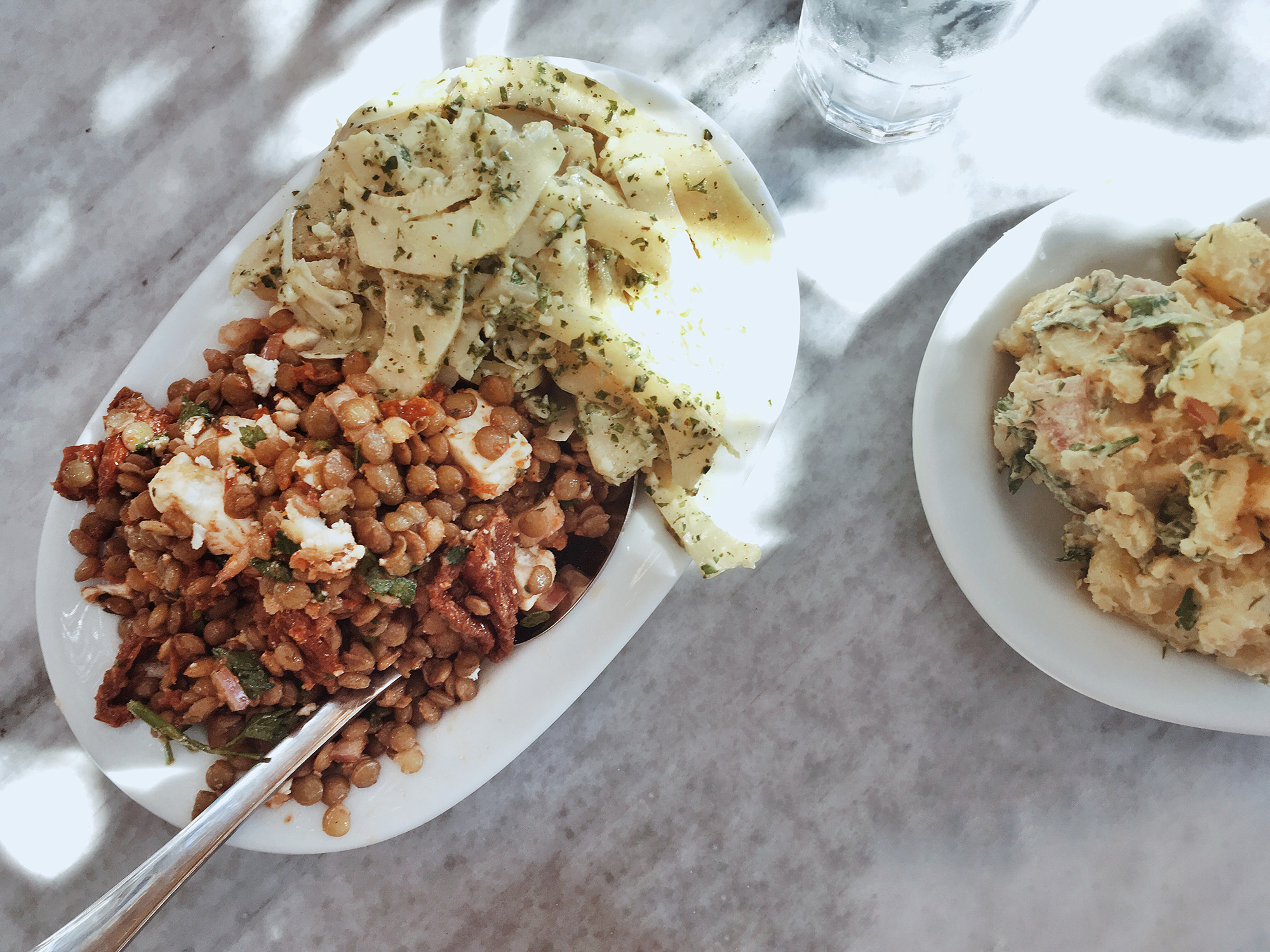 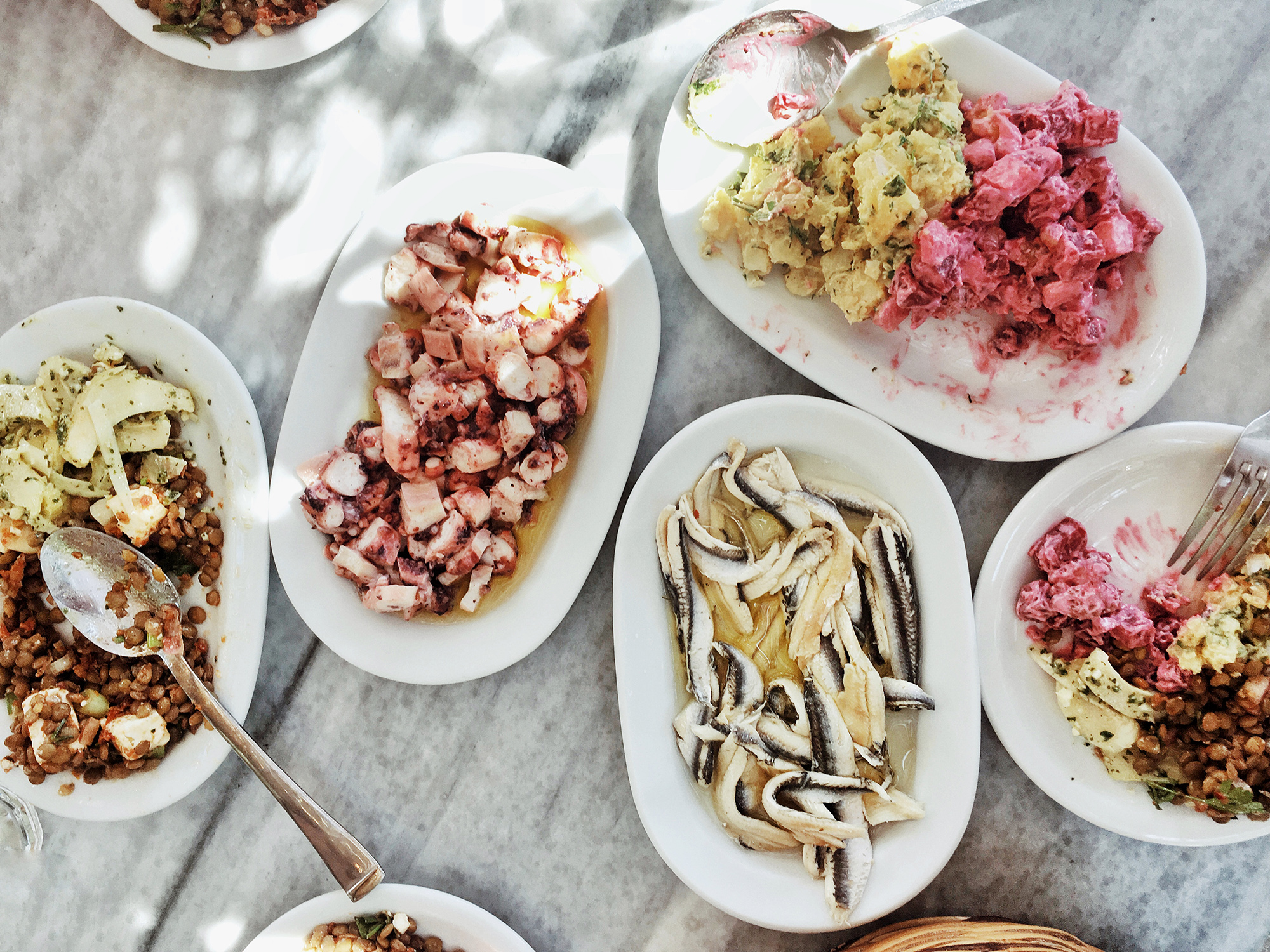 Marinated octopus and sardines w/ a variety of salads

My in-seat happy dance only intensified when the other appetizers arrived to the table,  just as tasty and fresh as the salads. The marinated anchovies were piled on a platter and generously drizzled with fresh olive oil while the meaty chunks of octopus in vinegar had a refreshing tang that paired perfectly with the velvety potato salad. 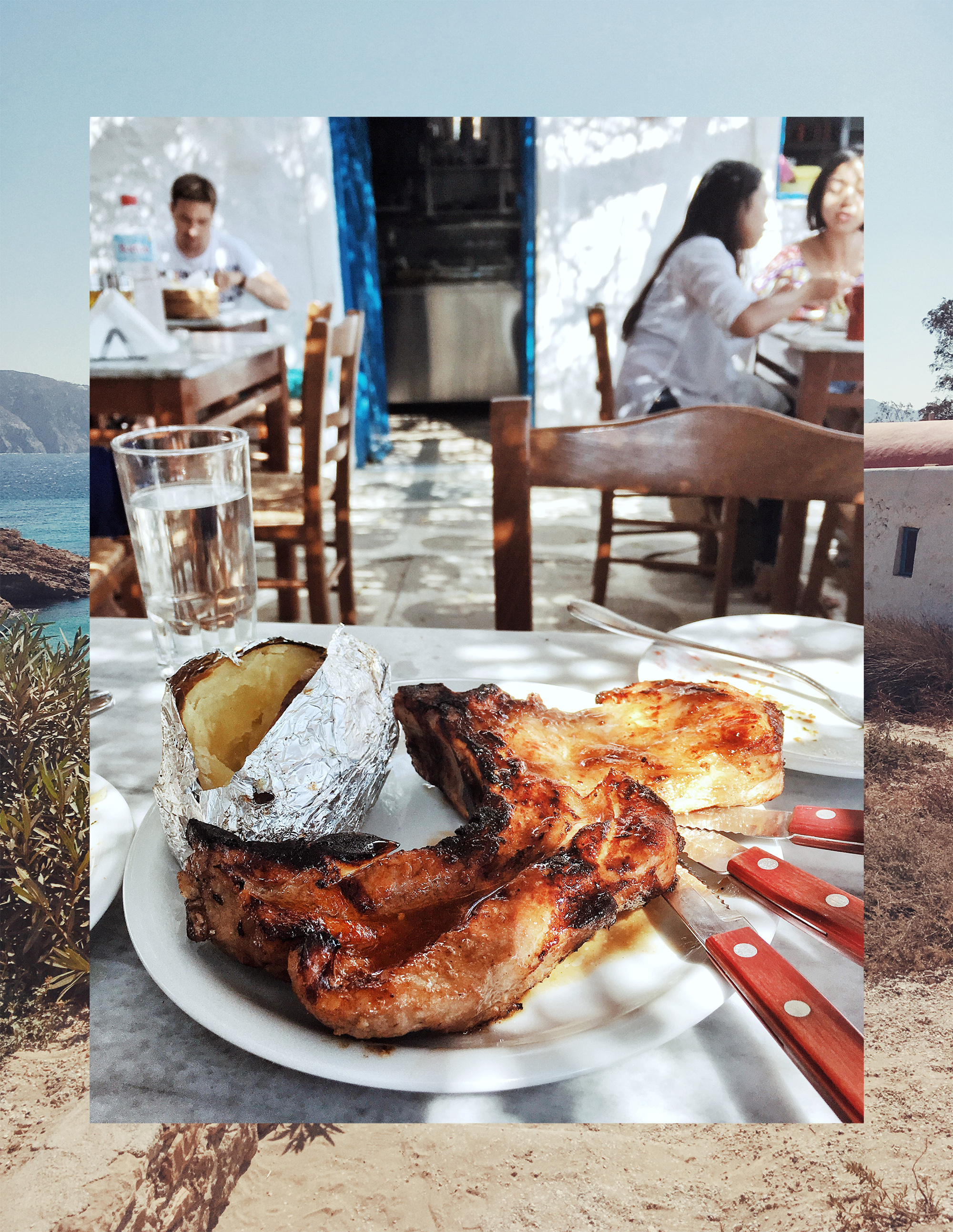 Now for the pièce de résistance – the monster-sized grilled pork chop. This arrived to the table a bit later on in the meal as it was being cooked on a grill while we enjoyed the cold dishes but MAN is it worth the wait. Accompanied by a twice baked potato wrapped in foil, the pork chop was tender, juicy and the size of your head!!! That is, if you have a prehistorically large noggin. 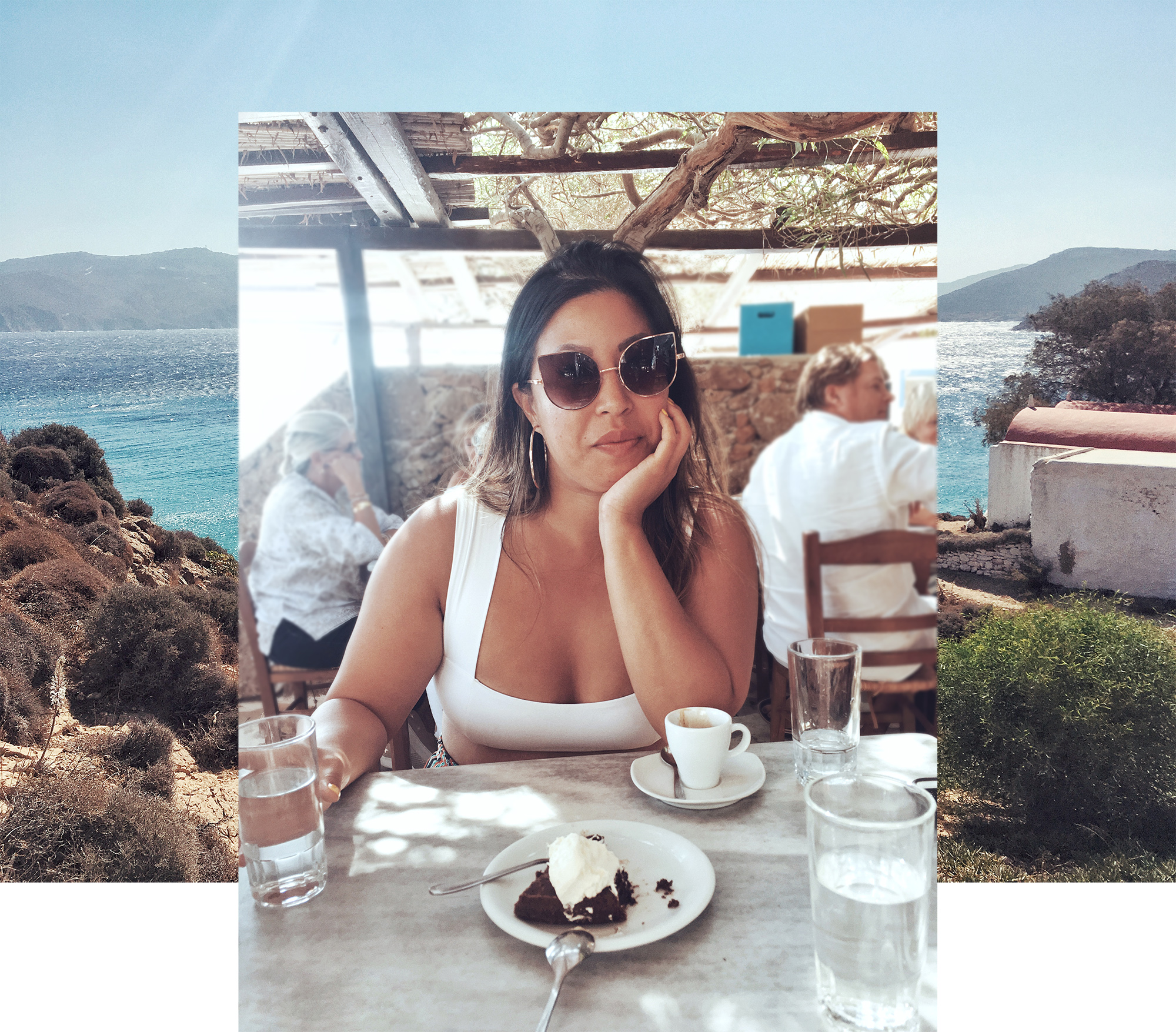 After that amount of food, a non-masochistic person would refuse to look at the dessert menu while simultaneously unbuttoning their pants as classily as they could manage.

But I’m a glutton for punishment. Or just a glutton.

Since the only pants I wear are stretchy (and lack buttons), I ordered the chocolate cake with fresh amaretto cream that Kiki’s Tavern is known for. It was so rich and indulgent that it brought a single manly tear to my eye. 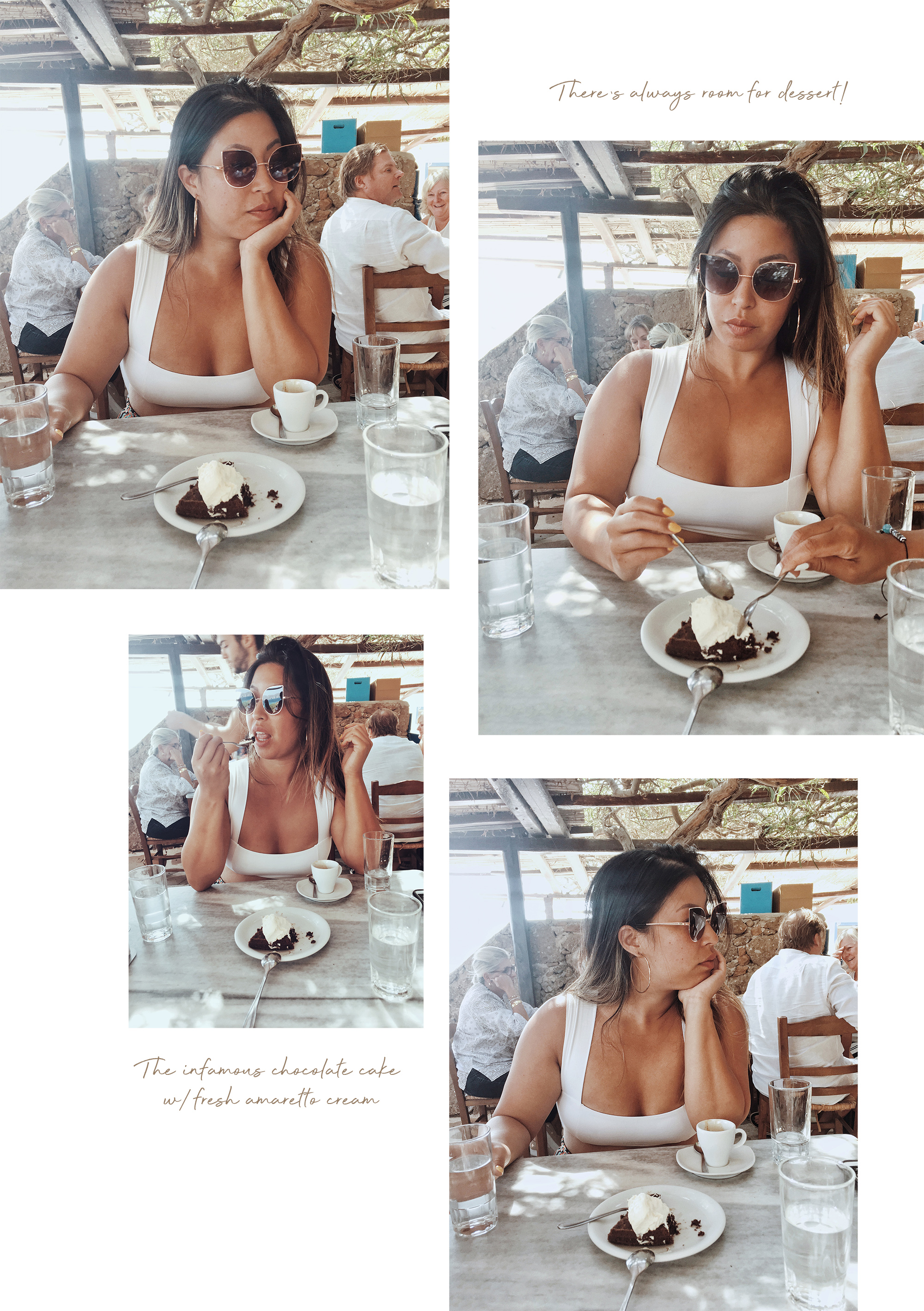 Since you’ve already trekked all the way north of the island, head over to the nearby idyllic and mostly-secluded Agios Sostis beach. Rest that food baby by lying out and working on your tan or cool off in the turquoise Aegean sea surrounded by rolling hills.

If it hadn’t been for the massive line outside of Kiki’s as we asked Vassilis to call us a taxi later that afternoon, I would’ve considered eating dinner there as well! 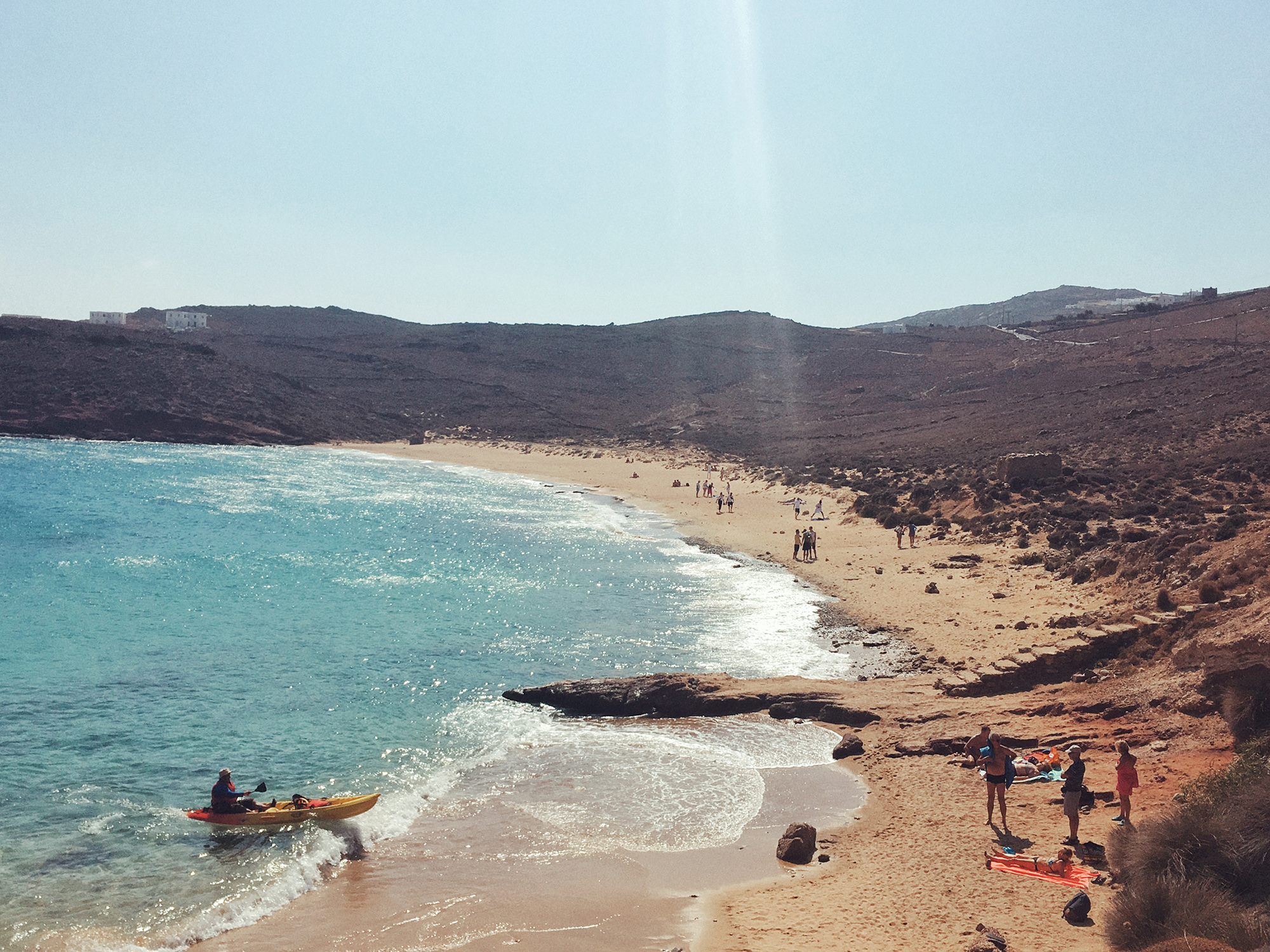 Kiki’s Tavern was more than just about the drool-inducing food (although a lot of it was about the food). It was an experience that was a bright spot during my entire trip to Mykonos. From the community vibe and the friendly staff that made you feel like one of the gang to the gorgeous beach nearby, Kiki’s is a must-visit.

Chances are that if you’re headed to the Greek Islands that Mykonos is not your only stop. If you’re trying to decide which other islands to visit, I can give you 7 reasons why Milos should be it. 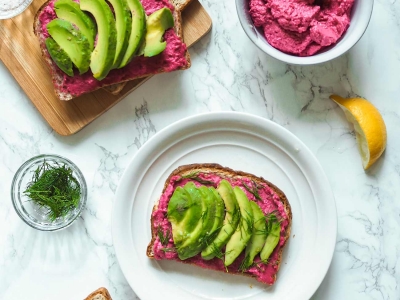 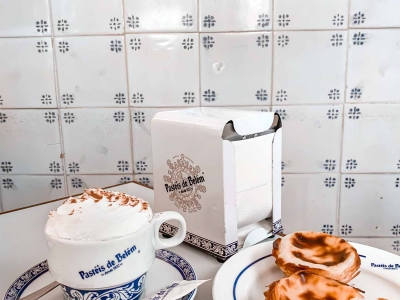 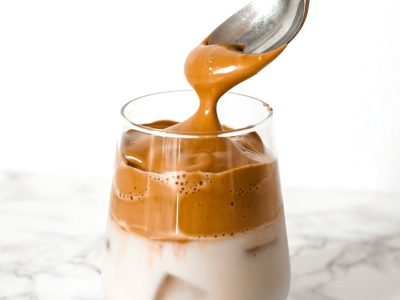